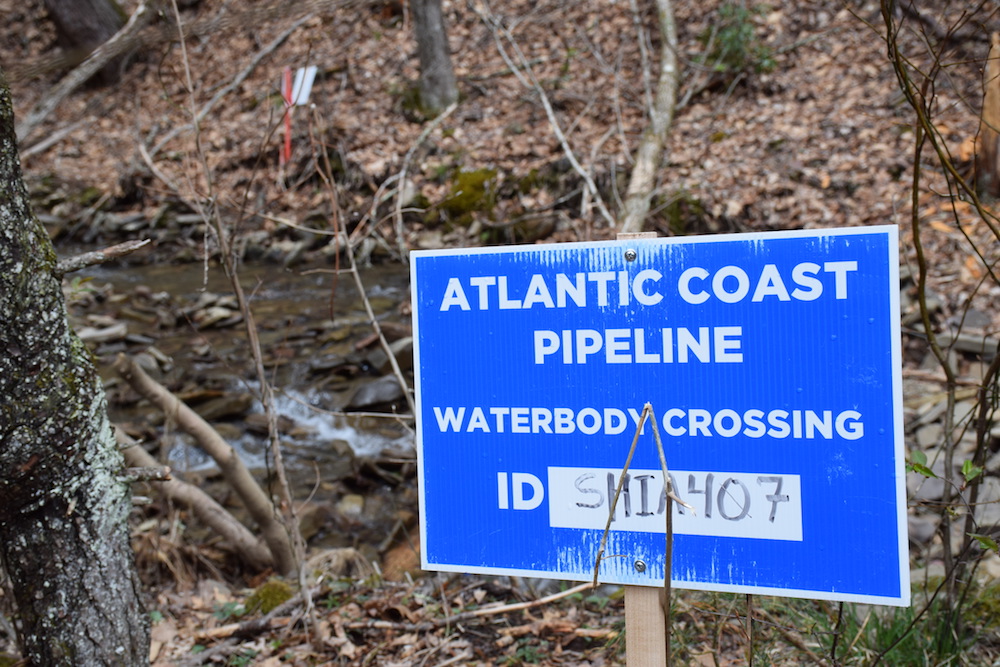 In a disappointing move, the Virginia Department of Environmental Quality approved several key plans on Oct. 19 needed to make effective the state water quality certification for Dominion Energy’s Atlantic Coast Pipeline to begin construction in the commonwealth. The final stormwater management, karst protection and erosion and sediment control plans were the final piece required by state regulators for Atlantic Coast developers to begin trenching and blasting through rock, soil and waters in Virginia. The same day, Dominion asked for the final sign-off for construction in Virginia from the Federal Energy Regulatory Commission, which has a decades-long history of rubber stamping pipeline projects.

In giving the go-ahead for this unneeded $6.5 billion fracked gas pipeline, DEQ is ignoring the danger posed to hundreds of streams, rivers and wetlands along the pipeline’s 300-mile path through the state. The pipeline’s proposed route snakes 600 miles from West Virginia, through Virginia and into North Carolina, often on very steep slopes. While Dominion is Atlantic Coast’s lead developer, Duke Energy and Piedmont Natural Gas are also investors.

Construction on 21 miles of the pipeline through the George Washington and Monongahela national forests in Virginia remains in limbo as parties await a decision from the U.S. Fourth Circuit Court of Appeals on a challenge to a permit from the U.S. Forest Service. The same type of permit was vacated by the Fourth Circuit for the Mountain Valley Pipeline in April.

In a news release, Virginia Secretary of Natural Resources Matthew Strickler stated, “After more than a year of detailed analysis, all aspects of these plans have been carefully reviewed, modified and intensified before being approved by DEQ.” Given the Northam administration’s assurances about the permits it issued for the Mountain Valley Pipeline, we take cold comfort in the secretary’s statement. (See here and here, for starters about the significant water contamination problems with Mountain Valley’s construction.)

In August, the Governor’s Advisory Council on Environmental Justice recommended that the Clean Water Act Section 401 permits for the Atlantic Coast and Mountain Valley pipelines be “rescinded immediately,” and also asked Gov. Ralph Northam to direct the DEQ to suspend the air quality permitting decision for the Buckingham Compressor Station in the community of Union Hill.

Some of the council’s concerns include: a disproportionate impact on the predominantly African American community of Union Hill that “could be perceived as exhibiting racism in siting, zoning and permitting decisions and public health risk; an inadequate assessment of water quality impacts from the ACP and MVP; the impact of methane from the pipelines on climate change; and whether additional natural gas pipeline capacity is even needed.

After thanking the council in a letter for their work to improve environmental justice in the commonwealth, Secretary Strickler completely brushed off the council’s concerns — instead placing the blame on FERC for making decisions “without the kind of thoughtful review we would have required.” He followed that up by stating that FERC’s decisions “preclude us from taking many of the actions that landowners, conservationists, and environmental justice advocates have asked us to take.”

If Secretary Strickler and Gov. Northam really wanted to advance environmental justice in the commonwealth, they would oppose these dangerous fracked gas pipelines being built through several minority and low-income communities in Virginia, rather than acquiescing to FERC’s rubber-stamp approval process.

In the last four months, the construction of fracked gas pipelines across steep terrain strikingly similar to Atlantic Coast’s and Mountain Valley’s routes has contributed to two explosions.

In September, a section of Energy Transfer Partners’ Revolution Pipeline — which was still in testing phases and had only been operating for a week — exploded and burned down a home in Beaver County, Pa. Officials believe a landslide brought on by heavy rains is partially to blame for the blast, barely three months after a landslide caused TransCanada’s six-month-old Leach XPress pipeline to explode and scorch 10 acres in Morgantown, W.Va.

Both the 24-inch diameter Revolution and 36-inch Leach XPress pipelines were essentially brand new, and are significantly smaller than the gargantuan 42-inch Atlantic Coast and Mountain Valley pipelines.

Gov. Northam and Virginia regulators need to step up and shut down all further construction on the Atlantic Coast Pipeline until site-specific reviews of the project’s work areas are adequately reviewed. Virginia’s people and natural environment deserve at least that much.