How stopping a massive fracked-gas project in Virginia upholds justice, protects communities, and advances climate stability for all 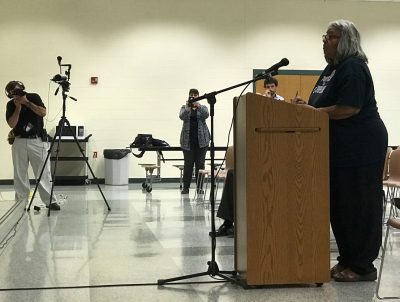 Ruby Laury of Union Hill, whose farm would be directly impacted by the project, speaks at the public hearing in Buckingham County in Sept. 2018.

For the last four years, citizens of rural Buckingham County, Va., — the very heart of our commonwealth — have steadfastly opposed and worked to stop Dominion Energy‘s proposed fracked gas compressor station for its Atlantic Coast Pipeline. The massive 54,000-horsepower industrial facility would run 24/7, creating toxic air emissions and near-constant noise pollution, harming the health and well-being of nearby communities. It would threaten numerous slave cemeteries, known and unknown in the historically African-American community of Union Hill. And it would also forever alter the quiet rural atmosphere that so many in the community value.

In the citizens’ view, the air pollution, negative health effects and impacts to historical resources are reason enough to not build the compressor station. And there are even more layers to this smelly toxic onion of a scheme that is the pipeline and compressor station, reasons that not only validate the local community’s desire to stop the project, but reasons for all Virginians to oppose it as well.

According to a study conducted by anthropologist Dr. Lakshmi Fjord, the community within a 1.1-mile radius of this proposed compressor station is an environmental justice community, where more than 83% of households are people of color, 33% are descendants of freedmen, and the numbers of elderly (70+) and the very young (0-6) are disproportionately higher than other age groups. Under Virginia law, it is the policy of the commonwealth to “[e]nsure that development of new, or expansion of existing, energy resources or facilities does not have a disproportionate adverse impact on economically disadvantaged or minority communities.” If built, the compressor station would violate the very policy that is supposed to stop environmental racism set by our own state government.

By now, I’m sure many of you are aware of the recently released report, in which the world’s top atmospheric scientists issued their most urgent pleas ever for governments around the globe to address the dire impacts of climate change. Though natural gas produces fewer pollutants than coal when it is burned, when it is emitted directly into the air as methane, it has a climate-warming effect 84 times greater than carbon dioxide over the first 20 years.

If we wish to protect our coasts, our forests, our farms and the communities across our state, we cannot continue to invest in fossil fuel infrastructure. Period.

Electricity use in our region has plateaued, and growth is projected to remain flat for years to come according to PJM, the regional transmission organization that coordinates the sale of wholesale electricity in Virginia and 12 other states and Washington D.C. We do not need more natural gas infrastructure to keep the lights on. 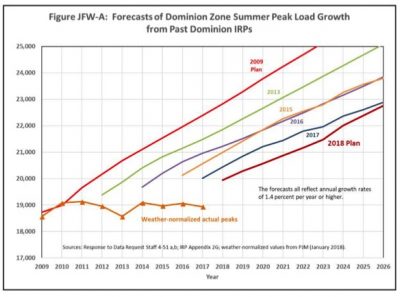 ACP, LLC, the pipeline partnership whose largest investors are Dominion Energy and Duke Energy, wants to invest in this project because they’ll make a profit. Due to perverse incentives at the federal level, they are guaranteed a 14% rate of return at little risk to shareholders, no matter whether a single drop of gas ever passes through the pipeline. In order to justify the investment to regulators, Dominion has consistently produced faulty predictions of future electricity demand, as shown in these charts (courtesy the Southern Environmental Law Center).

Before the pipeline project can move forward, including the compressor station in Buckingham County, Dominion must acquire an air pollution permit from the Virginia Department of Environmental Quality and Air Pollution Control Board.

Over the summer, hundreds of Virginians submitted comments and concerns about the draft air permit under consideration during DEQ’s 35-day public comment period and at a public hearing in Buckingham on September 11. You can find a recap of the hearing here. On November 8 and 9, the DEQ will present its recommendation and a summary of public comments to the Air Pollution Control Board, which will then be poised to vote the permit up or down. Any person who commented during the public comment period will be allowed to address the board directly at the meeting.

We urge everyone who is able to attend to go! If you cannot be there, please encourage friends and family to go in your stead. Whether you plan to speak or not, it is important that the board see how many Virginians oppose the project. The Union Hill and Buckingham community do not want this compressor station.

We need to show them that the rest of the Virginia stands with them. On November 8 and 9, the DEQ and Air Pollution Control Board will know that Virginia’s citizens support clean air, environmental justice and the heart of Virginia.