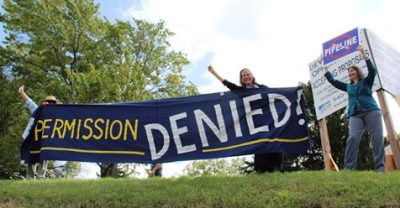 On June 21 in Richmond, Va., the Fourth Circuit Court of Appeals granted a stay of a crucial permit that the fracked-gas Mountain Valley Pipeline needs in order to build across waterways in West Virginia.

This action comes as a huge relief. “Putting the breaks on in-stream construction activity for the Mountain Valley Pipeline while the court performs its full review not only makes sense, it is also the only just outcome for communities directly impacted by this destructive project,” said Appalachian Voices Virginia Program Manager Peter Anderson.

Under section 404 of the Clean Water Act, the Army Corps of Engineers issued a permit that allows the project’s builders to trench through the bottom of hundreds of waterways in West Virginia,, including the Greenbrier, Elk and Gauley rivers, and fill the crossings with dirt during construction of the pipeline.

The permit issued to the Mountain Valley Pipeline by the Corps is commonly known as a “nationwide permit 12,” which takes a one-size-fits-all approach. For months now, citizens have been concerned by the lack of specificity and nuance of this permit.

The Mountain Valley Pipeline is a 300-mile-long, 42-inch pipeline requiring a 125-foot right-of-way construction zone that would cross streams, rivers and other bodies of water in West Virginia and Virginia more than 1,000 times. Because the project’s own documents show it cannot meet the conditions required under the nationwide 404 permit in West Virginia, the permit issued by the Corps is technically unlawful.

The effect of the court order is to prohibit construction activities along the pipeline’s route in 591 streams and wetlands in West Virginia. The order may also affect construction along the entire route of the pipeline because, under its Federal Energy Regulatory Commission authorization, pipeline construction is allowed only if the developers have secured all federal authorizations. On June 26, Appalachian Voices and our partners, represented by Appalachian Mountain Advocates, filed a petition with the court to review suspension of MVP’s Corps permit for construction in Virginia.