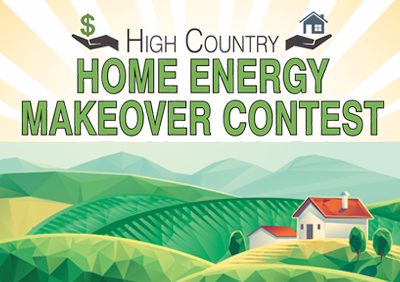 The team had a busy week evaluating the applications. The large majority of applicants struggled with high energy bills this past winter, and said they were looking for upgrades to their home to help mitigate the problem of high bills for next year, while making their homes more comfortable to live in.

It was difficult picking the finalists from among the many deserving applicants, and we found ourselves wishing we could update the homes of all of them. Many applicants, however, likely qualify for free grants through the federal Weatherization Assistance Program (WAP), which is administered through local community action agencies. In the High Country, this is either WAMY Community Action or Blue Ridge Opportunities Commission and we did our best to connect as many qualifying applicants as possible with these agencies.

The finalists we chose are most likely not eligible for these programs, but also cannot afford to pay for the energy improvements on their own or may not qualify for financing. Unfortunately, there are countless families in our region that fall into this income gap, which is why Appalachian Voices continues advocating for electric cooperatives in western North Carolina to provide debt-free financing tools that allow residents and local economies to benefit from widespread energy-efficiency improvements.

We are pleased to introduce our five finalists, who each received a free energy audit on their home from John, of reNew Home. We’ll be evaluating the results in the coming weeks and announce a grand prize winner who will receive up to $4,000 in home energy improvements. Stay tuned! 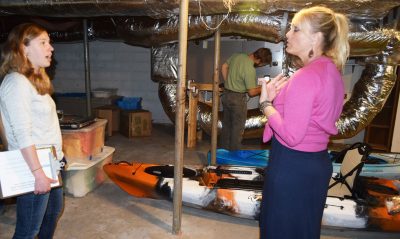 Dana bought her home in Sparta for herself and her two children when she accepted a teaching job at the local middle school. She made it a priority to install a new HVAC system to heat her home more efficiently. She also had her ductwork insulated, but the energy audit showed there were still leaks that need to be sealed.

The most challenging problem in Dana’s home is her largely uninsulated roof. While the cathedral ceiling in her kitchen and living room areas is beautiful, it would be difficult and expensive to retrofit, since there is no space to add insulation. Many houses in the High Country are far from meeting today’s code standards for insulation, and lose heat in the winter and cool air in the summer very quickly, making electric bills soar in both seasons. 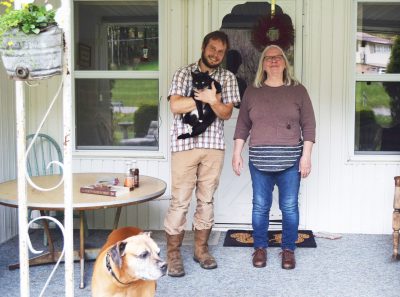 After leaving Charleston, S.C., to move to Creston., Maureen was excited to settle down in a milder climate. However, with unusually low temperatures, she struggled with keeping her home comfortable while keeping her bills affordable this past winter.

Her house was built in the 1800s and is heated with an electric HVAC system. Maureen also has a back-up gas fireplace for extra chilly mornings and evenings. These fireplaces are a pleasant source of warmth in the winter, but they can become a carbon monoxide hazard if they are not vented or properly monitored. John was able to conduct tests to make sure they were safe and functioning properly..

We also found that Maureen’s home is poorly insulated, with nothing at all in the walls, which is unsurprising considering its age. John was surprised that her energy bills weren’t higher after seeing how leaky her home was during a “blower door” test, which is done during a home energy audit to find air leaks around the house. The test pulls air out of the house through the doorway, measuring the rate that air flows through the home’s leaks and gaps. The auditor uses a thermal imaging camera to determine exactly where the leaks are. After doing this to Maureen’s home, John determined that her home would benefit the most from insulating her walls and floor, as well as reducing her attic air leakage. 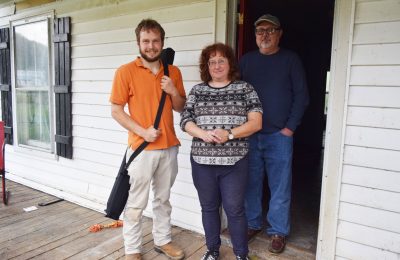 John Kidda (l) at the home of the Wilsons.

Nancy and her family live in Creston, in an old farmhouse built around 1895. Nancy has a Ph.D. in chemistry and works at Appalachian State University. Although the house is beautiful architecturally, we found many issues that are contributing to her high energy bills. Nancy is heating her home with portable heaters, which are extremely inefficient. Portable heaters are good for supplemental heat during cold mornings, but can become very expensive very quickly when used as a main heat source. Since the home is old, it has virtually no insulation. As with Dana’s home, this poses a huge challenge to keeping heat in the home.

Even with a decent salary, after all of her family’s other expenses, Nancy cannot easily afford to upgrade her home. Many people in our area find themselves in a situation like Nancy’s — they have a good job but do not have the extra money to upgrade their homes. Making your home more energy efficient will really pay off in the long run, but getting the money to pay for it up-front can be very difficult. Nancy’s home would most benefit from insulation and installing a more efficient heating source. 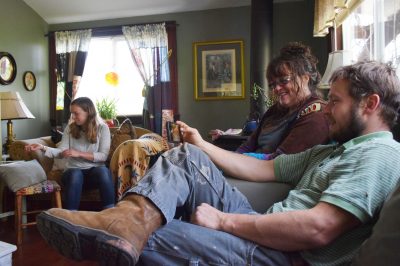 Kathy and her son live in Sparta, in a home that has relatively decent insulation compared to many in the High Country. Despite the insulation, it could benefit from weatherstripping and caulking to seal air leaks.

Her home is heated by an eclectic mix of heat sources including a gas fireplace, electric baseboard heaters and a wood stove. This house has a lot of additions, and often with additions we see inconsistent mixtures of insulation and heating methods. We had the same concerns about Kathy’s home and the fireplace as we did with Maureen. John conducted the same tests, but still didn’t recommend using the fireplace because she had various other heat sources. We also found that Kathy relies on inefficient and costly baseboard heaters. And while wood stoves are popular, wood can get expensive if you cannot supply it yourself.

Due to Kathy’s various heat sources, she was having trouble paying so many separate bills from this past winter. She does her best to keep up with them all but she still had to get assistance from her local service agency, Alleghany Cares. Kathy’s home would benefit the most from sealing up leaky areas and replacing her gas fireplace with a ductless heat pump. 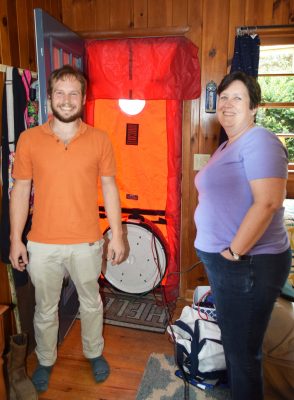 Amy bought her home in Boone last summer, intending to live in it year round, even though it was originally built as a summer home. She lives alone and her energy bills are extremely high, as much $308 in February this past year. As a single woman in a 624-square-foot home, this is a very unaffordable bill. Amy’s annual energy cost per square foot is about $2.25 which is almost a dollar higher than the U.S. average of $1.21. Everything in her home, from appliances to heating, runs on electricity and her main heating source is electric baseboard heaters — one of the most inefficient ways to heat a home.

Amy says the energy audit helped her to see what her home really needed. “Even with wearing lots of layers and trying to conserve as much energy as I could, I still had high electric bills. Being picked as one of the five finalists, and having the energy audit done, was really great! I learned so much from John Kidda’s thorough report, and now I know what needs to be done to have warmer winters in the future.”

During Amy’s audit we also found that her home was most likely weatherized by the WAP program a few years ago before she moved in, making her ineligible for further free federal weatherization. Amy could benefit the most from replacing her heating source.

All of our finalists had high energy burdens, meaning that they spend a larger percentage of their incomes on energy costs than the average U.S. household. None of the finalists would qualify for the WAP program, so they have few, if any options to fix their home unless they take out a loan or pay out of pocket. In the High Country, and Appalachia as a whole, there are many people who fall in the gap between being able to afford a loan for home improvements and qualifying for federal weatherization assistance.

This issue can be addressed by the electric utility that serves this area. Blue Ridge Energy serves a large area of the High Country, and as an electric cooperative, it is supposed to operate in a way that benefits all of its customers. Electric co-ops across the county have access to up to $6 billion in federal loans every year in order to create and fund programs that could help fill this gap. So far, Blue Ridge Energy has decided to leave that money on the table and instead, created a loan program for which many in the area cannot qualify.

An outdoor adventure enthusiast with a special connection to mountains, Becca has a degree in sustainable development and conservation. She is serving as our AmeriCorps Energy Savings Outreach Associate for the 2017-18 service year.