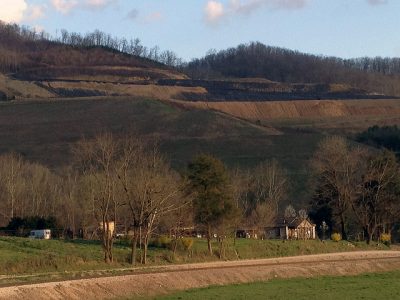 The National Mining Association shrugged when a review of research linking mountaintop removal to human health impacts was halted. But the NMA does not speak for coal communities.

Last month, West Virginian Bil Lepp authored a letter in the Charleston Gazette-Mail regarding the U.S. Department of the Interior’s decision to halt a review of research linking mountaintop removal coal mining and impacts to human health.

In his letter, Lepp calls out the National Mining Association and cites its skepticism of the review, which was led by the National Academy of Sciences and already well underway.

“The National Mining Association is saying that because mountaintop removal is such a small part of the mining industry, the people affected by it simply aren’t worth worrying about,” Lepp wrote. “They are saying, ‘Even if this process is bad for the people who live near it, who cares? There are not enough of them to matter to us.’”

In response, National Mining Association President Hal Quinn submitted his own letter to the Gazette-Mail. In it, he claims that because the National Institute of Environmental Health Sciences already reviewed some of the studies, the additional review by the NAS (which is independent and non-governmental) is unnecessary. “We applaud and support legitimate efforts to improve health and safety in and around mines, but this study was a symbolic gesture left over from an anti-coal administration,” Quinn wrote.

Quinn wants it to seem like the NMA cares about miners and coal communities. But nothing could be further from the truth. The NMA openly opposes multiple efforts that would benefit coal communities.

The National Institute of Environmental Health and Sciences study Quinn mentioned in his letter does not actually make additional review unnecessary. Rather, that study concluded:

Improved characterization of exposures by future community health studies and further study of the effects of MTR mining chemical mixtures in experimental models will be critical to determining health risks of MTR mining to communities. Without such work, uncertainty will remain regarding the impact of these practices on the health of the people who breathe the air and drink the water affected by MTR mining.

The much more robust review being conducted by the NAS was a step toward conducting some of that work.

More than two dozen peer-reviewed studies show strong links between living near mountaintop removal mines and suffering from negative health effects. The industry likes to suggest that regional health disparities are due to other problems, but researchers control for these socioeconomic factors. Poverty and public health issues are critical problems in Central Appalachia, but they have been problems for decades, even when the coal industry was booming. An economy based on a single extractive industry has done little to lift the region out of poverty, despite what the industry may claim.

One example of how the NMA is holding coal communities back is its opposition to the RECLAIM Act, a bill that would direct $1 billion from the Abandoned Mine Land Fund over the next five years to reclaim post-mined land for the economic benefit of the region. All five members of West Virginia’s congressional delegation are co-sponsors of the RECLAIM Act.

Not only does the NMA oppose the RECLAIM Act, it opposes the Abandoned Mine Land Fund as a whole. The fund is dependent on a tax on current coal production, and the revenue is spent on mines abandoned by coal companies prior to the passage of the Surface Mining Control and Reclamation Act in 1977. Without the fund, taxpayers would likely be responsible for the cleanup of these sites.

The NMA claims that the fund has been mismanaged since coal companies have paid in more than $10 billion while only $2.8 billion has been spent on priority sites. Priority 1 sites pose a direct risk to human health and safety — an open mine portal or unstable land near communities, for example. Thankfully, these sites do not make up the majority of abandoned mine lands. Much of the land does not pose a direct threat to people, but it does hamper economic growth; it may be unsuitable for development in its current condition or deter nearby growth. Many sites have ongoing problems with soil and water contamination, erosion and revegetation.

In reality, $8 billion of the fund has been distributed, including $5 billion distributed to states and tribes and more than $1.4 billion transferred to the United Mine Workers of America Health and Retirement Funds. So, the NMA is upset that $1.4 billion has been spent to ensure that miners have health care and retirement benefits, rather than for Priority 1 sites.

Currently, only about $2 billion of the fund actually remains unappropriated. As of 2015, there were an estimated 6.2 million acres of abandoned mine lands yet to be reclaimed. The cost of that reclamation is estimated at $9.6 billion. That funding shortfall is poised to remain if the Abandoned Mine Lands Fund is not reauthorized by Congress. The fund is set to expire in 2021.

This week, the NMA is holding a private board of directors meeting at the Trump International Hotel in Washington, D.C. Interior Secretary Ryan Zinke was invited to speak at the meeting. The invitation is no surprise, given Zinke’s recent favors to the coal industry including repealing a moratorium on new coal leases on public lands and reducing royalties companies must pay to the government. Brendan Fischer, an election law expert with the Campaign Legal Center, told The Intercept, “the National Mining Association or any other lobbying group has likely concluded that spending money at the Trump International Hotel in D.C. is a solid way of currying favor with the administration — and that spending money anywhere else runs the risk of offending our very sensitive president.”

The NMA spins stories to serve the interests of coal industry executives and shareholders, even at the cost of coal-impacted communities. While it may be the official voice of U.S. mining, it does not speak for the communities that suffer the consequences of mountaintop removal.