Appalachia’s forests feature an especially concentrated diversity of medicinal plants. From the famous ginseng to lesser-known false unicorn, many of these plants are valued in today’s herbalism industry.

A traditional culture of harvesting plants like ginseng and ramps from the region’s expansive forests has long helped to sustain area families. Now, a movement called forest farming is emerging to grow these plants in private forestland to decrease strains on plant populations and strengthen the market for Appalachian botanicals.

Shafts of afternoon sunlight dapple the forest floor. A path bordered by partly rotten branches angles across the slope. Just beyond are patches of black cohosh, ginseng, goldenseal and bloodroot. A high fence only 10 feet away marks the border with neighborhood backyards, built some years after the first ginseng was planted here 50 years ago. 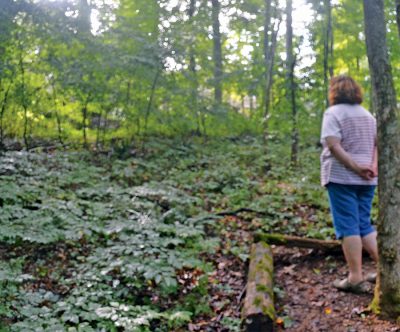 Herb farmer Lorri Burra considers her land an apothecary. One of her customers is a company that makes homeopathic remedies from forest plants. Photo by Eliza Laubach.

This demonstration forest garden at the Mountain Horticultural Crops Research and Extension Center in Mills River, N.C., is a learning tool for extension agents, graduate students and members of the WNC Medicinal Herb Growers Club. All work together to plant the seeds and track the health of Appalachian forest medicinal plants.


Lorri Burra, a member of the club, first planted ginseng on her land seven years ago in an old box spring frame. For two years, she saw nothing, so she stopped looking. Then last year, she saw the ginseng.

“The plants move around,” she says, “you can’t even weed.” Sure enough, a ginseng plant grows outside of the box.

Jeanine Davis, extension specialist and a teacher to Burra and many others, specializes in research and development for growing new crops, including medicinal forest plants. Many people in the forest farming field credit her as a mentor. Her most recent project involves serving as a partner on a regional, grant-funded coalition focused on providing resources, information and connection to forest farmers like Burra.

The Appalachian Beginning Forest Farmers Coalition is funded by the U.S. Department of Agriculture and consists of 14 partners: universities, nonprofit organizations, governmental agencies and a regional extension program. Members include herbal medicine processors and growers.

The most commonly tended roots like ginseng and black cohosh need five to 10 years to reach medicinal potency. Disease, poaching and competition from native and invasive plants complicate this long harvest cycle.

“It takes a certain kind of person to grow herbs,” says Davis. “It’s not easy money.” Forest farmers must be willing to take a long-term financial risk, unlike digging wild ginseng, which can sell for $500 a pound to buyers who will mark it up even higher in Hong Kong.

Over-harvesting of the prized plant, which is reputed to benefit mental stimulation and long-term health, has caused extreme fragmentation and isolation of wild ginseng populations. This plight has encouraged forest farming, yet Davis also sees ginseng hunters’ attitudes dramatically changing as more people talk about conservation. “Now people are concerned, not clearing it all out,” she says. Still, there is a big slope to climb before people stop gathering wild ginseng. 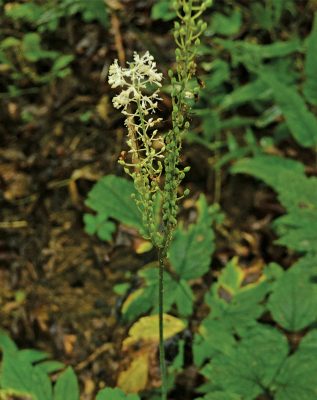 Other plants are commonly misidentified as black cohosh, left. There are 23 temperate species in black cohosh’s genus, Actaea. Photo by Eliza Laubach

Since ginseng’s fame makes farming it a delicate matter of great risk and high fences, many forest farming experts are shifting focus to growing black cohosh instead, whose root is widely used for women’s health. Actaea racemosa still crowns the understory of rich Appalachian woodland coves and is heavily dug in the fall harvest season. It has several lookalikes and is not always correctly identified when wild harvested.

Black cohosh often fetches a lower price than stinging nettle, according to Pennsylvania State University ethnobotanist and coalition partner Eric Burkhart. Even though nettle grows like a weed and black cohosh grows slow and finicky, overharvesting and a disconnect between wild harvesters and consumers lends it a low price. Burkhart does not want to see black cohosh populations become scarce like ginseng, and says this could happen within 100 years if people do not start cultivating it or better stewarding wild populations.

Greater connection between industry and academia and the current culture of wild harvesting is needed, says Burkhart, who desires to interface with root diggers in the woods. Many wild harvesters do not know their harvesting practices may be unsustainable long-term, nor that they could sell for a higher price if they were harvesting sustainably.

“If people are paid more, they will care more,” he says.

A paper Burkhart published in 2009 outlined the lack of profit in forest farming for anything but ginseng. Today he works with herbal medicine producers to strengthen their selling prices. “Most of these plants are highly undervalued in the marketplace,” he says.

Mountain Rose Herbs is changing that story. The large herbal supply company based in Oregon is buying ginseng and black cohosh from Forest Grown Certified farmers at a much higher price than the industry standard. The Forest Grown program, created by Pennsylvania Certified Organic three years ago, offers an organic certification with a new one that guarantees sustainable forest cultivation or wild harvesting standards. 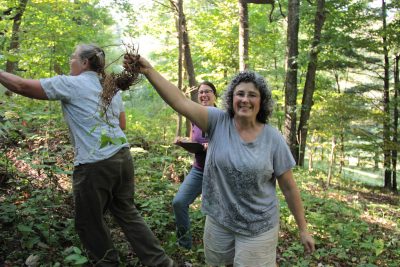 Since beginning with ginseng, 10 more plants are now on the list for possible Forest Grown verification and 11 people have become certified, with five more expected by the end of this year.

United Plant Savers, an organization based in Southeast Ohio and focused on medicinal plant conservation, helped the program sprout by covering the certification costs for the first few farmers. The fees amount to just under $1,000: $750 for an organic certification and $200 for the Forest Grown title.

The investment is a barrier to small-scale farmers like Lorri Burra, who is already certified organic with Oregon Tilth and has considered — but cannot afford — the Forest Grown Certification. Still, she plans to plant two acres of black cohosh next spring in hopes of selling to a large processor for a higher price.

Tess Weigand coordinates the Forest Grown Verification program and prioritizes the program’s accessibility in the future. According to Weigand, they need to have enough people in the program to supply the processors, like Mountain Rose, who are selling Forest Grown Verified products. To reduce costs, Forest Grown is looking for other sponsors to continue the cost-share program and also considering a model that would allow a group of farmers to apply as a cooperative. The inspector would visit certain sites each year.

Two female farmers in Grayson County, Va., piloted the Forest Grown Certified program for black cohosh last season, an effort organized by coalition partners. Katie Trozzo has worked in the community for the past three years to help build this forest farming model, which has also served as research for her doctorate in agroforestry at Virginia Tech. She says creating mutual trust among forest farmers is vital for this type of industry where product quality is of utmost importance.

Through that, she met Michelle Pridgen, who sells vegetables and preserves at a farmers market and also owns forest land. Mountain Rose Herbs bought black cohosh from Pridgen’s and another forest farmer’s wild stands last year, which were replanted with a bud from each root dug, following the Forest Grown practices. Pridgen saw an 80 percent survival rate in those black cohosh populations this spring.

Processing facilities, like Mountain Rose Herbs, must also be certified. Weigand says two more regional herb processors will become certified by the end of 2017, part of a new project organized by Appalachian Sustainable Development at a local food storage warehouse in Duffield, Va.

The freshly constructed Appalachian Harvest Herb Hub in Duffield will be used for the first time this fall by five growers processing black cohosh roots. A professional-grade central processing site for harvested herbs serves a great need for regional forest farmers, whose drying methods range widely and are often cumbersome and tedious.

Appalachian Sustainable Development, a nonprofit organization based in Southwest Virginia and an Appalachian Beginning Forest Farmers Coalition partner, collaborated with David Christie on the herb dryer design and outreach for the Duffield facility. This past year, the partnersip sought and educated farmers at presentations in East Tennessee, Southwest Virginia and Eastern Kentucky, and found funding from the Appalachian Regional Commission for the herb hub.

Christie farms herbs in Floyd, Va., and helped build a regional processing hub focused on Chinese medicinal plants in Floyd. He sees these facilities as a natural evolution as more people embrace herbs for healing. 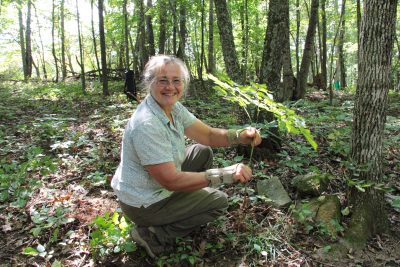 Michelle Pridgen, above, dug black cohosh last fall. This autumn, she plans to harvest it again. Photo by Priya Jaishanker.

“Why not in the coal country?” says Christie, referring to the Appalachian Harvest Herb Hub, which borders coal mining regions. “Why not where people are looking for a different form of an economy?”

A year ago Christie started a consulting business, Taproot Botanical Alliance, to link small-scale farmers to the growing national herb industry. Being a small-scale herb farmer himself unable to make living wages, his mission is “to make sure farmers can thrive in this world.”

Michelle Pridgen is curious to see how it goes for the farmers using the herb hub in Duffield. She and the other farmer she worked with lost money last season with labor taken into account. So Eric Burkhart negotiated a higher selling price with Mountain Rose Herbs for growers this year, demonstrating the commitment across the board for creating economic benefit from cultivating forest medicinal plants. Now, with the new herb hub, Pridgen is renewing her certification and selling black cohosh again this fall.

Can forest farming also build community? As Pridgen notes, the potential economic opportunity may keep the younger generation in the county. According to Trozzo, more still needs to be figured out before it is economically viable, but with the coalition, she says, “I think we have the resources to see if we can get there.”