By Carl Blankenship
Changing diets, recycling more, driving less and upgrading building efficiency are all ways to reduce one’s impact on the environment. But in 2017, while there are plenty of ways to limit that impact, it is extremely difficult for individuals to eliminate their entire environmental footprints.

That is where carbon offsets come in. Carbon offsets are programs that help eliminate the greenhouse gases from the atmosphere that are causing climate change. There are a number of types of programs that offset carbon. Some of the most effective ones have a local impact and produce other benefits.

Appalachian State University’s Office of Sustainability runs the Carbon Neutral Commuter offset program in Boone, N.C. Students and faculty who purchase parking on campus can opt into the program and pay $8 annually to offset all of their commuting emissions. These emissions make up about 20 percent of the school’s carbon footprint at about 17,000 metric tons of carbon dioxide per year.

Appalachian State runs its program through Sterling Planet, a commercial offsets provider that has operations nearby. 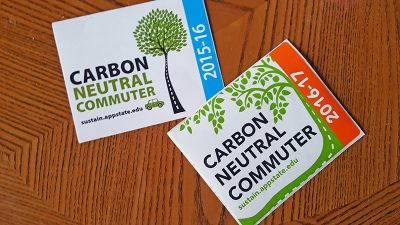 Sterling Planet has several programs, but the university opted for methane destruction. While methane is not carbon dioxide, it also has significant impact on global warming. Sterling Planet’s methane destruction program involves wicking methane off landfills and combusting the gas before it can be absorbed in the atmosphere. Methane is produced in large quantities at landfills as a byproduct of trash breaking down.

The university’s program began in 2014 and has enjoyed above-expected participation rates; 17.5 percent of commuters in 2015 and 12.5 percent in 2016 have bought into the program. Those numbers exceeded estimates from Sterling Planet by one to three percent, in spite of a lack of marketing.

“People here really have an appetite for this sort of thing,” says Jim Dees, the data and assessment specialist for the Office of Sustainability.

Commuters who buy into the program receive bumper stickers that can be stacked on top of each other, leaving the date exposed. The organizers hope that people will participate year after year and have a collection of stacked stickers, showing each year they participated in the program, on their cars that will passively boost the program’s visibility around campus.

When asked about the kind of person who was interested in contributing to the program, Dees said he believes it is good samaritans who recognize the issue of climate change and are compelled to take action and do something positive to make amends for their contributions.

Carbon Neutral Commuter was started as an independent program, but its success has encouraged Dees and Sarah Hooper, a recent graduate assistant, to prepare to expand offsetting to other university activities, such as energy purchases, landfill waste and university-sponsored air travel.

The long-term goals of emission reduction programs are to both lighten the university’s footprint and educate students so they can take what they learn into the larger world.

“If people don’t know what they’re doing, how can they lower their emissions?” Hooper says.

The greatest impact the university can have on the environment comes from educating students regarding emissions, according to Dees.

“If [Appalachian State] went carbon neutral tomorrow, or by next Thursday, it would be great, but it would be a very small impact globally,” Dees says. “But if we are cranking out students year after year after year after year for the next 25, to 30, to 40 years that understand [global warming is] death by a thousand cuts … and we need to do everything we can to avoid that, that’s where I see the impact.”

While the program failed to gain much traction in its early years due to the 2008 recession, it raised about $40,000 in the three years following its creation and finished a couple of projects with that money. It was revived in 2016 due to renewed interest in the program and a pair of grants from the Ray C. Anderson Foundation and the Kendeda Fund.

“It was a combination of enthusiasm from our board and our membership,” WNC Green Building Council Executive Director Sam Ruark-Eastes says. “Realizing that we could play an active role in supporting energy efficiency upgrades for non-profits and in schools.” 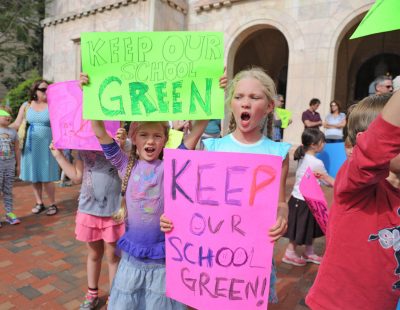 Over the long term, Isaac Dickson Elementary School stands to save $3.5 million in electricity costs through a solar array donated by Appalachian Offsets. Above, Isaac Dickson students rally for the sustainability of their school. Photo by Pat Barcas

When the project relaunched it did so with a new, sleeker website — cutmycarbon.org — with a more intuitive carbon calculator that allows users to determine their carbon footprint in a few minutes. The calculator can tell how many tons of carbon a household produces annually and how much money they need to contribute to the program to offset their total tonnage.

The program focuses on building projects that both offset carbon and benefit the community. Appalachian Offsets has contributed to programs that have eliminated nearly 3,000 metric tons of carbon emissions since its inception.

Appalachian Offsets is currently working on two Asheville-area projects: A lighting retrofit for Opportunity House, a cultural and performing arts center, and a solar array that will have long-term benefits for Isaac Dickson Elementary School.

Lighting retrofits replace older incandescent bulbs with new LED light bulbs, which are more energy efficient and have much longer lifespans. The Opportunity House project will offset over 40 metric tons of carbon emissions annually. Roughly $26,000 has been raised for the project through a combination of public crowdfunding and corporate contributions.

The effort to provide solar-powered electricity for Isaac Dickson Elementary School is much larger, with a price tag over $1 million.

Appalachian Offsets is raising $220,000 from individuals and groups, and investors are contributing $800,000. The investors will each share use of the array based on how much money they put into the project and receive tax credits for their contributions. After seven years the array will be donated to the school to serve the remainder of its 25-year lifespan, saving at least $3.5 million for the school over that time period.

WNC Green Building Council Community Engagement Director Cari Barcas says the program targets nonprofits and schools that stand to benefit most from these kinds of sustainable upgrades but are often unable to afford them.
“Our program is really designed as a bridge to bring together these companies and individuals who are looking to offset their emissions along with organizations that need support in upgrading their facilities and reducing their energy costs,” Barcas says. 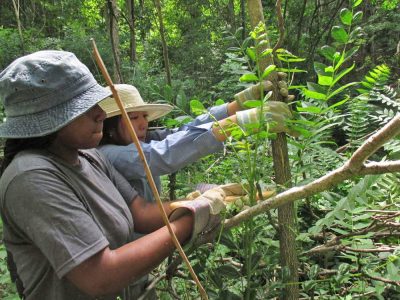 Since the program began in 2002, these trees have absorbed 474,737 metric tons of carbon dioxide, which has been certified by a third party. Program Manager Greg Meade says they expect approximately 75,000 more tons of offsets to be certified soon.

The program is doing more than offsetting emissions, it is also protecting forested areas in the Clinch River Valley of Southwest Virginia and East Tennessee. The Nature Conservancy, a national land conservation organization, manages the forest, which in turn helps maintain the health of the Clinch and Powell river systems, both part of the Tennessee River Basin.

Clinch Valley Program Director Brad Kreps says the rivers are two of the most biologically important in the country, hosting a large number of rare species.

“A big part of keeping those rivers healthy is to protect the forests that surround the river and influence all the headwater streams that feed into the river,” Kreps says. 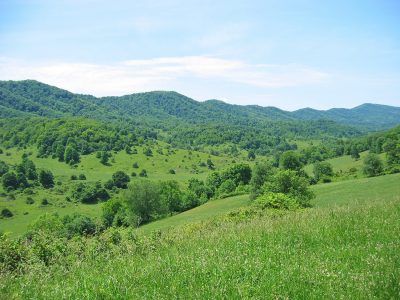 A view of Wards Cove in Tazewell, Va. Photos courtesy of The Nature Conservancy

He notes that there are over 40 species of freshwater mussels in the Clinch and Powell system, half of which are federally endangered, and more than 130 types of fish in the rivers. In total the Clinch River hosts the largest number of imperiled species in any United States river.

On top of the inherent value of species, Kreps says protecting mussels is important because they are filter feeders that help clean the waterways, benefitting other species and communities that get their drinking water from the river system.

“Mussels and the fish are kind of like indicator species as well, and it’s a test for how healthy the whole system is,” Meade says. “By getting them where they need to be, we are also helping the entire system which so many people depend on.”

Kreps says the forests and rivers also offer recreational value, which directly benefits the local economy.
The Nature Conservancy operates on private land and pays the landowners annually in exchange for rights to manage the land and timber. Funding for the project is generated through timber harvesting — done in a way that aims to be ecologically responsible — and additional funds from The Nature Conservancy.

“What we’re doing is carrying out, basically, scientifically sound silvicultural [forestry] practices,” Meade says. “Which doesn’t really sound like a big deal, but in absence of us being involved in these projects, business as usual in the Central Appalachian zone on private land is typically mismanagement of the forests.”

Like other conservation forestry programs and other carbon offset programs, these projects are capable of creating positive impacts in the areas they serve beyond reducing the greenhouse effect. Funding for these projects can produce educational benefits, save money and help preserve natural areas.