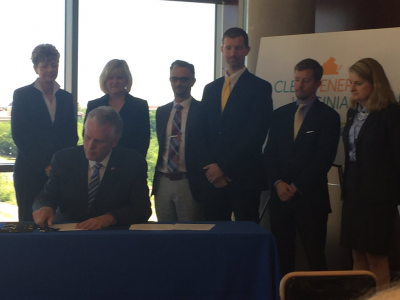 **Update (6/20/2017): The State Air Pollution Control Board is accepting public comments on the Department of Environmental Quality’s intended regulatory action to reduce carbon pollution from power plants from June 26 through July 26. Check back here to sign Appalachian Voices’ comment, or submit your own here.

With Executive Directive 11, he directed the Department of Environmental Quality (DEQ) to develop a regulation limiting carbon dioxide emissions from power plants. This was the culmination of a year-long process of study and stakeholder input following the governor’s June 2016 Executive Order 57.

“The threat of climate change is real, and we have a shared responsibility to confront it,” Gov. McAuliffe said in a statement. “Once approved, this regulation will reduce carbon dioxide emissions from the Commonwealth’s power plants and give rise to the next generation of energy jobs.”

This is a potential game-changer. As I’ve written before, Virginia’s electric utilities are in dire need of an incentive to reduce their carbon footprint. While the costs of new utility-scale wind and solar facilities are competitive with or cheaper than natural gas-fired power plants, utilities like Dominion have continued to rely heavily on gas in their long-term resource planning.

Under the Virginia Code and the new directive, the DEQ will design a regulation that places a cap on carbon emissions from the power sector, which in turn will give emission-free resources like energy efficiency, wind and solar an even greater cost advantage than they already enjoy over fossil fuel resources. When our utilities start making big investments in efficiency and renewables, Virginians can finally realize the promise of a clean energy economy: more skilled jobs; healthier air, land and water; and a safer climate.

A key piece to watch is how the DEQ will make the regulation “trading-ready.” The governor’s directive says the regulation must be compatible with multi-state carbon-trading programs. Cap-and-trade programs set a limit on carbon emissions and then allocate carbon emissions permits to power plants. If a power plant cannot meet the limit outright, it must buy more permits. Because low- and zero-carbon power facilities don’t need all of their permits, they can sell excess permits to those that need them for compliance. This creates a financial incentive for power companies to find cleaner ways to produce energy. Over time, the cap on carbon emissions is lowered, increasing the economic advantage of clean energy and energy efficiency.

The permits generate revenue that states distribute in different ways. Typically, it is the province of state legislatures to decide how revenue is raised and distributed.* So while the DEQ has clear authority to regulate greenhouse gas emissions, designing a regulation that anticipates multi-state trading while avoiding any choices on revenue distribution is the challenge.

If Governor McAuliffe is truly serious about climate action, it is also imperative that he reverse his long-standing support for the two massive pipelines proposed to ship fracked gas from West Virginia through Virginia and North Carolina (the Mountain Valley and Atlantic Coast pipelines).

Oil Change International research indicates that the combined climate impact of the two pipelines would be similar to building 46 new coal-fired power plants (see here and here). Methane, a more powerful greenhouse gas than carbon dioxide, escapes at the wellhead, compressor stations, gas storage facilities, and from pipelines themselves. Simply regulating greenhouse gas emissions from smokestacks at power plants fails to account for more than half of the emissions associated with gas-fired electricity generation. By withdrawing his public support for pipelines, the Governor has an opportunity to solidify his climate credentials.

Clearly, much work lies ahead in regulation design and implementation. But make no mistake: Governor McAuliffe’s directive is strong and timely. We challenged the governor to lead on climate as the federal government fails to act, and he has done exactly that. Now let’s ensure the carbon regulation and other energy policies from McAuliffe’s administration drive real-world greenhouse gas reductions.

*During the 2017 session, the General Assembly considered SB1471 (Locke), the Virginia Alternative Energy and Coastal Protection Act. This bill would have joined Virginia into the Regional Greenhouse Gas Initiative, a multi-state cap and trade program comprised of nine East coast states from Maryland to Maine. The bill failed to advance from committee by a single vote.