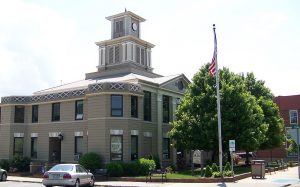 Two counties in western North Carolina — Yancey and Mitchell — are the first in the United States to pass resolutions supporting development of “on-bill financing” by their electric utility for residential energy efficiency improvements.

The counties are served by French Broad Electric Membership Corporation, which serves 34,000 people. The co-op has a successful on-bill financing program for mini-split heat pumps, but has not implemented a more comprehensive and inclusive energy efficiency financing program, despite support from community stakeholders. The resolutions, proposed by Appalachian Voices, call on French Broad to develop a program that offers upfront financing for all residents, including low-income households and renters, to make home energy improvements. According to the Pay-As-You-Save program model, the member would repay the cost on their bill over time, but the energy savings would ensure a reduction in the average monthly bill, not an increase.

The Yancey County Commission was the first to pass the resolution, on February 13.. There is both a great opportunity and a great need for energy efficiency investments in Yancey County. According to the 2010-2014 U.S. Census, 77% of the county’s occupied housing stock is more than 25 years old, accounting for more than 5,700 housing units, of which 1,280 are rental properties.

Additionally, nearly one in every six households in Yancey County live in poverty, and the area median income is nearly 20% lower than the state median income. A study conducted by Accounting Insights found that county residents living below 50% of the poverty line spent an average of 44%of their household income on energy costs in 2015.

On-bill financing for home energy efficiency upgrades has been implemented successfully by other North Carolina electric co-ops. For instance, Roanoke Electric Cooperative in northeastern North Carolina launched its Upgrade to $ave program in 2015. Based on the Pay-As-You-Save model, Upgrade to $ave is accessible to renters and to members with less-than-ideal credit scores who might not qualify for conventional financing.

The on-bill financing program supported by Yancey and Mitchell counties would help relieve the burden of energy costs and improve the quality of living for thousands of French Broad members, while also stimulating local economies. The resolutions show that local leaders in the French Broad region believe that addressing energy costs is an important part of strengthening local economies and improving the lives of local residents, and that French Broad could play a central role in achieving those goals.