Monongalia Arts Center, the historic home for arts and culture in Morgantown, W.Va., is collaborating with local artist Betsy Jaeger to show the visible changes in the rural countryside caused by the fossil fuel industry in an exhibition titled “Inside Looking Out.”

The arts center provides a forum for activism through the arts. This time, the issue is one that affects residents throughout the county: fracking and strip mining. 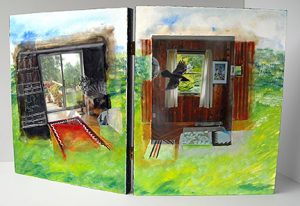 Jaeger lives in rural Monongalia County, just west of Morgantown and outside of the commotion of the small city. She moved to Morgantown from Chicago in 1976 to earn a Master of the Arts from West Virginia University. While at WVU, she met her husband, a sculptor, and the two married and moved to a serene 12-acre plot of land in the countryside.

“Many of our neighbors, then, earned their living by raising cattle to send to the big feedlots. Our little community was beautiful, and we really enjoyed the quiet and night-time darkness to see the stars and planets,” Jaeger writes. “But inevitably, all things change, and our rural idyll was no exception.”

With the advent of modern mining equipment in the mid-2000s, surface coal mining in Monongalia County quickly grew in scale, and Jaeger perceived a seismic shift in her community. She refused to sell her rural home and mineral rights to a coal company, even though some of her neighbors had begun, one by one, to agree to sell their mineral rights. According to Jaeger, some also sold their entire properties. 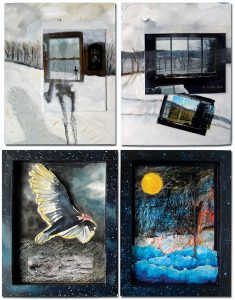 “We watched what had been a charming farm community become an industrial wasteland in just two years,” she says. “There was not enough bond money to pay for adequate reclamation.”

In 2012, strip mining began directly in front of her home, adjacent to her property line. Jaeger tracked more than 200 blasts, which rattled the foundation of her home, and she monitored the water quality in her local stream, finding high levels of heavy metals near mining outfalls.

Fracking companies and their trucks also arrived to build drilling stations. “They caused much less damage to the physical landscape than the strip mines, but the air and water quality continued to degrade,” Jaeger says. Wastewater from the fracking sites caused a massive fish-kill on a creek north of her home.

Jaeger created “Inside Looking Out” to share the drastic changes that occurred. This exhibition recreates the views outside of her 12 windows, past and present, using mixed-media elements such as sculpture, photographs and paintings. She says she hopes that this exhibition will spark local discussion and energize the community. 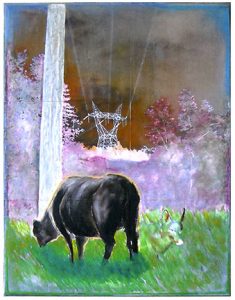 The exhibition is free and will open with a public reception on Friday, March 3, 2017, at 6 p.m. Refreshments and snacks will be available. “Inside Looking Out” will be on display until April 1. Monongalia Arts Center is located at 107 High Street, Morgantown, W.Va. Inquiries should be directed to info@monartscenter.com or 304-292-3325.

Andrew Tarley is the Media and Advertising Coordinator at Monongalia Arts Center and a former Appalachian Voices intern.