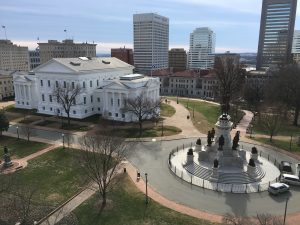 As legislation “crosses over” this week, it looks like the 2017 General Assembly session will result in incremental progress in promoting clean energy in Virginia. That said, there’s still much work to be done. Photo by Peter Anderson.

As of Wednesday this week, the House of Delegates may only work on bills already passed by the state Senate, and vice versa. Less than three weeks remain in this legislative session — a “short” session year.

Here at Appalachian Voices, we are closely tracking bills that will impact Virginia’s energy future. Will the commonwealth continue the fossil fuel-friendly policies of the past, or will we start building a clean energy economy today? Here’s a quick look:

The Virginia Coalfields Expressway (CFX) is a four-lane highway project that was proposed in the mid-1990s — in theory to promote economic development in Buchanan, Dickenson and Wise counties. However, the project would use the state’s eminent domain power to open new areas for devastating mountaintop removal mining. Over the years the CFX has stalled due to funding barriers, and this session’s HB1831 would have exempted it and U.S. 460 from the state’s prioritization process for receipt of highway funds. This bill failed in committee. However, HB2474 — which would create the Virginia Coalfields Expressway Authority, a 12-member panel that would coordinate with stakeholders to promote the development of CFX — passed the House unopposed.

In another effort to prop up the coal industry, HB2198 and companion bill SB1470 would revive the recently expired coal production and employment tax credits. A Joint Legislative and Audit Review Commission report to the governor shows that, despite hundreds of millions of dollars in credits received by coal companies under this policy since 1998, coal production and employment have declined at rates the same or faster than expected in the absence of the tax credits. Because the tax credit did not slow the loss of coal jobs, the policy did not achieve its purpose. Both bills passed their respective chambers without serious opposition. However, as in years past, the governor is expected to use his veto if the bills reach his desk.

On the clean energy side, there are several exciting developments. HB1760 and companion bill SB1418 would promote the development of pumped hydroelectric storage facilities in Virginia’s coalfield counties. In this type of system, water flowing from an upper reservoir into a lower reservoir powers a turbine during periods of high demand. The water is then pumped back uphill by another power source when demand is lower. This legislation would allow the utilities to recover the costs of building pumped storage facilities if the facilities use renewable energy as all or a portion of their power source and are located in the coalfield region.

These bills are not perfect, but they have tremendous potential. First, if a facility used predominantly wind or solar power to pump the water uphill, it would essentially operate as a renewable energy battery. There is also potential to repurpose abandoned mine shafts and pits for use in a pumped hydroelectric storage system. But the current language of the bill is so broad that it may not result in any new wind or solar generation. Additionally, utility customers are left somewhat vulnerable; they would be forced to cover the cost of the new infrastructure through increased rates (if approved by the State Corporation Commission) without necessarily realizing a comparable efficiency benefit. The House version of the bill already passed both chambers with virtually no opposition.

Three bills intended to promote solar energy in the commonwealth are also well on their way to becoming law. SB1393 would establish a three-year “community solar” pilot program in the territories of the investor-owned utilities. Under the bill’s terms, the utilities must contract with third-party solar developers to construct a minimum of 10.5 megawatts of new solar generation. The utilities would then market subscriptions to customers who want to buy solar power from these new facilities (the pilot would not raise rates for non-participating customers). This subscription-based solar program is a win for customers who want solar power but cannot afford the upfront investment to put solar on their own rooftops, or who don’t own their rooftops, or whose rooftops cannot accommodate a solar system. This bill passed the Senate unopposed.

SB1394 and companion HB2303 would offer a new “buy-all, sell-all” option for farmers looking to increase the amount of renewable energy they can generate and sell. The bill would depart from the existing net energy metering statute by allowing small agricultural generators to produce up to 150 percent of their own expected energy consumption. It would require the relevant utility or cooperative to buy all of the electricity generated by the small agricultural generator. Agricultural customers in the utility territories could continue to use the existing net metering program, but the old program would sunset elsewhere after two years. These bills passed their respective chambers.

The third solar bill, SB1395, would promote larger wind and solar farms — like the Amazon solar project that was approved in 2015 using the permit by rule process. The permit by rule process streamlines project approval by having the Department of Environmental Quality review and approve project applications rather than subjecting each project to a full State Corporation Commission hearing. This bill would raise the maximum size of wind and solar projects that qualify from 100 megawatts to 150 megawatts. This bill passed the Senate chamber with little opposition.

Finally, the cheapest energy resource — energy efficiency — has been woefully underutilized in Virginia. In 2007, the commonwealth established a goal of reducing retail electricity consumption 10 percent from 2006 levels by the year 2020. The governor’s 2016 update to the 2014 Virginia Energy Plan reported that we have accomplished only about one-quarter of this goal to date. SB990 would simply require the Department of Mines, Minerals, and Energy to report annually to the Governor’s Executive Committee on Energy Efficiency and to the General Assembly on progress made towards this goal. It is a common-sense approach; hopefully the additional transparency will help drive further deployment of efficiency measures. This bill passed the Senate with relative ease.

All told, this legislative session should be a net positive. The General Assembly looks like it will largely avoid handing big incentives to strip mining companies, and we should see incremental progress in promoting clean energy resources. That said, there’s still much work to be done as current policies continue to leave Virginia’s solar industry lagging far behind neighbors like North Carolina and Maryland. Plus, none of this is a done deal. A lot could happen over the final two weeks of the session.