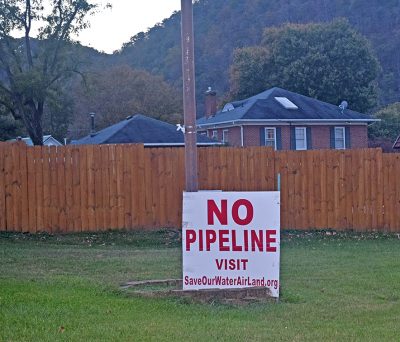 The Federal Energy Regulatory Commission (FERC) is currently taking public comments regarding the proposed Mountain Valley Pipeline, which would ship fracked gas via a 42-inch underground pipe 301 miles from northwest West Virginia into southern Virginia, with a short connector into Pennsylvania.

The public comment period gives citizens a chance to share their concerns with FERC on the record. Here are some of my concerns with the Mountain Valley Pipeline (MVP) proposal:

Existing pipelines are sufficient – Studies (here and here) show that there’s more than enough capacity on existing pipelines to carry the gas needed to meet customer demand in the Mid-Atlantic and Southeast. As many states shift their electric generation from coal and gas to wind, solar, and other renewables, it’s likely that demand for gas will decrease in the long run. But right now, bad policies are creating incentives for companies to overbuild the pipeline network.

Public safety – There is no way to justify the risk of an explosion or leak to the people who live within the quarter-mile blast radius of the proposed pipeline. The National Transportation Safety Board tracks data on pipeline incidents, and its website is riddled with reports of gas pipeline explosions and fires that have resulted in deaths and the destruction of property. Figures from the U.S. Pipeline and Hazardous Materials Safety Administration show that onshore gas pipelines installed in the 2010s have incident rates more than five times greater than pipelines installed in the 1990s and 2000s.

Water quality – The MVP’s proposed route would cross three major aquifers and come within one tenth of a mile of two public water supplies, not to mention an untold number of private drinking wells not yet identified by the project partners. The project would also cross 377 perennial waterbodies across Pennsylvania, West Virginia, and Virginia. Are we willing to risk the failure of an underground pipeline that carries 2 billion cubic feet of gas per day when headwater streams, wells, and municipal drinking water supplies are so close?

Traditional air pollutants – Three large compressor stations have been proposed to move gas along the route in West Virginia, and there may yet be a fourth sited in Virginia. FERC expects one of the West Virginia compressors to violate local air quality standards and require a permit from the West Virginia Department of Environmental Quality.

Forests & the Appalachian Trail – FERC concedes that there will be permanent adverse impacts to forests. The MVP would cross thousands of acres of prime forest land and habitat for species listed as threatened and endangered. It would cross national treasures like the Appalachian Trail and the Blue Ridge Parkway. The U.S. Forest Service has raised several of these forest impact issues, yet they have not been addressed by FERC or the project partners.

What can you do to help protect Appalachia? You can make your voice heard. You can send a comment online today; the deadline is December 22.

I’ve outlined several of my concerns above, but the list is by no means exhaustive. Whether you or a loved one would be impacted by the construction of this pipeline, or you are concerned about global climate change, this is your fight. The federal government must listen to citizen comments and address them before allowing the proposal to go forward.