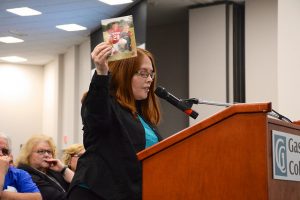 Amy Brown, a resident of Belmont, N.C., speaks during a public hearing related to the risk ranking of a Duke Energy coal ash site near her home.

In May, the N.C. Department of Environmental Quality released the final rankings for Duke’s coal ash impoundments in accordance with deadlines set by the Coal Ash Management Act.

Every impoundment in the state was classified as either “high” or “intermediate” risk, meaning the ash would have to be excavated and stored in a lined landfill. After years of attending public hearings and submitting comments to advocate for access to clean water for all North Carolinians, residents finally witnessed DEQ order Duke Energy to clean up all of the coal ash across the state.

For a moment, it appeared that the state had made progress with its coal ash policies. But in the same press release that announced the final rankings, DEQ asked to revisit them in 18 months. This would effectively give Duke time to remediate dam deficiencies and ultimately lead to a lower classification.

Six days after the department announced the rankings, the N.C. General Assembly announced the revision of Senate Bill 71, which would reinstate the Coal Ash Commission that Gov. Pat McCrory shut down in early March and extend deadlines for cleanup. McCrory vetoed the bill and, despite having enough votes to override, both the state House and Senate instead decided to drop the bill and create a new compromise bill at the end of the legislature’s 2016 short session.

The rushed introduction, concurrence and signing of House Bill 630 puts at risk many aspects of the progress that residents and environmental groups have made since the introduction of the Coal Ash Management Act in 2014. The new law requires Duke to provide clean water to residents living within half a mile of coal ash impoundments, while leaving the door open for the company to cap coal ash ponds in place.

“If they go through with putting in water lines to our community, that’s a great step in the right direction, but it’s a half a step, it’s not getting all the way there by cleaning up the ash,” said Roger Hollis, a neighbor of Duke Energy’s Cliffside plant in Cleveland County, N.C., in an ACT Against Coal Ash press release.

In exchange for providing clean water, DEQ is required to classify impoundments as “low risk” so long as dam deficiencies are addressed. This classification largely ignores the environmental risks associated with the ash’s presence and simply buries the problem instead of remediating it. As a low-risk impoundment, the law permits capping in place as a closure option, despite the proximity of the impoundment to groundwater.

The new law also pushes back the deadline for when an alternative water source is to be provided to residents near coal ash sites and for when the rankings are considered final to October and November of 2018, respectively. Alongside the deadlines, HB 630 expands DEQ’s authority to grant extensions and variances for Duke Energy’s cleanup timeline.

“They presented it in a pretty package. And the outside is, ‘you’re going to get water,’” Brown said. “They didn’t show the inside, which is dirty toxic contaminants that are going to be left in place. They passed this problem onto my children now.”

“The legislature has done what Duke Energy’s lobbyists told it to do, threw thousands of public comments in the trash can, and protected Duke Energy while sacrificing the well-being of North Carolina’s clean water and communities,” said Frank Holleman, a senior attorney at the Southern Environmental Law Center, in a written statement.

The Southern Environmental Law Center is involved with a variety of lawsuits regarding coal ash across the state. Around the time that the risk rankings were finalized and new bills were being debated, SELC lawyers released transcripts of the depositions of state employees and scientists that they conducted.

In May, SELC released the deposition of Megan Davies, state epidemiologist for the N.C. Department of Health and Human Services, which highlighted the lack of consensus surrounding the “Do Not Drink” letters that had been sent out across the state and later rescinded. In the deposition, Davies admits that she thought the letters should not have been rescinded and that no on-the-ground testing had been done to determine that residents’ well water was safe to drink.

“How dare you try to stop the public from hearing from a state employee,” said Brown. “This is a man we trust. He gained our trust when he treated us like human beings and called every person to make sure we understood what the ‘Do Not Drink’ letters meant.”

“I want to be able to say that I trust my state,” Brown said. “I want to say that the system didn’t fail us, but at this point I can’t, because they haven’t proven it.”