The importance of being earnest — about energy efficiency 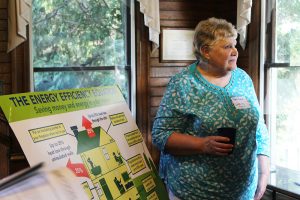 The Social, Environmental, and Economic Importance of Energy Efficiency in Appalachia

While in the Appalachian region, you may be privileged to see mountains that go on forever, float down winding rivers, feel strong winds that take your breath away, and be awed by the leaves that change from green to gold before the snowfall.

Energy waste can be seen in aging homes or homes that are lacking modern energy efficient appliances. From poor insulation to the type of light bulb used, you can see that energy inefficiency becomes expensive for low- to moderate-income households when, for instance, as much as 40% of household income goes towards paying utility bills in the wintertime as it does for many residing in Appalachia.

Energy use and costs are higher in Appalachia than the national average, so when a high proportion of family income goes towards paying the utility bill, something needs to be done in order to reduce people’s electricity bills through improved home energy efficiency. Investing in energy efficiency can also stimulate economic growth for rural communities, spur networking and relationship building between consumers and electricity providers, and support a clean energy transition while reducing our footprint on the natural resources that keep the wheels of society spinning.

Electric co-ops are helping to drive a new American energy future where consumers and utilities work together to improve and expand the services the utilities are providing to Appalachian community members. In 1914, the first electric co-op was established in Tacoma, Washington, a time when rural areas lacked access to electricity. In the 1930’s the federal government financially supported the development of electric co-ops. In turn, community members were encouraged to get involved and many electric co-ops were born, allowing energy equity for more consumers. Availability and support of such programs have been key in improving public well-being and energy savings improvements.

According to the National Rural Electric Cooperative Association, today there are more than 900 electric co-ops serving 42 million people in 47 states. Large coal, gas, and nuclear power plants are the primary energy sources used by most co-ops to provide their customers with electricity. However, more electric co-ops are adapting to a new business model by providing energy efficiency and renewable programs to their members.

One such program is on-bill energy efficiency finance, which, put simply, is a program where the electric service provider pays the upfront costs to improve your home’s energy efficiency. The improvements may include weatherization, insulation, more efficient heating and cooling systems, and potentially solar energy installations. After the upfront costs are paid by the utility, consumers begin to pay a new monthly charge to repay the utility for the efficiency investment.

In some programs, the customer keeps as much as 25% of the energy cost savings while the remaining goes to pay the utility for the financing they provided. The Energy Efficiency and Conservation Loan Program has been aiming to benefit rural areas by guaranteeing $60 million in new loans allotted to electric co-ops. The funding should become an incentive to build strong, better on-bill energy efficiency finance and community solar programs.

“Brought to scale, this program would demonstrate that what helps the environment sometimes helps the economy even more,” Zimmerman said. This economic development is spurred on multiple levels because of increased demand for energy efficiency upgrades and renewable energy installation. This results in more job creation and in more consumer dollars being spent in the local economy.

There has never been a silver bullet in addressing issues that cause environmental, social, and economic degradation. Yet, giving a voice to the people who are being impacted the most seems to be a good start. For example, when Blue Ridge Electric Membership Corp. (BRE) said it wanted to hear from members to know if they were truly interested in an energy efficiency on-bill financing program, over 1,000 members signed a letter asking for the program.

Does your electricity provider offer on-bill financing or other incentives for energy efficiency? If not, but you’d like a change or you would like to know more about our work, please contact Appalachian Voices at 828-262-1500 or email us.