Basic needs must be met to ensure successful economic transition 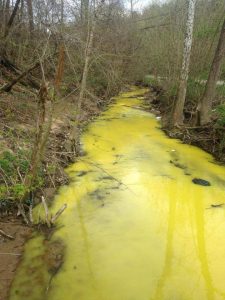 A creek in Martin County, Ky., ran bright yellow in April. The state claimed that yellow highway-marking paint was to blame. Photo via Facebook.

When Rockhouse Creek in Martin County, Ky., ran bright yellow last month, Tomahawk resident Gina Patrick said she had one major concern: that the pollution might ruin her water well.

Patrick has relied on well water her whole life and didn’t want to pay to be hooked up to the municipal water system. That’s because the Martin County Water District is one of the worst water infrastructure systems in the state in terms of water quality and water loss.

Patrick lives on Rockhouse Creek. She said that as she watched the bright yellow plume move down the creek, she took a sample of the water and put it in a paint bucket under her porch. Two curious newborn puppies on her property found the paint bucket and drank its contents. They became violently ill and died later that day.

At the end of April, the Kentucky Energy and Environment Cabinet released a report detailing the state’s investigation into the spill, but there was no mention of Patrick’s dead dogs. Although many local residents thought the pollution might have been related to fracking — an oily sheen was noticed on the surface of the water — the state claimed that yellow highway-marking paint was to blame. According to Lanny Brannock, a spokesman for the Energy and Environment Cabinet, regulators do not know if someone intentionally put paint in the creek or if it was an accident.

But many Martin County residents still have questions, and that’s not uncommon in a county that has seen its fair share of coal slurry spills and municipal water problems. The Mountain Citizen, located in the county seat of Inez, has doggedly reported water quality and environmental issues for decades. In fact, the newspaper’s diligence, combined with the hard work of local organizers, prompted the Kentucky Public Service Commission to investigate the county’s water system, which has a water loss rate of more than 60 percent and often delivers smelly, foul water.

In the aftermath of Flint, Mich., this video from Martin County caught the attention of consumer advocate and environmental activist Erin Brockovich, who posted it to her Facebook page.

When I spoke with Inez resident Josie Delong back in February, she was very clear about the long-term burdens that come with having bad water:

The biggest [burden] is definitely health issues. But also the fact that most of us are on a fixed income here. Everybody’s losing their jobs in the mines, losing their jobs here or there, and can’t afford these high water bills, and we can’t even use the water. We’re paying these bills and yet still having to go to the store and get water, and we don’t know what it’s doing to us. And that’s the big fear. We have no idea.

In 2015, the Martin County Water District accrued multiple non-compliance violations for known carcinogens such as trihalomethanes and haloacetic acids. In the offices of the Mountain Citizen, editor Gary Ball points to the back of his latest water bill, which includes a notice for anyone with an immunodeficiency disorder: do not drink the water. “In other words, if you’re as healthy as a horse, drink away,” Ball says. “But sooner or later it’s going to get to you.”

Ball and the Mountain Citizen have also extensively documented the unequal way in which water is distributed in the county, and how many customers are often not informed of boil water advisories or shut-offs in the system. According to Gary and Lisa Smith Stayton, owner and publisher of the Mountain Citizen, the excessive water loss rate often impacts the poorer or more remote areas of the county first. As water is diverted to more populated and wealthy areas in the county, some customers are forced to go without.

Sometimes there’s no water at all. As Ms. McCoy explains in this Facebook post, not having water creates all kinds of social and financial hardships on her day-to-day schedule.

Officials in the county have adamantly denied the extent of the problems, and often portray concerned citizens as alarmists and idealists. The Martin County Judge Executive, Kelly Callaham, has publicly stated that the 60 percent water loss rate in the system is due to people stealing water from fire hydrants and industrial coal mine sites. (I reached out to Mr. Callaham and the Martin County Water District; neither returned my requests for a comment).

“Our officials downplay every single issue, and go to great extents to discredit those who speak up,” says Lisa Smith Stayton. She described a recent fiscal court hearing that turned into an attempt to publicly discredit a Mountain Citizen report about disinfection byproducts in the water. Lisa was incredulous. “One magistrate even said ‘you’re more likely to get cancer from eating a hot dog.’”

In late March, due to pressure from citizens like Delong, Ball and Stayton, state Senator Ray Jones convened a meeting at his office in Frankfort to discuss issues with the water system. Watching footage of the meeting is frustrating; a great deal of time is wasted on discussing surreal and overstated accusations of “water theft.” At several points in the conversation, some variation of this statement is heard: “Martin County is not the only county where these problems occur.”

This is a familiar tactic deployed by the powerful: make the victims appear as if their demands are inherently selfish because, after all, it’s happening to everyone. If you can portray the powerless as hyperbolic and alarmist, you eventually start to convince them that their demands are crazy. This is known as “gaslighting,” and it’s a depressingly effective way to evade accountability.

But residents like Delong aren’t deterred. As she told me:

The more people who talk about it and share their concerns, the better. Because, I’ll be honest, I sat back for a long time and said, “Well why should I say anything about it? I’m just one person. That’s not gonna change anything.” And then the very second I did mention it on social media, and posted a picture, I saw a huge response. And that gave me confidence. Maybe we can change this.

Motivated by health problems that she believes to be caused by the water, as well as mounting medical bills, Delong started a public Facebook forum. She began polling her friends to see if they suffered from similar afflictions and medical costs. The results are astounding in their detail and specificity; many respondents reported skin irritations, stomach issues and autoimmune disorders.

It’s obvious from reading the comments on Delong’s poll, as well as the many comments on the Martin County Water Warriors’ Facebook page, that the public health costs of living in coalfield counties are increasingly burdensome. My own experience bears that out; I live in Letcher County, Ky., about an hour and a half south of Martin County. I spend upwards of $50 each month on bottled water, and most of my friends and neighbors do the same. With coal severance funds declining, we’re also forced to pay more for basic services like trash and recycle collections. The Letcher County Recreation Center, built with coal severance funds, is constantly at risk of closing.

In fact, Gina Patrick’s anxiety about having to switch from well water to potentially-dangerous municipal water is not uncommon. Whether it comes from a well or a municipal system, the drinking water of many eastern Kentuckians is at risk of being polluted. When a dangerous acid mine drainage spill occurred five miles upstream of the Letcher County water intake in March, we were reminded of the many times our water system was poisoned by diesel fuel from local oil magnate Don Childers. It doesn’t help knowing that the state actively works to sweep those violations under the rug, or that it neglects to include important factors like dead dogs in its investigation of a bright yellow creeks.

Delong articulates the full scope of this problem and the struggle to stay:

It just feels like we’re going downhill so fast. I’ve had a lot of friends move out of the county. And it’s sad. I grew up here. And everyone’s just leaving. And it’s becoming a ghost town. And I don’t want to leave. I mean, I could, I’m sure. But who’s going to want to buy a home in this county? How could you sell your home? When someone away from here looks up Martin County, they automatically see repeats of all these troubles and problems and people moving away and no jobs and no opportunities. It’s gonna be impossible to sell your home right now. And I don’t want to leave. I want to do what I can — I’m just one person but I want to do what I can to try and make things better for us, instead of just watching it go downhill.

Officials say that they want people to stay. Some even say that they want economic transition. But what are they doing to help us save money where it matters — on very basic needs like food, water and healthcare? The solutions to these needs amount to the most basic and essential forms of economic development: safe drinking water, functioning local services, affordable healthcare and access to adequately funded social programs. They are simple solutions to very real problems that would save people money and help them stay in the region that they love.