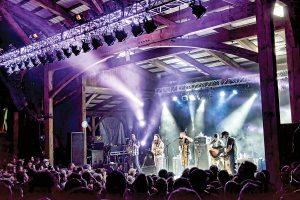 For the second year in a row, Appalachian Voices, the publisher of The Appalachian Voice, is teaming up with FloydFest to serve as the 2016 featured nonprofit and receive a portion of proceeds from the festival. The goal of the partnership is to encourage and promote stewardship of the Appalachian region, blending the joyous atmosphere of a music festival with opportunities to learn about environmental threats to the mountains and discover ways to get involved.

FloydFest is a five-day music festival held at the end of July each year just off the Blue Ridge Parkway near the picturesque town of Floyd, Va. The festival places an emphasis on family, art and celebration, and integrates non-musical offerings including outdoor activities such as disc golf and float trips, and workshops ranging from yoga to primitive tool-making. Organizers have also tapped a number of experts to lead the FloydX panel series on topics ranging from mountain music and beekeeping to mountaintop removal coal mining and other environmental issues. 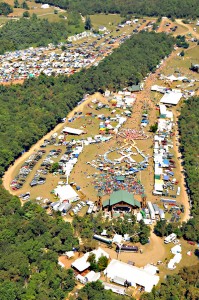 Since the festival’s inception in 2002, organizers have worked to protect the integrity of the mountain setting where it is held by incorporating a variety of green initiatives. Starting with the construction of the buildings — designed to match the hillside contours and minimize the cutting of trees — the festival’s environmental ethos has grown to include a massive Green Team recycling program that requires more than 50 volunteers and staff to run.

Nearly 74 percent of the festival’s waste is kept out of the landfill, from the vendor veggie oil that is repurposed into biodiesel to the eight tons of compost generated by biodegradable trash. The festival also offers a special ticket deal which includes an HOV-EZ parking pass to encourage carpooling.

From FloydFest’s inception, a fusion of Appalachian roots and world music has inspired the unique feel and sound of the festival. Each year, festival organizers amass an eclectic mix of more than 100 artists to perform on the festival’s nine different stages, with styles ranging from funk and Afrobeat to blues and bluegrass.

This year’s lineup features such top acts as Gregg Allman, Bruce Hornsby, Nahko & Medicine for the People, Femi Kuti and Positive Force, The Wood Brothers and more (see list at right for a complete lineup). Local and regional bands are included in the mix as well. In addition to more well-known regional favorites like Nathaniel Rateliff and Anders Osborne, a special On-The-Rise competition — held in Roanoke, Va., throughout April and May — allows up-and-coming bands to play for a spot on stage during the main festival. 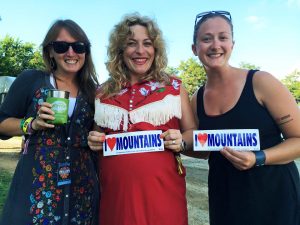 For more details about the partnership and information about how you can get 10% off Floydfest tickets, visit appvoices.org/floydfest.