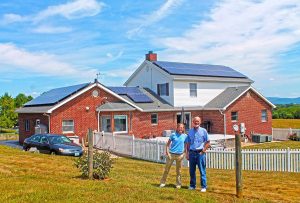 When Joy Loving decided to add solar power to her Rockingham County, Va., home in the spring of 2012, she did it the hard way. She taught herself what she could, then found an installer through a Google search. A full six months later, she turned on her system. Since then, she’s been working to make the process a lot easier — and cheaper — for others.

“My decision wasn’t driven by economics,” Loving says. “I’m 70 years old, and without state tax incentives or any kind of discount, my payback period for this system will be very long. I might live long enough to reap the economic benefits. I might not. But my primary motivation was about reducing my carbon footprint.”

When she first began looking into solar, Loving thought there might be some sort of program through her electric utility, or state policies that would help. Instead, she found obstacles. Unlike some other states, Virginia mostly forbids power purchase agreements, a solar financing model in which companies own the solar arrays they install on homes and charge homeowners for the power they use.

The state also limits the size of systems residents can build on their homes and caps the power generated by all Virginia residential arrays combined to no more than one percent of all power generated in the state. It also allows utilities to charge minimum monthly fees to solar users — even if the resident generates more power for the grid than they use. 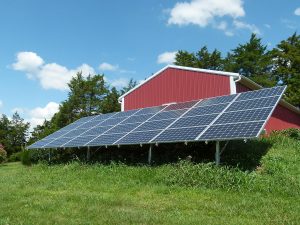 Loving says all the obstacles to solar put in place by the state and politically powerful utilities irritated her. “It got my back up,” she says. “The freedom to choose my energy source was very important to me. I believe that I need to be a good steward of God’s creation, and this is one thing I can do positively to be a good steward.”

Even after her own system was installed, Loving kept reading and learning. “There was just nothing like the thrill of not having an electric bill,” she says. “I kind of got obsessive about it, checking the system and the power meter and watching what the system could do. After six or seven months, I thought ‘this is something that other people should know about.’”

She reached out to local/regional environmental group Climate Action of the Valley in Harrisonburg, Va. Leaders there ended up connecting with Virginia Solar United Neighborhoods, also known as VA SUN, which is a branch of the Community Power Network in Washington, D.C.

VA SUN helps solar co-op groups — usually collections of neighbors — by providing the experience and expertise it takes to get organized, research installers, issue a request for proposals, evaluate and negotiate with installers, and then see the process all the way through the installation and hookups.

Ben Delman, communications manager for Community Power Network, says the various state SUN groups in Appalachia — DC SUN, VA SUN, WV SUN and MD SUN — have helped around 1,000 people go solar across the region, with about a third of those in Virginia. According to Delman, when individuals organize into co-ops, they gain expertise and save money by negotiating bulk purchases.

In addition to helping co-ops, Community Power Network has also supported groups that use the “Solarize” model, in which the installer is pre-selected rather than picked based on competitive bids.

After discussions with VA SUN, the Harrisonburg-based Climate Action of the Valley decided to sponsor a co-op in Harrisonburg and Rockbridge County. They asked Loving to lead it.

“Unfortunately, I didn’t know about co-ops when I installed [my system],” she says. “All the co-ops exploding around the state are like seeds — making people more aware and more informed about solar.”

According to Delman, the co-op experience generally works like this: “We start work with one or two local organizations — some sort of community group that can guide the process and begin recruiting co-op members.” The group holds a number of informational meetings during the recruitment phase. “We take them through understanding solar energy, the different ways to finance and help them understand the co-op process,” he says.

“In some ways, it’s the same as doing any home construction project,” Delman continues, “But how great would it be if you’re adding a deck or renovating a bathroom to be able to go through that with a group of people all doing the same thing?”

A critical mass of people interested in installing solar is necessary to move forward to the next step of actually reaching out to contractors. “Once a group gets to about 25 or 30 members, we work with them to issue a [request for proposal] to installers,” Delman says. Co-op members make the final decision. “We help group members review the bids, but it’s up to the selection committee to choose.”

Carl Droms, a member of Climate Action of the Valley, was a member of the Harrisonburg co-op’s selection committee. At that stage, there were 70 or 80 interested households, and about a dozen co-op members on the selection committee. “We all had different ideas about what was important and how to weigh the factors,” he says. “The price per watt — which included everything: panels, wiring, inverters, the electrical work, installation — was important, but there were other factors. Could the installer handle this number of installations and get things done in a reasonable time? Would they use local labor? What kind of guarantee did they offer? How much work had they done in the past?”
“In the end, we were pretty well agreed,” Droms says. “Everybody felt we made the right decision.” 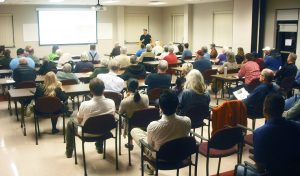 The discount for a co-op member over an individual trying to buy their own solar power system is generally around 20 percent, Delman says. “It’s a good deal for the installers, as well,” he says. “To have a base of interested customers who are educated about solar is really good.”
Once an installer is selected, individuals in the co-op get a site inspection and, eventually, a contract for a system tailored to their individual needs at the agreed-to price. Co-op members aren’t obligated to buy unless they sign that contract.

Droms is very happy with the system he and his partner installed on their home. “Our total bill for the last year has been about $130 — and that includes a $9.50 a month fee just to stay connected to the grid,” he says. “We were really pleased with the co-op. If we had to negotiate everything ourselves, it would have been a lot more complicated.”

There’s not much of a downside to working through a co-op, says Cory Chase, a Tucker County, W. Va., resident who helped organize a co-op in his area. “WV SUN offers a lot of technical assistance that really helps. It might be a little more bureaucratic and slower than going on your own, but we’ll be able to help each other out, buy material in bulk and get a competitive bid,” he says.

According to WV SUN Program Director Karan Ireland, her organization has helped co-ops launch in the towns of Morgantown and Wheeling, and in Kanawha, Tucker and Monroe counties. “A co-op is like Solar 101,” she says. “It can be cumbersome if you’re trying to figure out everything by yourself. With the co-op, you work with friends and neighbors to learn about how to go solar.”

Like Loving, Ireland believes co-ops help create solar ambassadors. “As people understand the benefits of solar, they become invested in the policy as well,” she says. “Because they’re already working together, that creates a network of solar advocates.”

And solar advocates are needed, especially in states like Virginia and West Virginia where fossil fuel interests hold so much sway, says Mark Hanson, president of the Renewable Energy and Electric Vehicle Association, a do-it-yourself club in Roanoke, Va., that helps members with solar installations and other renewable energy projects.

Joy Loving says the co-op model is serving its purpose. “It has increased awareness of solar and gotten more press coverage,” she says. “People have heard about it. People see the panels going up and they talk. Co-ops will bring more people into the solar fold.”