Blasted: Homeowners near mine seek recourse for property damage 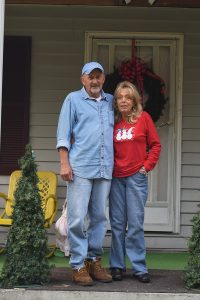 Karen and Jerry Kirk stand on the front porch of their home. Their property damage coincided with blasting at a mountaintop removal coal mine associated with the King Coal Highway. Photo by Molly Moore

Karen Kirk’s father was a carpenter. He built her childhood home from local chestnut and oak in the mid-1960s near the small town of Gilbert, W.Va., close to the confluence of Browning Fork and Horsepen Creek. Growing up, Karen and her siblings would play in the clear water and roam the nearby woods. Her home is one of several situated on a narrow strip of flat land between tall ridgelines. Mountains are everywhere: Gilbert’s town motto is “You should see the hills from here!”

In 1982, Karen and her husband Jerry inherited the tidy four-room ranch house from her aunt, adding two rooms a couple years later to accommodate three sons. When he built the addition, Jerry Kirk found that the beams were so well-seasoned that he couldn’t drive a nail through — he had to drill holes and fasten bolts to the timbers instead.

The house was in good shape, the Kirks maintain, until blasting from nearby surface coal mining started in 2007. The explosions shook and cracked the walls, knocked doors and windows out of alignment, and noticeably lowered the floor in the center of the home. Nearly 10 years later, the couple is still trying to prove that the mining company is responsible for the damages and compel the company to repair their home.

The Kirks’ story is a common one among families that live near surface coal mining. Their neighbors complained of similar problems, and other homeowners near mountaintop removal mines in Appalachia report mirrors falling from walls, chimneys separating from homes, and foundations, windows and bathtubs cracking. Some residents describe damage to their water supply such as tap water turning black or orange or wells going dry after particularly intense explosions. And although the market for Central Appalachian coal is depressed and coal production has declined sharply in recent years, residents near active mine sites still feel each blast just as powerfully as during coal’s boom years.

Blasting is an essential component of surface mining; using explosives to blow up the land and access the coal beneath is what makes this form of extraction cheaper than underground mining. Federal and state laws require mining companies to limit the size and frequency of the blasts, and — in theory — these regulations should protect nearby residences from property damage. If destruction does occur, federal law outlines a process that is supposed to lead to compensation. But as Jerry and Karen Kirk have found, it’s not that straightforward.

Like many residents of Mingo County, the Kirks are no strangers to coal. Jerry worked as an underground miner from 1988 to 1997 at Marrowbone Development Company, a mine complex that included mountaintop removal mining, and he recalls an outcry of citizen complaints related to the strip mining. He also became familiar with the destructive power of blasting while working on road construction. So when he found out that two companies were planning massive surface mines on the mountains surrounding his home, he was immediately concerned. 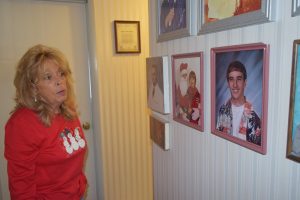 Karen Kirk points out photographs of their sons, who all live out of the area now. She says it is unlikely that they will move back to Mingo County. Photo by Molly Moore

Blasting began in 2007 at the Premium Energy mine less than a mile to the south of their home; the project was part of the King Coal Highway, a massive coal mining and highway-building project that is still incomplete. The Premium Energy blasts came roughly three or four times per week in 2007 and 2008, according to the Kirks, and continued with slightly less frequency through 2009. For a while, the Kirks also felt blasts from the Hampden Coal, LLC, mine on the ridge to the east — sometimes both on the same day. They kept a record on their calendar, marking the time and the word “blast” and writing in all-caps or adding exclamation points to denote particularly forceful explosions.

Karen was often working at the Rite-Aid during the daytime blasting, but she clearly recalls what it was like when she was home for a blast. “I would get ready to run. It was so bad and it scared me. I don’t know where I was going,” she adds with a wry chuckle, “but I was going to run.”

“When it scares the dogs, the windows rattle, you knew to expect that from an air blast,” says Jerry. “But when the house starts [going] up and down, that’s time to worry. And that’s when the drywall started [cracking].”

The federal Office of Surface Mining, Reclamation and Enforcement requires that mine operators offer what’s known as a preblasting survey to people living within a certain distance of the mine. The survey documents the interior and exterior of the structure and the property’s water quality, and the resulting report provides a baseline to judge future damage against. 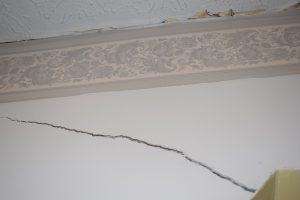 Nearly every room in the house has some sign of damage from the blasting. Photo by Molly Moore

The usefulness of these surveys often depends on when they occur and how thoroughly they are conducted. Blasting was already underway and the Kirks had already filed an official complaint with the state when the contractor arrived to do a preblasting survey of their home in 2007, but the Kirks say they never saw a copy of that report. Another firm conducted a survey in May 2008, after the Kirks’ second complaint.

Residents who are concerned that a blast has damaged their home can file an official complaint with the state agency that oversees surface mining — in this case, the West Virginia Department of Environmental Quality’s Office of Explosives and Blasting, which is obligated to send an inspector to investigate. The inspector checks the home and looks at the company’s blasting log and seismograph to determine whether the blasts complied with the law.

If the inspector determines that the property damage is a result of blasting, the state can issue a violation and fine to the company. But because any fines are paid to the state, homeowners have to seek other options for compensation. The homeowners can pursue a state-administered process, or seek compensation on their own through a civil lawsuit or an insurance claim.

Typically, however, inspectors find that the blasts were within legal limits, even when homeowners witness damages to their property that coincide with the explosions. In the Kirks’ case, the inspector who arrived in March 2008 found that the nearest seismograph “showed no evidence of excessive ground or air vibration limits.” According to the inspector, the blasts were in compliance.

Jerry recalls sitting at the kitchen table with an inspector who said “that for [the company] to be out of compliance it would have to shake a cup of coffee off this table onto the floor. I’m not talking an empty cup, I’m talking a cup of coffee.”

In other words, for a blast to exceed the legal limit, it has to be extremely forceful. These regulatory limits are based on a series of studies, particularly a 1989 U.S. Bureau of Mines study from southern Indiana. But while that study is frequently cited in the regulations, not all experts accept it as an adequate benchmark.

Dr. Sam Kiger, a now-retired Civil and Environmental Engineering professor at the University of Missouri, explained in an email that the southern Indiana homes in the 1989 study were mostly new construction and not representative of the older homes typical in Appalachia. “These more fragile homes are much more susceptible to damage from blasting-induced ground vibrations,” he wrote. “In many other countries, the experts established a much lower threshold for damage.” 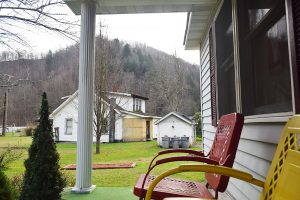 The mine is just out of sight on top of the ridge to their south. Photo by Molly Moore

In a 2010 report prepared for a court case involving blast complaints in Mingo County, W.Va., Kiger compared the blasting limits from the Indiana study to Australian standards for historical buildings, which designate a vibration level 500 times lower than the acceptable level for surface mine blasts in the United States. “Therefore, standards really represent an economic decision,” Kiger stated in the report.

Back in West Virginia, Jerry believes that the regulations should be strong enough to protect nearby structures. “It doesn’t matter if you live in a tent, nobody has the right to knock your tent down,” he says.

In West Virginia, once an inspector determines that the blast was within the standards, the homeowner can decide whether to appeal or withdraw the complaint. Sitting in the kitchen in December, sifting through documents spread across the table, the Kirks discovered a line at the end of a March 20, 2008, inspection report: “Jerry Kirk withdrew the claim on 3/20/08.” They were both silent for a moment, then shook their heads back and forth in disbelief. “My claim?” Jerry wondered out loud. “I didn’t withdraw anything.”

Even if the state finds that the offending blasts were in compliance, some residents still seek civil damages for their property destruction through the courts. In addition, homeowners can file lawsuits for damages without also filing a complaint with the state. Still, some have difficulty finding and retaining a lawyer because there often isn’t much financial incentive for the legal team.

An attorney familiar with blasting, who requested anonymity due to ongoing litigation, described a situation where coalfield residents observed a decrease in blasting problems after many households in the area reported complaints, and theorized that the mine operator modified their practices in response to the public outcry.

At the Kirks’ orderly, inviting home in Gilbert, the couple points out the persistent drywall cracks in nearly every room and the way the kitchen floor slants toward the center of the home, where the dining room floor has settled lower than the adjoining hallway.

Jerry has done some cosmetic repairs, such as caulking and repainting over cracks that stubbornly reappear, but says a much bigger job is needed to re-support the foundation and subfloor, address the windows and doors that are out of alignment and fully repair the walls.

Following a mining injury in 1995, he now has a metal plate in his neck and cycles through periods of relative wellness and severe pain. Given his health, he’s loathe to do the repairs himself, and is continuing to work with a lawyer to see whether they can compel the coal company to take responsibility for fixing the home.

Despite years of frustration, Jerry Kirk says he and Karen are sticking with the case to seek compensation and document what’s happened. “Because they’re tearing my house up — it’s my house. Our house,” he adds with a laugh and a glance at his wife.

At this point, he’s skeptical of the state, the coal companies and the legal system. But he and Karen do not intend to give up. “We’re determined to see it through,” he says.