Not On My Land

The cut-through Premier Elkhorn made on Phillip Johnson’s property is pictured above. The land to the right is the Johnson family’s land; to the left is an adjacent hollow that has been extensively mined. The cut-through is roughly 300 yards from a cabin Phillip Johnson built on his property prior to the mining in 2014. The mining, including machinery and explosives, is easily heard and felt in the cabin. Photo by Tarence Ray

For weeks Phillip Johnson lay in bed and listened to them tear up his land.

“To be honest with you, it was about the worst thing I ever experienced,” Johnson recounts. “Them ripping and tearing the rock up there with an excavator, nothing you could do about it. And the dozer running every morning till one or two o’clock, while I’m sitting here trying to sleep. It did a lot of damage to me.”

This was during the spring of 2014, after Premier Elkhorn Coal Company began mining Johnson’s land without his consent. Phillip got the mining temporarily halted with the help of his attorneys in June 2014, but not before Premier Elkhorn blew a massive cut-through on one of his ridges. The company had been using dynamite to level the ridge in order to open up Phillip’s hollow to the adjacent hollow for easier access.

“There’s not many hollers this big that ain’t been tore up,” Phillip Johnson says. “I’d say this is the only one in this area that ain’t been stripped and dozered out. All the rest of them have been tore all to pieces.” 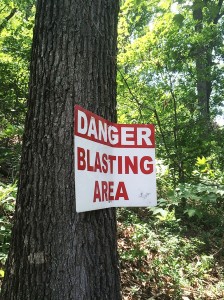 Numerous signs warning of blasting, put up by the company, are located throughout the Johnson family’s property. Photo by Tarence Ray

It’s immediately obvious how proud Phillip and his younger brother, Justin, are of this fact. They grew up here in eastern Kentucky, a family of ten that worked the land and lived off it through brutal and fertile seasons, bad times and good. The county lines of Knott, Perry and Letcher meet at the head of their hollow. “You can stand on your hands and feet and stand in three counties at one time,” the older brother says with a laugh.

Phillip eventually went to work as an underground coal miner, a job he held for 37 years. He and his father worked together for 13 of those years.

“[My father] paid for all the land with us selling livestock and shoveling coal,” Phillip says. “And my mother raised eight children. You imagine how sick it made me…to hear [Premier Elkhorn] up here working, and knowing this is stuff daddy paid for with a shovel in the mines? It was like them reaching down and sticking a thorn in your side, you know? I lost many a night’s sleep with it.”

But the brothers’ anger with Premier Elkhorn Coal Company began before mining even started. In 2013, the company sent in a land agent to convince members of his family to sell their property rights so that the company could strip and remove the surface to extract the underground coal seams. Two of their siblings sold their share of the land, but Phillip, Justin and the remaining siblings held out. To this day Phillip Johnson isn’t entirely sure how much the two siblings sold for, but he says it tore their family apart.

The image of the hollow adjacent to the Johnson family’s land was taken from the cut-through on Phillip Johnson’s ridge. Photo by Tarence Ray

“We were a close family. We went to Miami Beach, we’d go to the Smokies and camp out. I mean, we were one big, lovable family before,” he says. “Then [Premier Elkhorn] started putting into this, and it’s tore the family all apart. It really tears you up to think that some company with their money and power can come in and do you that way.”

Exactly how Premier Elkhorn managed to do this against the remaining siblings’ objections, and whether the state of Kentucky should allow it to continue, is the subject of an intense argument among lawyers, policy-makers and landowners.

Phillip Johnson and his siblings are legally represented by Mary Cromer of the Appalachian Citizens’ Law Center in Whitesburg, Ky., Joe Childers of Lexington, Ky., and Walt Morris in Charlottesville, Va. According to them, the case is reminiscent of how coal companies used to use the broadform deed — a legal mechanism that severed underground mineral rights from surface rights — to legally justify strip mining a landowner’s property. These deeds were often written to grant the owner of the minerals the right to extract coal over the objection of the surface landowner. Companies bought up many of these deeds during the first half of the 20th century, at a time when surface mining was virtually unheard of. 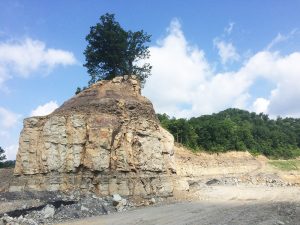 What remains of the ridge after Premier Elkhorn used explosives to gain access to the Johnson family’s property. Photo by Tarence Ray

It wasn’t until the 1950s that surface mining as a method of coal extraction really took off. “The mineral owner had the complete dominance of the surface owner and could do whatever they needed to get at the coal,” Cromer explains. “So that’s when you had coal companies stripping away and running people off their land to get to their minerals.”

The Kentucky Supreme Court ruled this practice unconstitutional in 1987, but miles and miles of the state’s mountains had already been removed.

According to Cromer, after the 1987 ruling the state and the coal industry began looking for new ways to strip mine privately owned property. “For years they didn’t need consent because most everyone had unknowingly sold out their minerals a long time ago,” she explains. “So when the broadform deed was no longer able to be used they went to this system where they only needed consent from one owner.”

In Phillip and Justin’s case, their father left the property for the family to own jointly. Phillip, Justin and three of their siblings jointly own a 62.5 percent interest in the land. Premier Elkhorn, through Pike-Letcher Land Co., now controls a 25 percent ownership interest in the land, after their two other siblings sold their individual rights.

The state of Kentucky has interpreted federal surface mining law to mean that a coal company only needs to obtain a lease from one person that owns an interest, no matter how small that interest, in order to strip away that land — even if the rest of the owners object. “It’s this loophole that allows them to get around the broadform deed reformation,” says Cromer.

In the summer of 2014, Cromer, Childers and Morris won a temporary halt on the mining on the Johnson property. U.S. District Judge Amul R. Thapar subsequently ruled that the Surface Mine Control and Reclamation Act, the first federal law to regulate surface mining in individual states passed in 1977, says that a coal company has to get consent from all surface owners in order to mine.

Despite the judge’s ruling, the state of Kentucky reissued the permit on the Johnsons’ land in September 2014 under a subsection of the Surface Mine Control and Reclamation Act that defers to state property laws. “Kentucky has continued to permit under a different part of [SMCRA], and is still continuing to permit based on the consent of just one surface owner, even if the other surface owners object,” says Cromer. 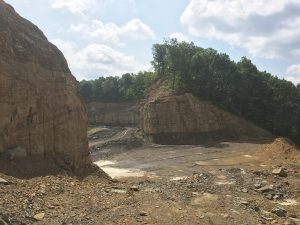 The view of the ridge from the Johnson property is pictured at center. Photo by Tarence Ray

When asked about this practice, the Kentucky Energy and Environment Cabinet responded, “The cabinet is in compliance with all court orders and is addressing all of these issues in state and federal administrative actions.”

The cabinet declined to respond to further questions regarding their legal justification and the fact that they continue to issue permits under a different subsection of federal surface mine law despite Judge Thapar’s ruling. Premier Elkhorn could not be reached for comment.

Despite the reissued permit, it’s unlikely that Premier Elkhorn will continue mining Phillip Johnson’s land any time soon. Late last year, parent company TECO sold Premier Elkhorn to Cambrian Coal for virtually nothing, and the price of coal has dipped so low that, according to data from the U.S. Energy Information Administration, not a single mine in central Appalachia is presently operating at a profit. In the meantime, Cromer and Childers have filed a new action against Secretary of the Interior Sally Jewell and the U.S. Department of Interior on behalf of the Johnsons, so that a federal court can review the state agency’s decision to reissue the permit.

For Justin Johnson, the problem is historical. “I question the fairness and how people in eastern Kentucky have been treated for so many years,” he says. “And these coal companies, where are all these coal companies at now? Are they still here taking care of the people? They’re gone. The money’s gone, so they’re gone.”

Yet the uncertainty of the future is also hard on the brothers. “If coal sales get good they might fight harder for it,” Phillip Johnson says. “If it doesn’t, they might leave it alone. You know, I’d like to see coal sales’ price pick up, but I hope they don’t ever take this from me.”

For more, listen to a radio episode that explores Phillip Johnson’s story from WMMT’s Mountain News and World Report. Additional reporting for this article was done by Parker Hobson of Appalshop/WMMT-FM.