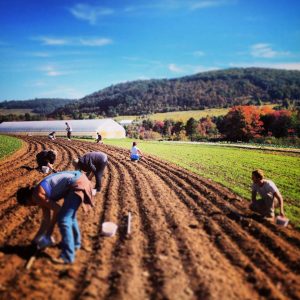 Round Right Farm is now a successful family enterprise. But while the Vortigerns are glad they retain their mineral rights, they worry that there might one day be fracking on neighboring land. Photos courtesy Round Right Farm

This year will be Steve Vortigern and his wife Sunshine’s tenth year of farming in Preston County, W.Va. On 41 acres, they grow more than 40 different varieties of organic vegetables and raise grass-fed beef for local customers at Round Right Farm.

In the beginning, the Vortigerns were unsure how long they would be able to continue farming. “At that time on our farm, we weren’t really sure how realistic the overall success of our farm was going to be,” he says. The Vortigerns faced many of the same challenges that other beginning farmers face, such as knowing what to grow and how to sell their produce. “It wasn’t until our fourth, fifth, sixth year of farming that we figured a few things out, and we began to see the light at the end of the tunnel,” Steve Vortigern says.

During those first years, they also faced the prospect of natural gas companies constructing hydraulic fracking wells on their neighbors’ properties. Just when they were questioning whether farming would be a viable long-term occupation or not, a group of Preston County landowners formed together to offer their mineral rights to a prospective natural gas company, “hoping to get a better price per acre because they were able to offer several thousand acres instead of forty or one hundred acres,” he says. 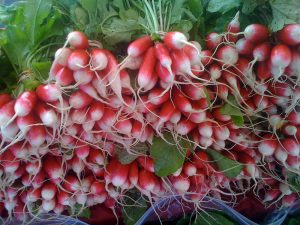 Property ownership in the United States is often described as a bundle of rights. The owner can sell one right, like the right to minerals under the surface, to someone else while still retaining the rights to the surface of the land. When property rights are severed liked this, the property becomes known as a split estate.

“We were very much against the whole idea,” Vortigern says, “However, we were also really afraid that a lot of our neighbors or neighboring farms had already severed their mineral rights.” If hydraulic fracking occurred near their property, he says, it would devastate their way of life. “The land would be devalued. The water would be ruined.”

But at the time, with the future viability of their farm unknown, the couple felt compelled to join their neighbors and recover what they had spent on the land. Luckily, the natural gas company was only interested in land in the western part of Preston County and not the Vortigerns’ farm. In the years since, Steve Vortigern says their farm revenues have outweighed what the natural gas company offered the other landowners in his area. “However, we are still really worried that there will be fracking wells on our neighbors’ properties,” he says.

These estimates hint at the complexity of split estate ownerships in West Virginia. To understand exactly how much land has been severed from the mineral rights beneath would require examining property records at county courthouses. For a surface owner to locate the original deed where the split estate occurred often takes a great deal of time, and experts with SORO and other groups advise hiring an experienced property attorney. 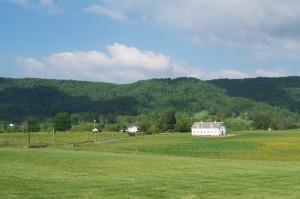 In West Virginia, severing estates occurred at different points in time, as different minerals like coal, oil and now shale gas became profitable. The coal and oil booms at the end of the 19th century saw a huge spike in the splitting of mineral estates, long before hydraulic fracturing was taking place in the Marcellus shale. According to Dr. Alan Collins of West Virginia University’s Division of Resource Management, landowners may have thought that there was little risk of their property being developed for its mineral resources, and therefore may have been more interested in selling their mineral rights.

“Buying land 15 to 20 years ago, you wouldn’t have thought technology would change to allow us to exploit different resources, like Marcellus Shale and Utica Shale,” Collins says. “[New] technology changed people’s expectations about the surface land and how it can be used.”

It is difficult for farming and horizontal gas drilling, or fracking, to coexist in close proximity. The impacts of drilling are severe and the remedies for surface owners or landowners near wells are limited and expensive in West Virginia. Some landowners lease their property to natural gas companies and receive compensation. Others are bound by split estates or activities that occur on their neighbors’ properties. 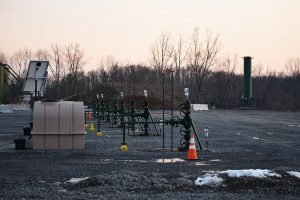 A wellpad site on a split estate in Doddridge County, W.Va., was built by the drilling company to access the minerals beneath the surface owner’s land. Photo by Molly Moore

According to Julie Archer of the Surface Owners’ Rights Organization, when natural gas companies establish wells, “They often need a lot of land and preferably a place that’s flat.” Some shale gas well sites are 15 to 20 acres and industrial equipment stays on the site after the actual drilling is complete. “They can end up taking the best parts of people’s land, the best pastures or hay meadows,” Archer says.

For a farmer to not know whether their property or a neighbor’s property is a split estate makes it difficult to obtain credit or make investments in farm infrastructure. The incentives to continue farming or begin to farm in this unstable property environment disappear, according to Bradley Wilson of West Virginia University’s Food Justice Lab. “It’s an issue around who owns what resource,” Wilson says. “Gas and coal versus the resource of soil for food production. Can those two things coexist without there being an undermining? Gas and coal can create some real uncertainty about the viability of a local food economy.” 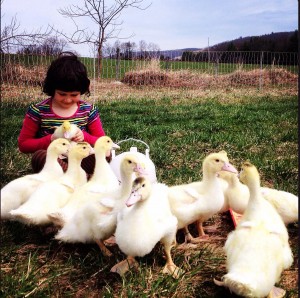 West Virginia SORO, West Virginia University College of Law, and several farmers’ organizations are collaborating with West Virginia Food & Farm Coalition to create a primer for farmers on split estates. Their guide will address concerns about damaged crops, loss of water quality, difficulty obtaining organic certification, or an inability to place property in a conservation easement due to drilling.

“I think that the biggest issue for farming in our state is access to land and mineral severance,” says Liz Spellman of West Virginia Food & Farm Coalition. “With this primer and work, we want to bring in a bipartisan farmer constituency that will show that there’s a huge voice interested in knowing how property ownership works and how split estates can disenfranchise farmers.”

Focus on the Farm

For Steve Vortigern, education for farmers and consumers is essential to the growth of West Virginia’s local food system. “Over the past ten years, we’ve realized that there aren’t a lot of farms in our area that are financially successful,” Vortigern says. “I think the general perception that there’s no money in farming isn’t true. We’ve proven that it can be a viable occupation.” 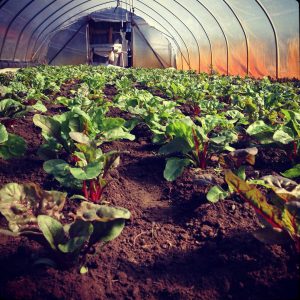 The expanding local food movement has led to a renewed interest in stewardship for the land in a way that rebuilds the soil and provides healthy livelihoods. Because of this, as communities work with the legislature to foster a vibrant local food system, farmers in Appalachia are beginning to speak more and more about split estates.

“I think farmers are very concerned about their land,” Bradley Wilson with WVU’s Food Justice Lab says. “They love the land. They want to feel secure on their land. We have to take who controls property and land very seriously.”

“Severed mineral rights can undermine the concept of growing local food and undermine sustainable development in West Virginia,” Wilson says. “If you want to retain folks and promote new farmers, you have to promote land. You have to be honest about the barriers to farming in Appalachia and West Virginia.”

“I’ve come to realize that despite how common and prevalent mineral severance is in West Virginia, many landowners do not know much about it.” says Peck. “From a lawyer’s perspective, it is startling.”

Would it be possible to buy back mineral rights?

Yes, but it is not common, Peck says. First, a surface owner would need to hire an attorney to discover who owns the mineral estate, which can be expensive. This effort can be frustrated by the further splitting of mineral estates between different corporate entities or between specific minerals. Once an individual determines the mineral estate’s ownership structure, buying back the rights may cost more than some landowners could afford. “I think the corporate entities are probably holding those rights as an investment and may not be interested in selling them back,” says Peck.

Could a surface owner seek compensation from the mineral owner?

In addition to pursuing damages for nuisance or negligence, two state laws allow West Virginia surface owners to seek compensation from companies after drilling operations have ceased. The laws, however, have specific limits, such as only awarding compensation toward lost income, market value of lost crops and lost value of used surface land. The law does not cover the surface owner’s future plans for the site.

Where can surface owners go from here?

“The biggest complaint that we have heard is that the landowner didn’t have any say,” says Julie Archer of West Virginia Surface Owners’ Rights Organization. “One of the things that SORO has advocated for is that individuals should actually know what they’re buying.”

“When SORO first formed, one of the of the things that we pushed for was a Surface Owner’s Bill of Rights, modeled on landowner protection legislation that were passed in Colorado and New Mexico,” Archer says. This proposed legislation would empower surface owners by implementing requirements such as earlier notice of planned drilling activities, a face-to-face meeting between the landowner and mineral owner, an opportunity for pre-drilling mediation, and improved compensation that also reflects the reduced value of land near the drilling activities.

According to Archer, the retroactive nature of West Virginia’s surface owner compensation laws is a “shortcoming,” and noted that a Surface Owner’s Bill of Rights “is primarily designed to give landowners more say before the drilling occurs.”

“The best thing that people can do now is keep a journal and take pictures. You have to have documentation of before, during, and after to have a good case [for compensation].”