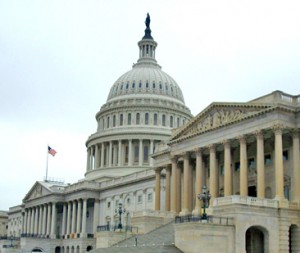 In the spending bill, Congress steered clear of the Stream Protection Rule and increased the budgets of agencies focused on economic development in areas including Central Appalachia.

Look for a deeper analysis on the budget deal from us next week.

Today the U.S. Congress passed a spending bill that covers all federal government expenditures and sets the budgets of agencies such as the U.S. Environmental Protection Agency, Department of the Interior, Department of Labor, and the Appalachian Regional Commission.

The spending bill is a big deal for Appalachian Voices. And honestly, it looks pretty darn good.

Until President Obama signs the bill, which he said he will do, the details aren’t final. But negotiations between the White House and congressional leaders from both parties have been going on for months, including several straight all-nighters this past week. The horse trading has already happened. So while we can’t be certain that everything in the current draft bill will remain, I’d be shocked to see changes.

Appalachian Voices has been working for years to get a strong Stream Protection Rule. The Office of Surface Mining Reclamation and Enforcement (OSMRE) released a draft version of the Stream Protection Rule earlier this year, and while it’s in need of improvements, the rule is still expected to improve safeguards for streams near mountaintop removal mines in Appalachia.

Naturally, the coal industry and its backers in Congress have fought against the rule. They argue that protecting our streams from coal’s toxic waste will cost more than 100,000 jobs. While that’s absurd, it is true that forcing mining companies to stop haphazardly dumping all of their junk into streams, and instead coming up with plans to repair damage, will cost them money. So the industry has been begging its congressional advocates to block the rule from being finalized.

But the bill does not include a rider preventing OSMRE from completing the Stream Protection Rule, despite a large group of representatives pushing for one. We are relieved, to say the least.

On the positive side, there are elements of the POWER+ Plan in the budget. The Department of Labor will receive an additional $19 million in 2016 to aid displaced coal mine workers, which is a bigger problem in Central Appalachia than anywhere else. The Appalachian Regional Commission got a huge boost to its budget, from less than $90 million all the way up to $146 million. The agency has recently been concentrating its funding more towards economic development in the coalfield areas of Appalachia. We expect that trend to continue considering its exciting and unexpected 62 percent boost in funds.

Most surprisingly, the bill includes $90 million for abandoned mine cleanup in Kentucky, West Virginia and Pennsylvania. The money is designed to be a pilot program that can later be applied to other states, and we can’t wait to see it expand to Virginia and Tennessee. The interesting part about the funding is that it’s not just about patching up abandoned mine sites, but also focuses on our region’s transition away from a coal-based economy. The purpose of the money is to create jobs and support projects that will aid business development in areas hit hardest by coal’s decline. We have been working hard to see these sorts of projects happen, and while this short-term funding is definitely not enough, we’re excited about the new direction.

So the federal budget is settled. The government won’t close down. Our federal agencies can continue their work to protect Appalachia from mining waste. And our region just got tens of millions of dollars tossed its way for economic development.