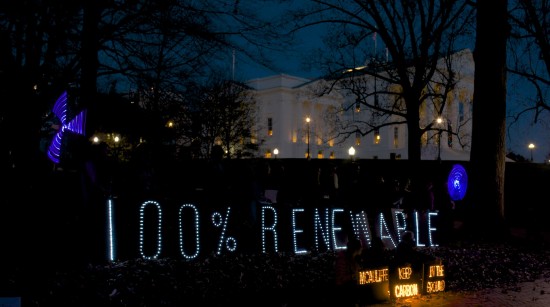 Ahead of the 2016 General Assembly session, Virginians gathered in Richmond to call for greater commitments by their leaders to address climate change and advance renewable energy.

Around this time of year, we usually offer a Virginia legislative preview, looking ahead at the issues that will arise in the upcoming session of the General Assembly. Recent events relate to some of those possible policy changes, thickening the plot and making this session one worth watching and engaging in — especially for customers of Appalachian Power Company.

With the McAuliffe administration in the lead, Virginia is now drafting a plan to comply with its carbon pollution reduction target as set by the federal Clean Power Plan. Many central elements of the state plan remain in question, including whether reductions will be based on the rate of carbon dioxide emissions per unit of energy generated, or on the total mass of emissions, as well as whether Virginia will trade emissions with other states.

On Tuesday in Richmond, an open meeting of an official group of Clean Power Plan stakeholders was held in the Department of Environmental Quality office. While public comment is not taken in these meetings, they are a key opportunity to follow the process and let decision-makers know how important their work is to you, so stay tuned for future meetings.

Even as these policy experts, advocates, and business and utility representatives invest time and energy into constructively discussing Virginia’s carbon-reduction plan, there are those who are focused on stymieing this effort. Recently proposed legislation would require General Assembly approval of our state Clean Power Plan. The bill (HB2) would hold up our progress and could result in the federal government telling Virginia how to meet its carbon-reduction targets, removing the flexibility that many parties believe makes these emissions reductions economically doable.

As the players at the table shape state plans, it is resulting in some interesting shifts in political activity.

American Electric Power, the parent company of Virginia’s second-largest utility, Appalachian Power Company, announced last week that it is ending its relationship with the American Legislative Exchange Council, or ALEC. A widely known climate denial front organization, ALEC currently has half a dozen pieces of model legislation opposing the Clean Power Plan that it’s pushing in state legislatures. By way of explaining its termination of membership, an AEP spokesperson said the company is reallocating resources as it focuses on working with states around the Clean Power Plan.

AEP says it supports the federal plan and renewable energy, and has “long been involved in the reduction of greenhouse gases.” Still, reporters pointed out the company’s significant reliance on coal in its generation mix, although projections show its coal use declining in the near future.

So what is subsidiary Appalachian Power (APCo) planning to do to meet demand with clean energy in its Virginia service area?

APCo customers that read this blog will be aware that we have followed the company’s release of its latest long-term plan for meeting demand in its service area, and that media have reported on some important ways this plan is distinguished from what we have seen the utility propose in the past.

APCo proposes 510 megawatts of solar and land-based wind development in the coming years. Oddly, the predicted growth in its customers’ self-generated energy from solar arrays is low. APCo offers no assessment of the overall costs and benefits of rooftop solar, nor steps to encourage residents and businesses to go solar.

Prompted to comment, an APCo representative made the interesting point that managing demand by offering customers ways to save energy and reduce their bills is an approach that may cost less than developing energy generation. That sentiment may ring a bell for regular readers of this blog: it’s an argument that Appalachian Voices has been stressing for years. Now we’ll be holding onto that nugget of brilliance and keeping the utility on track to live up to those words.

In September, the State Corporation Commission considered a case about APCo’s proposed program for customers looking to go solar. Schools, churches, nonprofits and other non-residential entities were the most affected by the program, which would provide one way for a customer contract for solar power with a system installed and owned by a third party. Such customers in Dominion Virginia Power’s territory can go solar with no upfront costs, thanks to innovative financing for this type of arrangement.

But under APCo’s program, the utility would act as middleman, paying back lower-than-usual credits to the customer and charging higher-than-normal fees. It all adds up to an uneconomic deal that’s likely to deter use of this option and diminish the ability of customers to realize their energy goals and environmental preferences, while slowing job growth in Virginia’s solar industry.

Businesses and concerned customers are now coming together behind legislation that would remove many of the hurdles that are currently hampering solar development in Virginia. Watch for updates on this bill.

A bill to join Virginia into the Regional Greenhouse Gas Initiative (RGGI) is again being introduced, with important differences from last year’s version. Notably, through the auction of emissions allowances, the wVirginia Coastal Protection Actwould raise approximately $250 million in the first year of Virginia’s membership, more than $20 million of which would be allocated for economic development in southwest Virginia.

Show your support for this measure and stay tuned for more ways to educate yourself and your legislators about legislative solutions and threats as the General Assembly 2016 approaches.