Countering Stereotypes in the Classroom and on the Parkway 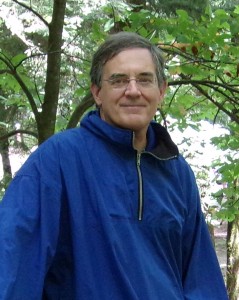 Peter Givens has made a career out of dispelling Appalachian myths and stereotypes, first as a ranger for the National Park Service and now as a faculty member in Virginia Western Community College’s history department.

The driver behind it all? A deep and abiding love for the region.

“We live in such an incredibly special place in the world,” says Givens. “You can take any aspect of what Appalachia is — whether it’s the natural history, the biodiversity, the recreational value that’s just inherent in the mountains and what I think is a very, very deep and rich culture — and it just hurts me when it’s not treated right.”

According to Givens, the Park Service, where he started in 1977, was sometimes guilty of perpetuating Appalachian stereotypes at its facilities.
“In the 1930s, when the Blue Ridge Parkway was built and the signs were put up and they were deciding what to interpret and what not to, you can tell they thought, ‘Let’s make it quaint; let’s make it what people expect to see,’” Givens says. “You know, let’s tear down the two-story white frame farmhouse and find a log cabin somewhere and put it there instead. They were creating what they felt like the public wanted to see.”

Givens, who worked on a number of visitor centers and exhibits during his 35 years with the Park Service, tried to rectify as much of that as he could.

“In the facilities that I worked on and some of the wayside exhibits, we just feel like we were telling a much truer, richer, honest sort of story than maybe the parkway did in the beginning,” he says.

Though Appalachia is featured in films dating back to the late ’30s, Givens says the real explosion of cultural attention occurred after the 1960 presidential election. It was the first presidential campaign that America really watched on television and John F. Kennedy focused an incredible amount of attention on the region.

“You can make a case that many Americans sat in their homes during that campaign and saw Appalachia for the first time, on television,” he says. “And they were interested, intrigued, enamored — even horrified, maybe — by what they saw on their television screens.”

That new interest was reflected in a slew of new television shows — Beverly Hillbillies, Petticoat Junction, Green Acres, Hee Haw — that all consisted of one-sided portrayals of Appalachia. That went on for 10 or 15 years, or longer, Givens says.

“Dukes of Hazard is right out of Li’l Abner,” he says. “You can take Daisy Mae from Li’l Abner and you can put Ellie Mae Clampett from the Beverly Hillbillies or Daisy Duke in there and not tell the difference. It’s the same sort of image.”

Images that lack a broader perspective still predominate — even within Appalachia. Givens points to a mural set in the sidewalk around the renovated Market Square Building in Roanoke, Va., which depicts a young, barefoot banjo player in threadbare clothing sitting with a hound dog.

“The depiction of Appalachia in popular culture is getting better and better,” he says. “But we’re not there yet. We still see lots of stereotypes.”

In his classes on Appalachian history, Givens tries to ensure that his students understand the complexity of the story and help them understand that many Appalachian stereotypes really depict rural life across America, not just in this region.

“There is a preponderance of iconic images that America associates with Appalachia that really are just rural things,” he says. “I tell my students that people in Kansas made quilts and played banjos and lived in log cabins.”
Appalachia isn’t a static entity, either, Givens stresses. “Appalachia is changing, and it has always been changing,” he says.

But one thing does seem constant: The deep sense of place developed by those raised here. “There seems to be something very precious and personal for people who’ve grown up in this region that they just don’t want to let go of,” he says. “There are so many stories of people who have left the region for big cities and factory jobs and they just keep coming back, and they won’t let go of the homeplace.”

That sense of place seems to really motivate Givens. “I just want people to know, in whatever sphere of influence I have, how special this place is.”