Changes for Blue Ridge Parkway in 2018

The Blue Ridge Parkway is 469 miles long and reaches from Shenandoah National Park in Virginia to the Great Smoky Mountains National Park in North Carolina. Each year, the National Park Service identifies projects for the upcoming season. Included below are some of the projects occurring in 2018. 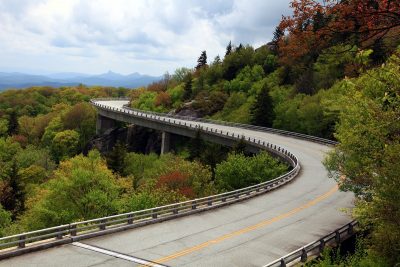 The Linn Cove Viaduct on the Blue Ridge Parkway is considered an engineering marvel. Photo by National Park Service

The Linn Cove Viaduct on the Blue Ridge Parkway will be closed for maintenance from March 1 through May 24.

Gates will be located at Milepost 303.6, Wilson Creek Overlook, and Milepost 305.1, at an access point with U.S. 221. Within this area, the parkway will be closed to all uses — including the section of Tanawha Trail that runs underneath the bridge.

During the closure, crews will repave, repair and waterproof the bridge and its structure. The work should be done in time for Memorial Day weekend.

The viaduct, which wraps around Grandfather Mountain, is deemed a peak of parkway engineering and environmental protection because it was constructed from the top down to minimize disturbance to the natural ecology.

Completed in the mid-1980s, the viaduct signaled the completion of the Blue Ridge Parkway.

For decades, Blue Ridge Parkway visitors could stop at Milepost 241.1 for a meal and a view at Bluffs Restaurant. This year, the National Park Service Staff will be taking ideas for the revitalization of the popular Doughton Park facility. Interested parties are encouraged to submit their request by May 4. The facility requires significant and costly repair — including mold removal.

The property, opened in 1949 and located near Laurel Springs, N.C., is a source of nostalgia for many, according to the Blue Ridge Parkway Foundation. The restaurant closed in 2010 when the Arizona-based management company decided not to renew its contract with the National Park Service.

In June 2017, the Doughton Park Visitor Center and Park Store was reopened.

Careful planning is underway regarding over 5,300 acres around Waterrock Knob in Western North Carolina at Milepost 451.2. The Blue Ridge Parkway acquired the land in the summer of 2016. In planning for the largest expansion of the park unit in 60 years, National Park Service staff aims to protect the ecosystem while providing opportunities for visitors.

In late January, a public meeting in Waynesville allowed community members to express what they would like to see for the park unit — such as hiking trails or a wildlife habitat. The meeting aimed to create a community vision and gauge the public’s interest.

In December, the National Park Service approved construction of the heavily contested Atlantic Coast Pipeline under the Blue Ridge Parkway’s milepost 13 in Central Virginia. On March 6, crews began tree-cutting on the property

This approval comes after more than three years of study. The crossing was found to be “consistent with the long-term conservation of scenery, wildlife and cultural resources under the agency’s care,” Dominion Energy spokesman Aaron Ruby said in an interview with the Robesonian.

The technique to install the pipeline under the parkway is horizontal directional drilling, which minimizes surface impact, according to Ruby.

Following this decision, on Jan. 19, the Southern Environmental Law Center and The Virginia Wilderness Committee filed a legal challenge against the National Park Service, stating that the pipeline would have long-term impacts on the parkway’s viewshed.

In June, Blue Ridge Parkway managers introduced the Pavement Preservation Program in Virginia, which is designed to extend the life of pavement. This year, the program will be implemented on parkway sections in North Carolina and continued in Virginia. Roads will remain open during construction.

The preservation technique uses chipseal, a pavement surface treatment that minimizes loose gravel and accumulation. This can take up to two days to cure. This technique has been successfully incorporated in Yellowstone National Park, which encounters high traffic.

Several studies done on national parks that have implemented this technique have found that each dollar spent on pavement preservation can save between $6-$10 in future pavement repairs.

The National Park Service staff prepared Flat Top Manor at Moses H. Cone Memorial Park, Milepost 294, for opening day on March 30. The historic house requires consistent upkeep and cleaning, but is well worth the effort according to the Blue Ridge Parkway Foundation.

In the past year, construction has focused on repairing the railings and roof of the house. This project is part of a Blue Ridge Parkway Foundation plan to repair and rehabilitate the historical estate.

Flat Top Manor was the summer home of textile mill owner Moses and his wife, Bertha Lindau Cone. Moses Cone began building his estate in the late 1890s, including the apple orchards, carriage roads and lakes.

When Bertha died in 1947, the estate was passed on to the Cone Memorial Hospital, which donated it to the Blue Ridge Parkway in 1950.

On January 24, the National Park Service named the new Blue Ridge Parkway superintendent, one of the most high-profile positions in the country’s national parks.

J.D. Lee took on this role on Feb. 18. He has served as the acting superintendent since Oct. 1, after the former superintendent, Matt Woods, retired.

“The leader of the parkway is an especially important role, considering the number of visitors and the economic power it wields across local communities,” said Anne Whisnant, a parkway historian who lives in Chapel Hill, in an interview with Citizen-Times.

Lee has worked with the National Park Service for 30 years, starting as a seasonal park ranger. For the past eight years, he was the deputy superintendent of Florida’s Big Cypress National Preserve.

He and his wife have relocated to Asheville, N.C, where the headquarters of the Blue Ridge Parkway is located.