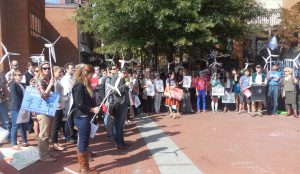 Concerned citizens and clean energy advocates gather on the downtown mall in Charlottesville for a National Day of Climate Action.

In probably the largest and most diverse environmental justice rally our community has ever seen, more than 150 residents of Central Virginia gathered in downtown Charlottesville last Wednesday with a clear, two-point message to our leaders: Stop the gas pipelines and address the climate crisis.

The event was part of a National Day of Action that included more than 200 demonstrations across the country, with citizens calling on leaders at all levels to take meaningful steps now to curb America’s carbon footprint and bring more clean energy online. The day of action was planned as part of the build-up to the United Nations Climate Change Conference in December in Paris where world leaders will make critical decisions that will impact generations to come.

Across the country, some of the largest actions were in places not generally known for big climate actions: Pittsburgh, Orlando, Phoenix and St Louis. In Virginia, folks rallied at Old Dominion University in Norfolk, Virginia Commonwealth University in Richmond, and in Leesburg and Roanoke.

Opening the Charlottesville event was Susan Elliott, the city’s Climate Protection Program Coordinator. “Here in Charlottesville, over 25 organizations have already enthusiastically stepped up to support Energize!Charlottesville, our local campaign to save energy and win the $5 million Georgetown University Energy Prize. Residents are interested in what they can do to save energy at home and how to make clean energy choices. That’s one way we can take action together to benefit our community and do what’s right for the climate.” 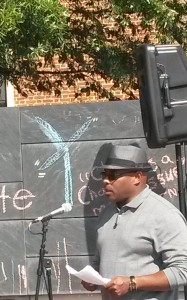 Adrian Jones, a resident of Union Hill, Va., where a huge natural gas compressor station would be located along the Atlantic Coast Pipeline, speaks to the crowd about his opposition to the project.

Wednesday’s rally was attended by a diverse crowd of business professionals, students, climate justice activists, concerned energy consumers, and others. A large contingent of people against the proposed massive natural gas pipelines in the region also attended, voicing concerns for both local ecological impacts as well as the climate impacts of the projects.

Dahvi Wilson of Apex Clean Energy, a renewable energy company based in Charlottesville, summed up a business perspective: “Those of us who are watching closely can already see a tectonic shift beginning. The writing is on the wall. Corporations are seeking to source more of the power they need from renewable generation facilities. The U.S. is recognizing our role in creating this problem, and we are embracing our responsibility to help solve it.”

In brief remarks to the crowd, Del. David Toscano described the political lay of the land in Virginia’s General Assembly: “Some of my colleagues are voting and talking as if they don’t believe in science. … Well, let me tell you, we have the people on our side, the times are changing and we’re going to get more renewable energy in this country and in Virginia.”

Earlier this month, Governor Terry McAuliffe emphasized in a newspaper commentary that the effects of climate change are happening now, here in the commonwealth, and stressed the broad benefits of building a clean energy economy.

Planning for more national climate actions for the weekend of November 28 is now taking shape to keep the drumbeat of citizen involvement building and the grassroots momentum growing in every corner of the country.

In Central Virginia, we can take this opportunity to realize that as we vigilantly fight the Atlantic Coast Pipeline and the other natural gas pipelines proposed in the region, we do so alongside other communities across the country and around the world working to prevent fossil fuel extraction, transmission and combustion in their communities. We resist them as communities have resisted new coal mining operations and coal-fired power plants, both because the direct environmental harms are too serious and because we know it is essential to transition to large-scale clean energy to combat the climate crisis.

We carry that spirit forward.