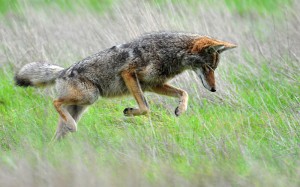 A coyote hunting in the Tennessee Valley. Photo by Matt Knoth

Once found in the United States only in the western plains, coyotes are increasingly at home in the cities and suburbs of central Appalachia.

Michael Fies, of the Virginia Department of Game and Inland Fisheries, says that coyotes were first spotted in the mountains of southwestern Virginia in the late 1970s and have since spread throughout the state. This pattern has repeated across the region.

Male coyotes are generally larger than females, weighing 18 to 44 pounds compared with females that weigh on average three pounds less. Adult coyotes are between three and four and a half feet in length. “Coyotes are now in every county of the nation, except maybe Hawaii,” the Fairfax County, Va., Park Authority reports.

Fies estimates that the Virginia coyote population numbers at least 50,000. “Populations grew quickly when they first arrived,” he says, “and now they’ve kind of stabilized,” particularly in the western part of the state.

Coyotes are predators that can inflict costly losses when livestock becomes prey. But according to the West Virginia Division of Natural Resources, coyotes also help control the population of animals such as white-tailed deer, mice and rats.

Coyotes are very adaptable and “thrive very well in the presence of humans,” says Fries. “We are getting increased reports of coyotes in urban areas. So, although there’s not as many of them as there are in the rural areas, I would say that we can expect an increase in urban coyote issues in the future, for sure,” he says.

Scientists from Ohio State University studying urban coyotes in the Chicago area have found that male and female pairs mate for life and only seek new partners if their mate dies. According to an article in National Geographic, this behavior gives the urban coyote a competitive advantage, since it allows the female to produce larger litters which the male then helps to raise and protect. This study also found that urban settings tend to make coyotes more nocturnal, since they choose to hunt when fewer humans are outdoors.

According to the Humane Society of the United States, however, encountering a coyote during the daytime does not indicate that the animal sick. While it is true that coyotes have a greater risk of contracting rabies in areas with a large population of unvaccinated domestic dogs, being active during the daytime is not an indication that they have contracted this disease.

The Wiley Coyote
› Coyotes can run up to 40 mph and are also good swimmers
› The main predator of coyotes in central Appalachia is humans
› Coyotes will eat almost anything, but their main diet consists of fawns, rodents, rabbits, berries, fruits and carrion
› The size of coyote packs depends on the availability of resources
› Gestation lasts approximately 62 days, after which the female coyotes give birth to 4-6 pups

A Virginia Tech study of coyotes completed earlier this year documented another adaptive behavior: when a population’s mortality rate is high, the females respond with a higher reproduction rate.

“Sixty-three percent of the coyotes we collared were killed within the first year of being captured,” Dana Morin, a graduate research assistant on the Virginia Tech study told Allegheny Mountain Radio. “But the population density isn’t decreasing. And that’s because mortality doesn’t really have an effect on population density, because their reproduction increases in response to increased mortality.”

Coyotes in North Carolina are having a negative impact on the endangered red wolf population, according to the National Wildlife Federation. When unable to find a mate, red wolves will breed with coyotes, and this interbreeding is one of the greatest threats to this fragile wolf population. Red wolves can also be easily mistaken for coyotes by hunters, and since 2013 at least 11 red wolves — or 10 percent of the entire wild population — have been shot.

In response, the N.C. Wildlife Resources Commission approved temporary rules in January that would limit coyote hunting in the counties where the red wolf is being rehabilitated.

Coyotes are naturally afraid of humans and generally avoid them, and attacks on humans are rare. When attacks do occur, however, they often involve coyotes that have been fed by humans or humans who were trying to save their outdoor pets from an attack, according to the Humane Society.

It would seem that coyotes are here to stay. Let’s all take precautions so that humans, pets and coyotes can coexist peacefully.