Ready for the Wild: Rescue Rehabilitates and Releases Young Bears 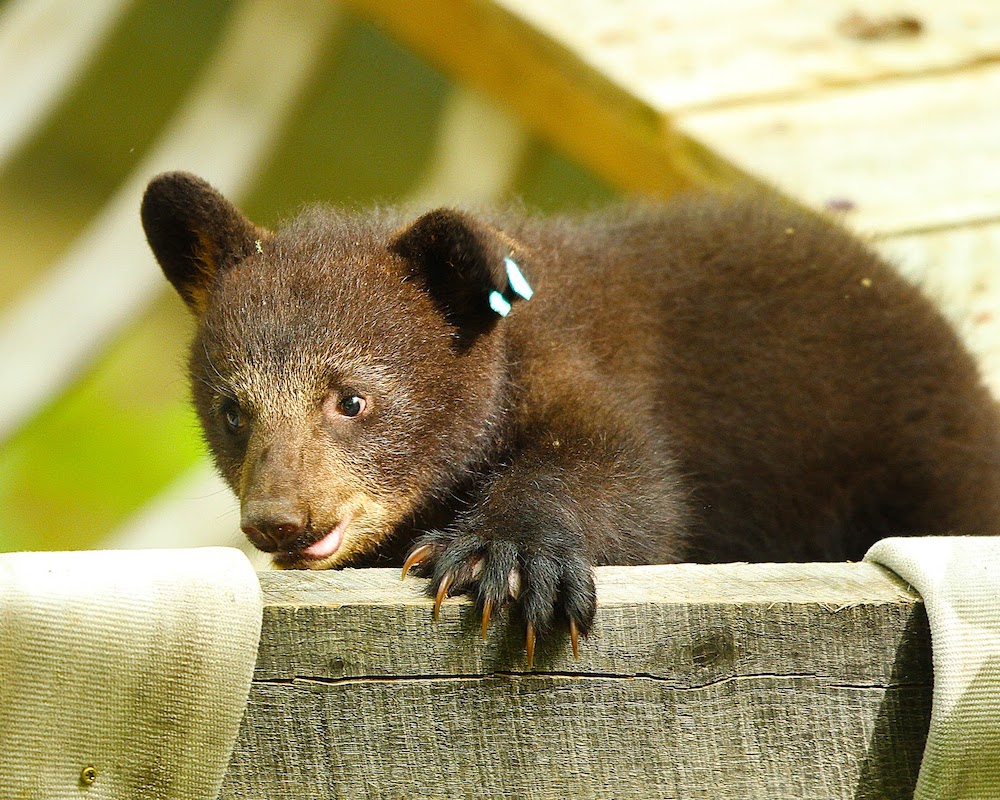 Being a decent neighbor isn’t something that should stop with the humans next door — it also includes backyard animal visitors. Birds, squirrels, deer … and bears!

Appalachian Bear Rescue, a black bear care facility located in Townsend, Tennessee, is dedicated to rehabilitating young bears up to age 2 that need extra care and preparation to reacclimate to their natural environment as healthy, independent members of the wildlife community.

The rescue will celebrate its 25th anniversary this year, and has rehabilitated more than 300 bears from eight different states, including as far as Arkansas.

“While we are based in Tennessee, we would be willing to, and have worked with, wildlife agencies from any state,” says Victoria Reibel, one of the black bear curators at Appalachian Bear Rescue. “We are a bit unique in that aspect.” 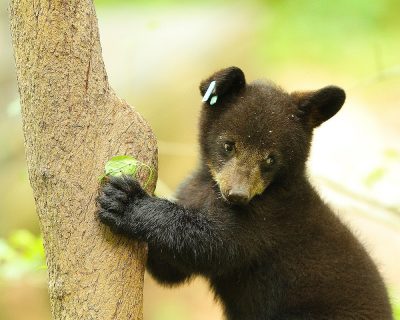 Raven the bear cub arrived at the rescue in May 2020. Photo courtesy of Appalachian Bear Rescue

The facility aims to re-create a nurturing environment for the bears by offering a nursery, two recovery centers and four half-acre natural outdoor enclosures to explore. The specific area where the bears begin depends upon their age and condition. Newborns start off in the cub nursery and are bottle-fed around the clock, while older bears may be able to go directly out into the spacious outdoor enclosures. These are crafted to closely resemble a forest, with the addition of enrichments such as platforms and hammocks for added interaction. These wild-simulated enclosures are the last step before the bear can be confidently released back into the wild, always near the same area of original rescue.

Leading reasons that bears are brought to the rescue facility include human-bear conflict, limited food resources and bears that have been orphaned due to automobile accidents.

Reibel emphasizes that their facility is not a zoo by any definition, but a rehabilitation center helping bears to recover and get released into the wild as healthily as possible.

If a bear comes in with an injury or extreme sickness, they begin their time in the climate-controlled Red Roof Recovery Center. This building has a retractable ceiling that helps keep bears with leg injuries from climbing too high and further hurting themselves, allowing them proper healing time from an injury before venturing outside. 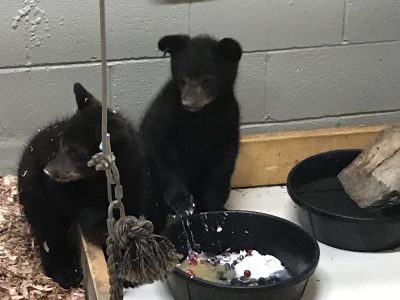 The Hartley House — a climate-controlled recovery center named after a bear that previously spent time at the facility — serves as a space for cubs who have outgrown the nursery but are still small enough to potentially squeeze through the electric fencing around the simulated-wild enclosure. When the time arrives to move outside, a door connecting the Hartley House to the outdoor enclosures allows for an easy transition.

This past May two sister cubs, Raven and Chickadee, arrived at the facility. The pair was rescued from Sevier County, Tennessee, after the center received a call from a community member who noticed the cubs alone, without the mother bear seen a couple of days before on her property. The cubs were severely dehydrated when Appalachian Bear Rescue found them, and Chickadee had contracted a ringworm infection.

They were about four months old when they arrived, weighing a healthy 11 pounds. The cubs spent six formative months at the facility, and weighed around 90 pounds at their time of release in November.

“They have their own personalities, but in the wild, they are independent by nature,” Reibel says. 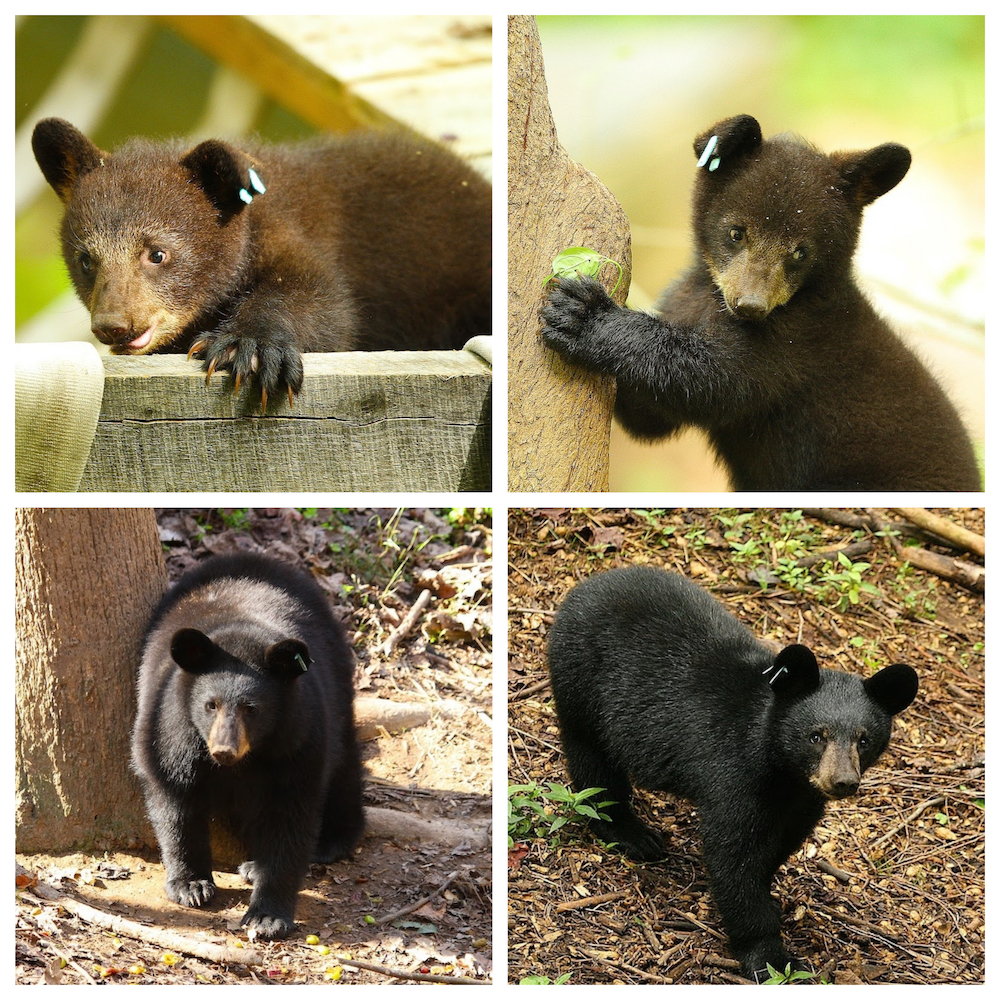 Bear cub sisters Chickadee, left, and Raven, right, spent six months at Appalachian Bear Rescue. The top photos were taken shortly after the pair arrived in May 2020, and the bottom photos were taken after the sisters were moved to the rescue’s outside enclosure before being released into the wild in November 2020. Photos courtesy of Appalachian Bear Rescue

Although they coexisted and played together well at the facility, Raven and Chickadee went their separate ways once released back into the wild. This behavior is consistent with other of-age bears.

“There’s not really a consistent or stable trend [in bear rescues],” says Reibel. “It varies from year to year.”

According to Reibel, the number of bears that need to be rescued increases if there is a hard mast failure, or a lack of acorns and chestnuts. Shortage of these important black bear foods makes it more difficult for them to gain adequate weight in the wintertime.

“If [hard mast failure] happens, then we tend to get more bears in that year just because there’s a lot more seen that are struggling or starving,” Reibel says.

Besides food deficits, the most common cause for rescues is orphaned bears as was the case for Raven and Chickadee. If a call comes through about a potential abandoned bear on someone’s property, Appalachian Bear Rescue typically allows a 48 to 72-hour window before arranging for pick-up to ensure the mother will not be returning for the cub.

Most calls come from someone in the public noticing a transition from seeing a mama bear and her cubs around, to only seeing a cub, according to Reibel. Members of the public typically contact Appalachian Bear Rescue directly. The rescue then defers to the Tennessee Wildlife Resources Agency, the state wildlife agency that goes to collect the bear cub per Appalachian Bear Rescue’s permit.

After the state agency collects the bear, responsibility shifts to Appalachian Bear Rescue, and the cub receives a check-up. The University of Tennessee Veterinary Clinic first makes sure the cub is ready to enter the rehabilitation center. If the cub is extremely malnourished at the time of rescue and needs to have an IV for a couple of days, they are kept at the veterinary clinic to receive appropriate medical treatment before traveling to the rehabilitation center.

Bearing the Risks of Conflict with Humans

“As more and more visitors come to the Great Smoky Mountains, that always creates more opportunity for conflicts to occur between bears and people,” says Reibel.

Human and bear conflict can include automobile accidents from increased traffic and bears feeding off of available human food sources such as trash cans and bird feeders. This can result in interactions with the public, which sometimes leads to a need to relocate the bears or even a need to euthanize the bear if the conflict becomes a large enough problem.

Reibel noted that black bears adapt exceptionally well to living in and around urban areas. She states that this can in some ways be seen positively because it widens the area for their potential habitat, but the downside is that there is increased exposure to easy-to-reach human food sources.

“They’re very opportunistic in their eating, so if they can knock over a trash can and get the amount of calories that they need to get versus picking single blueberries off of a bush one-by-one, just like me or you, they’re going to go for the easier option in order to survive,” Reibel says.

Once black bears find these food sources, they usually continue to get their calories in that way and find it difficult to go back to natural sources, or the “harder way,” when trash cans are enticingly abundant. 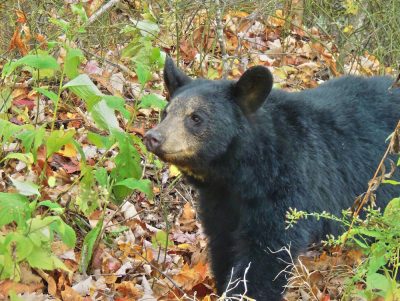 “They can smell over 18 miles away, so you could imagine a garbage can in a park that isn’t a bear-secured garbage can,” Reibel says, describing how tempting unsecured trash is to a black bear.

For humans, learning how to become a better neighbor to black bears includes recognizing what appeals to bears and mitigating the use and disposal of those items. Neighborhood attractants include not only household garbage but also recycling, bird feeders, grills and pet food.

North Carolina State University is conducting a study on human-bear interaction in which researchers are capturing bears in and near Asheville, North Carolina, and releasing them with GPS radio collars. The study began in 2014, and the current research phase began in 2019 and is set to run through 2023. Researchers are collecting data with the goal of forming effective management plans and monitoring change after educating residents on responsibly cohabitating with bears through an education-based project called BearWise. Developed by biologists and backed by state agencies, the BearWise program provides safety tips about how people can live responsibly with black bears.

Appalachian Bear Rescue suggests that people do not put out bird seed during the times that bears are active. Instead, continue to provide a food source for birds when they need it most in the wintertime and store feeders away from March to November when bears will be searching for extra caloric intake.

“We often call [bird seed] the gateway drug into human attractants,” she continues. ”Once they find those bird feeders, it’s rare that they stop eating on their own.”

For those who enjoy year-round bird-watching, getting a birdbath or planting native flowers in the yard are options that could offer sightseeing opportunities while the feeder is stored away in the non-winter months.

When it comes to learning more from the experts on this topic, there are several opportunities to choose from.

The BearWise website provides bear safety tips for people to use at home and outdoors, along with printable educational handouts and advice for how communities can co-exist alongside black bears. Appalachian Bear Rescue offers several virtual programs through their website. A series of educational programs held twice per month are offered through Zoom, either by a one-time annual fee of $50 per individual that includes all programs or for $10 per class for non-members.

To learn more about Appalachian Bear Rescue or to sign up for events, visit their website at appalachianbearrescue.org. Find out more about BearWise at bearwise.org.