Pedal in the Mountains 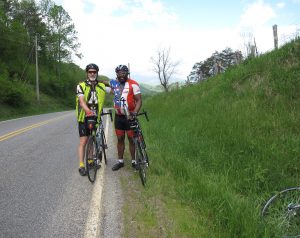 Jim Artis, right, stopped in Haywood County, N.C., to visit with Zeke Yount, left, while on a ride from Maine to Florida. Photo courtesy Zeke Yount.

The roads and trails in Appalachia can be narrow, windy and steep. For a frequent bicycle rider, rolling hills are no great feat, but the mountainous topography of this region can discourage amateur riders. Fans of the two-wheeled vehicle can be encouraged to start pedaling with community or tourism-based models, from the mountains to the street.

Greenways — scenic paths often near an urban area — keep walkers, runners and bikers safe from car traffic and encourage non-motorized travel. Across from Cincinnati, Ohio, economic developer Southbank Partners is working with six cities along the Ohio River to create such a corridor. The 11.5-mile Riverfront Commons will be mostly funded by state and federal grants.

Started in 2014, the wide, paved trail and its auxiliary projects, such as transforming an old jail into office space and expanding a technical college campus, are estimated to have an economic impact of more than $1.6 billion, and will take 10 years to complete.

In three cities connected by the Riverfront Commons, the developers seed-funded bicycle renting stations. Cincinnati-based rental company Red Bike opened 11 stations in these cities this summer, including one at the trail’s start, near a riverside mall.

• Trails.com features road bike routes by state and includes some topographic maps and trail reviews.
• NCbikeways.com is an initial, beta release of an interactive map where you can plan your own bike route across North Carolina. Provide suggestions to help improve the site!

• Always use a clip-on rearview mirror when road biking to be aware of motorists behind you.
• Know how to change a tire and bring spare tubes.
• Be prepared for emergencies in areas without cell phone service. Call ahead to your destination to give notice of your arrival before leaving

A greenway accommodates leisurely riders, according to a study on bicycling tourism in southwestern North Carolina, but long-distance cyclists also benefit from support, such as bike-route signage on low-traffic roads. The study, called Bikes in Beds, advocates for establishing Scenic Bikeways — designated bike-friendly routes that feature access to majestic landscapes and traverse small towns.

Soon after Cycle North Carolina announced that its annual fall Mountains to Coast ride would start in Haywood County, the local tourism agency released this cycling tourism assessment. Organized group rides such as Mountains to Coast attract tourism to the towns that they stop in — an estimated $76 a night per rider, Bikes in Beds states. By encouraging bike-friendly branding and amenities, such as lodging with healthy breakfasts and cycling shops, small towns can feed this type of bicycle tourism. Infrastructure improvements, such as added shoulders, also provide high returns, according to the report.

Touring cyclist John Gates travels from Alexandria, Va., to rent a house in Blowing Rock, N.C., for a week every year with friends he met on bike tours. He rides the scenic stretch of the Blue Ridge in that area for its safety, as he feels that cyclists are recognized on the roads in western North Carolina, but he would like to do less searching around to plan his trips.

“Information about rides is important,” says Gates, “where is a good place to eat, selections of routes that are easy, moderate and challenging.”

“Cycling clubs are a really good way for people to develop friendships,” says Susan Notorangelo, long-distance cyclist and co-founder of Pacific-Atlantic Cycling Tours. Gates will be joining the company’s Eastern tour that follows the entire Appalachian Mountain chain from Maine to Georgia for four weeks in summer 2016. Not only do her tours bring ecotourism dollars to rural communities, they also encourage locals to get out on their bikes. “It shows people that it’s not just on TV, like Tour de France,” says Notorangelo. 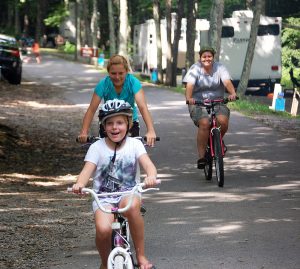 One hundred miles a day is a big step for most people, and Notorangelo encourages local governments to invest in bike trails as a starting point for beginner riders. A county park near Burlington, Ky., that opened in early October recognizes the value of mountain biking with a bike park for beginner to advanced BMX and mountain bikers. The England-Idlewild Bike Park is especially geared toward youth.

In the Virginia mountains, Shenandoah Mountain Touring promotes mountain bike events, including a mountain bike festival and tours throughout the year. For the past 20 years, co-founder Chris Scott has been working on a 450-mile mountain bike trail extending across Virginia that takes riders deep into the wilderness. The patchwork trail connects existing systems in national forests and was first ridden in its entirety in 2012.

In a region with an extensive hiking network, cycling further promotes ecotourism near Appalachia’s rural towns. Bike companies are catching on to this potential too. Bikes in Beds notes that bike brands are promoting “a new breed of cyclists … to be travelers and tourists” with the introduction of adventure bikes that cater to those wanting to explore by road, dirt or gravel.