Scientists, environmental advocates and citizens living near coal ash ponds have long been concerned about the possible radioactivity of coal ash. And rightly so. On Wednesday, Duke University released a study which shows that coal ash from all three major U.S. coal-producing basins contains radioactive contaminants. 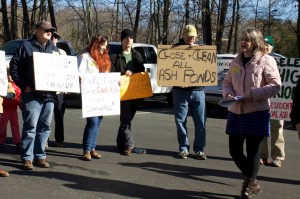 According to Avner Vengosh, professor of geochemistry and water quality at Duke University and contributor to the study, in addition to heavy metals found in coal ash, “we should also be looking for radioactive elements, such as radium isotopes and lead-210, and including them in our monitoring efforts.”

Currently, coal ash and contaminated groundwater leaking from coal ash ponds are not tested for radioactivity. “We don’t know how much of these contaminants are released to the environment, and how they might affect human health in areas where coal ash ponds and landfills are leaking. Our study opens the door for future evaluation of this potential risk,” Vengosh says.

The study found that the radioactivity was up to ten times higher in coal ash than in the coal it came from, and up to five times higher than average U.S. soil. The study also concluded that radioactivity is concentrated in the small particles of fly ash and that exposure to dry ash particles could also be of concern.

For some North Carolina residents living next to Duke Energy’s coal-fired power plants who remember the days when fly ash would float in the air like snow, landing on their homes and gardens, the study raises concerns about the health effects that kind of exposure had on their community. Caroline Armijo who grew up in Walnut Cove, home to Duke Energy’s Belews Creek power plant, believes the radioactivity of coal ash could be the root cause of the startling rates of cancer she’s observed in her home town.

“I applaud Duke University’s recent discovery,” says Armijo, “and pray this insight will lead us to a better understanding of the best way to clean up coal ash in our community.”

Currently, Duke Energy dumps its coal ash as a wet slurry into unlined pits, or as dry ash into landfills. At the Belews site — the largest in North Carolina – an unlined pond holds wet coal ash and a lined landfill, which is known to be leaking, holds the dry. Armijo and many others in the community want the utility to dispose of the coal ash in a way that protects them, the air and the groundwater from toxic metals — and from radioactivity.