{ Editor’s Note } This op-ed by our North Carolina Campaign Coordinator Amy Adams first appeared in the News & Observer on Sept. 4. 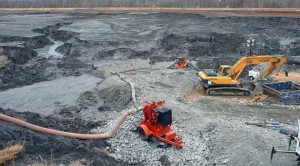 UPDATE: On Sept. 15, a North Carolina judge overruled the effort by DENR mentioned in this op-ed to block an agreement between Duke Energy and environmental groups that includes plans to excavate coal ash from three additional sites.

Two years ago, I was navigating the dramatic change in North Carolina’s Department of Environment and Natural Resources following the politically driven and hostile takeover of the agency by the General Assembly. The change ultimately forced me to resign as a regional supervisor with the agency. One of my complaints was DENR’s new mission statement, written by then-Secretary of Environment John Skvarla. The mission statement was so important to the new regime that our bosses gave us pop quizzes on the wording.

So let’s check in on how DENR is doing to meet its new mission. According to the “Fundamental Philosophy” section:

“Agency personnel, operating within the confines of the regulations, must always be a resource of invaluable public assistance, rather than a bureaucratic obstacle of resistance.”

The biggest issue DENR has had to deal with these last couple of years is coal ash, which affects residents from one end of the state to the other. Yet the agency has been the epitome of a “bureaucratic obstacle of resistance,” or BOOR, on the issue. The most recent BOORish behavior is the agency’s opposition to Duke Energy’s proposal to clean up coal ash above and beyond what the law requires. DENR argues this would “shortcut” the Coal Ash Management Act passed last year.

The law identifies four of Duke Energy’s coal ash pits that are particularly problematic and requires DENR to prioritize them for clean-up. It also requires the agency to rate the risk posed by the remaining coal ash sites and assign the level of cleanup, and it stipulates that any sites rated as “high risk” must be excavated and the ash disposed of in a lined landfill either on-site or off-site.

In addition to the four sites, Duke Energy, based on its own analysis, has opted to commit to the highest level cleanup at three additional sites, proposing the idea in motions filed in an ongoing legal fight among Duke Energy, DENR and environmental groups (Appalachian Voices included). DENR will not agree, clinging to a BOORish mentality that it and only it can designate sites for clean-up, and insisting that the lengthy, bureaucratic process must be followed.

“Environmental science is quite complex, comprised of many components, and most importantly, contains diversity of opinion. In this regard, all public programs and scientific conclusions must be reflective of input from a variety of legitimate, diverse and thoughtful perspectives.”

In court filings, DENR attorneys say, “Science should inform the decision as to which impoundments are closed first.” Yes, it should. As required by law, Duke Energy is collecting and delivering to DENR information, data and scientific analysis about its coal ash pits and has been including the public in that process. It’s the same data on which the agency will make its risk rating. So here, the BOOR is failing to consider analysis by Duke Energy, not to mention the perspectives of multiple environmental nonprofits, a suite of expert attorneys, a state judge and public opinion – all of whom have agreed to the highest level of cleanup at the three additional sites – as “legitimate, diverse and thoughtful.”

DENR’s creative interpretation of its own mission statement is just one reflection of this administration’s broader hostility to the notion that public servants have a responsibility to protect the natural resources and therefore the public health and welfare of the Tar Heel state. Gov. Pat McCrory is actively promoting our shorelines as prime areas for offshore oil and gas drilling. Environment Secretary Donald Van der Vaart stands against two fundamental federal laws – the Clean Power Plan, the first-ever rule to limit carbon pollution from America’s power plants, and a 2015 clarification of the Clean Water Act to protect many more miles of streams.

Commerce Secretary Skvarla (formerly of DENR) is promoting the idea that there may be natural gas deposits in Stokes County and is campaigning for budget money, aka taxpayer dollars, to lure fracking companies to North Carolina.

With all these anti-environmental positions, DENR has become more like a fossil fuel advocacy group than environmental protector. So this is progress according to the new DENR? It is painful to witness, and I am disheartened that the leadership has changed the agency to a shell of its former self.