America’s clean water laws have hampered the coal industry to varying degrees for decades, with the strength of various laws often determined by political winds. The effectiveness of the Clean Water Act and other laws often depends on whether the regulations reflect the latest advances in science and technology, and whether state and federal agencies have the will and resources to enforce the rules. That saga continues today. 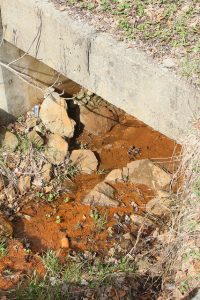 Acid mine drainage flows from a mountaintop removal coal mine into Looney Creek in Wise County, Va.

What: Mining exposes metal sulfides to air and water, which react to form acidic discharges. Affected water can harm or kill aquatic life and is not safe for recreation or drinking.
Where: Generated by surface and underground coal mines — both active and inactive — as well as hardrock mines.
It’s Still Happening: Acid mine drainage was among the 2015 water-quality violations at the KD #2 mountaintop removal mine in West Virginia.
The Law: The Clean Water Act and Surface Mine Control and Reclamation Act require that waterways meet state and federal water quality standards.
The Problem: The Clean Water Act allows mining companies to declare that a natural body of water is not a legally protected waterway but is instead a “waste treatment system,” exempt from the law. In 2002, a change to the Clean Water Act allowed companies to begin using untreated mining waste as construction “fill material.” Also, state enforcement of the federal surface mining law is inconsistent, and acid mine drainage can begin decades after mining ceases, which can leave state governments responsible for cleanup.

What: A mineral necessary for life in extremely small amounts, but even low levels of contamination can harm or kill aquatic life.
Where: Affects ground and surface water near coal mines and coal ash ponds.
It’s Still Happening: In a landmark 2012 settlement, Patriot Coal Corp. agreed to phase out its use of mountaintop removal coal mining in order to resolve $400 million in liability for selenium pollution cleanup in West Virginia.
The Law: The Clean Water Act and Surface Mine Control and Reclamation Act require that companies cannot pollute in excess of state and federal water quality standards.
The Problem: In 2013, Kentucky adopted weaker state selenium standards approved by the U.S. Environmental Protection Agency. Appalachian Voices and partner organizations filed a lawsuit challenging Kentucky’s changes. And in May 2014, the EPA proposed a new federal standard that is less protective of aquatic life than the current standard.

What: The amount of a pollutant that a waterway can tolerate while meeting water quality standards.
Where: TMDLs can be calculated for any pollutant in any impaired waterway.
It’s Still Happening: Virginia regulators set a TMDL for the South Fork Pound River. Citizens groups, including Appalachian Voices, alleged in a 2014 lawsuit that four mines owned by Red River Coal Company were violating their permits because the company’s discharges exceeded the TMDL for the entire watershed.
The Law: The Clean Water Act requires that states keep a list of impaired waterways and calculate how much of each pollutant each of those water bodies can safely handle.
The Problem: Many states have not completed their TMDL obligations. Kentucky, for example, had only assessed a quarter of state rivers and streams as of 2012. Of those, 67 percent were impaired, but officials set TMDLs for just 11 percent of those streams. What: Sludge leftover from washing coal, this mixture consists of water, coal dust, clay and chemicals, and includes toxic heavy metals.
Where: Stored in massive, often unlined impoundments, and has also been injected into underground mines. Leaches into ground and surface water.
It’s Still Happening: Studies from 2012 show that underground slurry injections contaminated drinking water in Prenter, W.Va. In 2013, the Brushy Fork slurry impoundment was permitted to increase its capacity to 8.5 billion gallons. And in 2014, more than 100,000 gallons of slurry spilled into Fields Creek at a West Virginia coal processing plant.
The Law: The Mining Safety and Health Administration is responsible for the structural safety of a slurry impoundment, and the Clean Water Act requires state and federal enforcement of water quality standards.
The Problem: State and federal enforcement of water pollution standards can be weak and intermittent, and MSHA-inspected impoundments have failed in the past, raising concerns about dam stability. 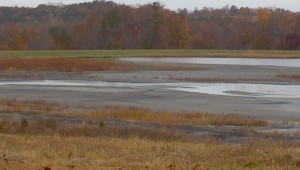 An unlined coal ash pond at the now-shuttered Riverbend Steam Plant in Mt. Holly, N.C. Toxic seeps from the ash ponds are contaminating nearby groundwater.

What: The waste left over from burning coal for electricity, coal ash contains 25 heavy metals and other chemicals.
Where: Often mixed with water and other industrial waste and stored in unlined impoundments near power plants, but can also be kept dry and stored in landfills. Dry ash contributes to air pollution, and liquid storage can infiltrate ground and surface water.
It’s Still Happening: Contamination of groundwater has occurred near all of North Carolina’s coal ash ponds. Between April and mid-July of 2015, the state health department deemed 301 wells near coal ash ponds unfit to drink (see map). Duke Energy denies that the contamination is related to its ash ponds. Read about the experience of one woman living near coal ash.
The Law: The EPA established the first federal regulations for coal ash in 2014. North Carolina passed its own regulations earlier that year following an impoundment failure that dumped 39,000 tons of ash into the Dan River.
The Problem: Federal rules do not classify coal ash as a hazardous waste. States are not required to adopt the EPA’s new standards, nor are those standards federally enforceable. The federal rule also leaves much of the responsibility for identifying coal ash contamination and seeking legal protection to citizens.

What: Wastewater from coal-fired power plants includes heavy metals, carcinogens, neurotoxins and other pollutants.
Where: Rivers, streams, lakes and ponds near coal-fired power plants. Comprises half of all industrial surface water pollution, and contributes to problems such as high mercury and lead levels in fish.
It’s Still Happening: From 2008 to 2011, Eden, N.C., noticed harmful trihalomethanes in city drinking water. Investigation revealed that a nearby coal-fired power plant was releasing bromides into the Dan River, which react with water-treatment chemicals to form trihalomethanes — compounds linked to bladder cancer. In June 2015, Duke Energy settled with Eden and a nearby town.
The Law: Under the Clean Water Act, EPA regulates industrial pollution of surface water, and sets maximum levels for contaminants in drinking water under the Safe Drinking Water Act.
The Problem: The rules governing power plant wastewater were last updated in 1982, and do not regulate heavy metals and a range of other pollutants. In April 2013, the EPA proposed a range of scenarios for updated regulations — two would lead to a 96% reduction in pollution, while others include modest reductions in some pollutants and no reduction in arsenic and lead levels. The agency intends to finalize the rules by Sept. 30, 2015 and is currently accepting public comments. Submit a comment here.

Read about the newly released draft of the Stream Protection Rule here.