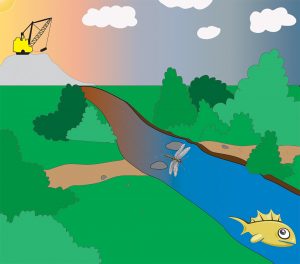 Most people have probably never heard of selenium, but for coal operators and fish it is a big deal.

The mineral selenium occurs naturally and is necessary for life in extremely small amounts, but it is toxic to aquatic life even at very low levels. Once in the environment, selenium accumulates in birds, fish and other aquatic organisms, building up to toxic levels in their tissues. It is especially harmful to fish, causing reproductive failure, deformities and even death.

In 2012, Patriot Coal Corp. agreed to phase out its use of mountaintop removal coal mining in order to resolve $400 million in liability for selenium pollution cleanup. Many coal mines and coal ash ponds release selenium, but it is difficult and expensive for companies to remedy the problem because even small amounts can be hazardous.

A brief, high discharge of selenium into a stream might not be that toxic at first. Yet over time selenium deposits in the stream’s soils can be absorbed through an organism’s diet and build up to toxic levels in insects and fish.

Duke Energy’s Dan River coal ash spill this past February is a good example. Although selenium concentrations in water downstream from the spill were relatively low, the selenium in the coal ash that coated the bottom of the river for dozens of miles poses a long-term hazard for fish and other aquatic life.

Selenium is expensive to remove from water, and its effects on the environment are complicated. This makes water quality standards for selenium a prime target for attacks from industries who wish to avoid water treatment costs and regulators who are easily bogged down in complicated science.

There have been quite a few strikes on selenium regulations in recent years, and many of them have focused on changing the basis of water quality standards for the mineral from the amount of selenium in the water to the amount found in fish tissue. Once adopted by individual states, water quality standards are used to determine which streams are impaired and to determine the amount of pollution allowed in permits. Every state with mountaintop removal coal mining has made some attempt to change its selenium standards in recent years, and the U.S. Environmental Protection Agency has tried several times to change the national standards.

A fish tissue-based standard seems to make sense from a purely scientific perspective, since selenium accumulates in fish over time. Yet these standards add complexity and costs to already underfunded and overworked environmental agencies. The changes also make it much harder for citizens to enforce these standards under the Clean Water Act because of the increased cost and difficulty of collecting fish for testing.

Collecting fish creates its own set of problems. Extremely polluted streams might not have any fish at all, or the only fish surviving might be less-sensitive species that accumulate selenium levels in their bodies at a slower rate. Repeatedly gathering fish from streams with selenium problems could also further stress those fish populations. Collecting fish for scientific purposes requires special equipment such as an electro-shocker and special permits that may not always be available. The process is also more time-consuming than collecting water samples. And even when specimens are collected, it is impossible to know how long a certain fish has been near a particular pollution discharge point.

Late in 2013, Kentucky proposed, and EPA approved, weaker state selenium standards that rely on fish-tissue testing. Appalachian Voices, along with a number of partner organizations including the Sierra Club, Kentuckians For The Commonwealth, Kentucky Waterways Alliance, Defenders of Wildlife, and the Center for Biological Diversity — represented by Appalachian Mountain Advocates — has filed a lawsuit challenging these changes.

The groups argue that the new standards are too weak to serve their intended purpose, and that the rules violate the Endangered Species Act because the EPA failed to consult the U.S. Fish and Wildlife Service as required by law. Fish and Wildlife has serious concerns about the new rule and stated in a letter to the EPA that the Kentucky standards “may result in negative impacts to federally listed species.”

In May, the EPA released a draft of a new national water quality standard for selenium. The agency has proposed to replace the single standard for long term toxicity of five parts per billion in water with a complex set of five different numbers and one formula.

EPA’s newly proposed standard is actually slightly weaker than the version the agency proposed back in 2002. The new draft standard includes an 8.1 parts per million criteria for whole fish, compared to the slightly stronger 2002 proposed standard of 7.9 parts per million. Among the many scientists and agencies that criticized the 2002 proposal, the Fish and Wildlife Service told the EPA that “Based on a large body of scientific evidence, the service believes these criterion values will not protect federally listed fish and wildlife species. Furthermore, the service believes these values are not even sufficient to protect the aquatic life for which the criteria were developed.”

In 2009, Tennessee legislators tried and failed to weaken that state’s selenium standards to those that the EPA previously abandoned in 2002. As a leading expert on selenium, Wake Forest University associate professor and U.S. Forest Service biologist Dr. Dennis Lemly told Tennessee lawmakers, “Based on the work I’ve done, 7.9 would kill a lot of fish.”

The federal environmental agency’s newly proposed selenium standards still face a peer review process and public comment period before they can be finalized.