A Deluge of Dam Removals

Why Some Stand Tall and Others Must Fall 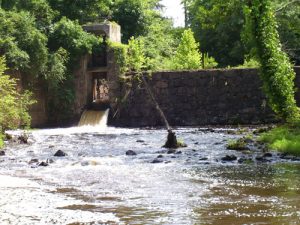 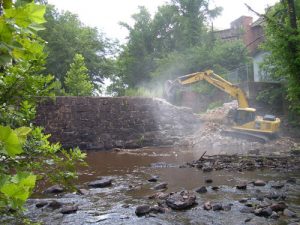 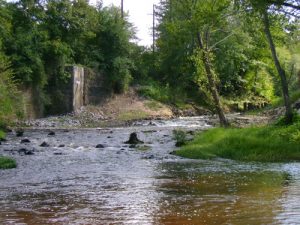 American Rivers’ 2009 Steeles Mill Dam removal project in North Carolina revitalized the area, opening up 15 miles of habitat for shad fish and fostering the creation of a paddling trail. The 15-foot tall dam powered a cotton mill, but at the turn of the millennium was no longer being used. Photos courtesy American Rivers

The high-profile failure of some of the United States’ aging infrastructure has caused devastation. In 2007, a bridge on I-35 over the Mississippi River in Minneapolis collapsed. Two years prior, levee breaches in New Orleans during Hurricane Katrina had catastrophic consequences. With the public eye focused on infrastructure, the game-changing removal of the Elwha Dam and Glines Canyon Dam in Washington state, the largest dam removal project in history, opened up national discussion on the role of dams in this country.

Initially, dams were erected for hydropower, irrigation, flood control and water storage for consumption and agriculture. According to the U.S. Fish and Wildlife Service, only 42 rivers in the country continue to flow free of dams, and a National Geographic article published this year notes that “some 80,000 dams taller than six feet — along with tens of thousands of smaller dams — still obstruct U.S. rivers.”

The advent of new techniques in energy production, wastewater treatment, irrigation and transportation renders many of these structures useless. As a result, a torrent of dam removals has occurred across the country in the past decade. A hydrologist with the U.S. Forest Service told Oregon Public Broadcasting that 548 dams were removed between 2006 and 2014 — nearly double the 298 removed between 1996 and 2005. The aim of most of these removals is stream restoration, as dams come with a host of negative environmental impacts, recreational restrictions and safety hazards.

Erin McCombs, regional associate director of the nonprofit American Rivers, estimates that there are 5,600 dams in North Carolina alone, many of which belong to long-closed textile mills and sawmills and no longer serve any purpose. “We look to remove a lot of these structures,” she says.”That’s really our angle.”

Currently, McCombs and her team are working on removing around 15 dams in the region, with one in eastern Tennessee slated to be removed this fall. The Citico Creek Dam in Monroe County was constructed in 1966 due to concerns that migrating warm-water fish would compete with native trout. Since then, researchers have found that the habitat would be inhospitable to warm-water fish, rendering the dam pointless. For half a century, the dam has segregated species into upstream and downstream populations, hampering genetic diversity, restricting nutrient flow and rendering aquatic organisms more susceptible to threats such as global climate change, poor water quality and disease.

According to McCombs, as dams slow the flow, water temperature increases. Ecosystems require balance, and wildlife are sensitive to unnatural shifts to their habitat. Some damage can be easily rectified; all that it requires, says McCombs, is “removing barriers to allow species to be resilient to climate change.”

Damage in other waterways, however, has been more extreme. Dams disorient migrating fish, the American Rivers website says, lengthening their journeys. Anadromous fish such as shad, herring and salmon, which move to salt water after birth and return to spawn in freshwater, find themselves blocked from returning to spawn. This has contributed to the dwindling populations of salmon in the Pacific Northwest and shad in the Atlantic states.

Diminished habitat due to fragmentation caused by dams also contributed to the decline of the Appalachian elktoe mussel, says McCombs, which is now federally listed as an endangered species.

Fontana Dam, run by the Tennessee Valley Authority, is 480 feet high, making it the tallest dam in the Eastern United States. Photo by Ashley Bradford.

American Rivers approximates that 2,540 dams produce electricity in the United States. Due to their generally larger size and the high cost of removal, most of these dams are not the aim of removal projects.

Hydroelectric power may be a relatively clean energy source, but the environmental degradation caused by dams is leading communities to tighten the reins on energy companies.

Since the spate of dam building in the mid-20th century, many of the long-term hydroelectric dam licenses granted by the Federal Energy Regulatory Commission have run their course. Energy companies face challenges when applying to renew their licenses, as FERC convenes with representatives of environmental, community, recreational and power companies’ perspectives to determine if a plant’s benefits outweigh the drawbacks.

In the spring of this year, the state of North Carolina sued Alcoa Power Generating, Inc., for control of the 40 miles of the Yadkin River where Alcoa operates. The lawsuit was an attempt to keep Alcoa from renewing its license to operate four hydroelectric facilities on the river. These dams had previously powered an aluminum smelter in Stanly County, providing hundreds of jobs. With the smelter’s closing in 2007, Alcoa began selling the energy on the national market. Community members vied for state control of the Yadkin’s flow because, as Will Scott of Yadkin Riverkeeper puts it, “You get into the question of ‘is there a public benefit anymore?’”

Complications arose for North Carolina in April and June of this year. “At the time of statehood,” Scott says, “this is a water that was used and navigated [therefore] it belongs to the state.” A judge concluded, however, that the section of river holding the dams was not navigable at that time, making it difficult for North Carolina to claim ownership. Later, a judge overturned the N.C. Division of Water Resources’ denial of a water quality certificate to Alcoa, effectively pushing the division to grant Alcoa the certificate. Scott remains hopeful, saying the state has other angles, like challenging whether Alcoa can prove a chain of title.

The lawsuit also unveiled emails suggesting that Alcoa misled state regulators regarding water quality. According to WFAE, Alcoa had entered a settlement agreement in 2007 with 22 community, business and environmental groups, promising to make land and water improvements in exchange for their support in relicensing, but the 2010 email revelations caused the North Carolina Wildlife Resources Commission to withdraw support for relicensing and churned up concern among other conservationist groups.

These rapidly reproducing fish with no natural predators have recently been found spawning in the Ohio River near Louisville, Ky., crowding out profitable fish such as bass and catfish, according to Mark Marraccini of the Kentucky Department of Fish and Wildlife Resources. In 2013, commercial fisherman competing in a tournament pulled 82,953 pounds of Asian carp from Kentucky and Barkley lakes in only a weekend’s time.

The U.S Fish and Wildlife Services reports that approximately 10,000 non-indigenous aquatic species exist in U.S waterways, with many posing threats to the local environment. Large dams which block fish migration actually help when those fish are invasive, acting as, Marraccini says, “natural barriers to [carp] migration.”

In Kentucky, the state’s Department of Fish and Wildlife Resources plans to assess the feasibility of closing locks in dams along the Monongahela, Muskingum, and Allegheny rivers in its strategy to reduce the population of Asian carp. Locks on dams assist ships in essentially stepping up or down the river one water level at a time. “Every time that you open the locks to allow boats to go through,” Mark says, “you’re allowing a lot of fish to go back and forth.” Closing them keeps the population contained in one space, which helps commercial fishermen pull in more fish. These dams buy time and keep damage caused by the carp low while agencies search for more permanent solutions.

While some dams are removed to open up recreational activity, others provide it. The Federal Emergency Management Agency accredits 38.4 percent of U.S. dams with providing recreational opportunities. Fontana Dam, a 1940s-era hydroelectric power producer located in the Great Smoky Mountains of North Carolina, gave rise to the Fontana Village Resort which brings in 100,000 tourists annually.

Visitors come, in part, to see the historic Fontana Village, a construction town that housed the workers who built the tallest hydroelectric dam in the Eastern United States. The original buildings serve as the resort’s current lodgings; only 33 people reside in Fontana Village full time, most of whom work for the resort.

“We wouldn’t be here as a town, as a resort, if it weren’t for the dam,” town board member and employee of the resort, Sara Locke, says. “Most residents come by their ability to live here by living in the company’s housing.”

Recreational opportunities provided by Fontana Lake and the surrounding area keep the town strong. Those hiking the Appalachian Trail cross the approximately half-mile dam and marvel at the view from the top. Dam operators schedule water releases for whitewater rafting, and the Fontana Lake provides 238 miles of shoreline for swimming and boating.

Far below the surface, however, lies the remnants of five towns. The people of Proctor, Judson, Bushnell, Sugar Fork and Ja’pan had to relocate in 1941 so the Tennessee Valley Authority could flood their homes and form the basin.

Dams play a complex role, and there is no immediate resolution regarding the state of dams in this country, but finding balance is key. “We want to protect [rivers] for all their uses,” Scott says.