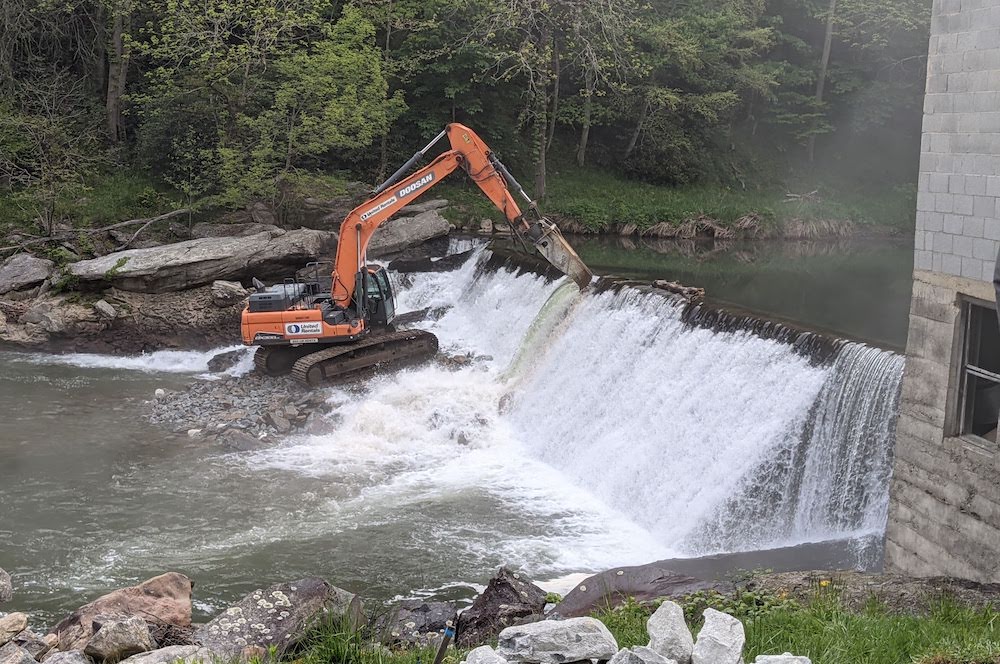 Removal of the Ward Mill Dam in May 2021. Photo by Gail Lazaras

The U.S. Fish and Wildlife Service removed the historic Ward Mill Dam on May 16, in an effort to improve the aquatic habitat of the Watauga River in northwestern North Carolina.

The five-day long demolition was a collaborative project between a group of local and national nonprofits and government agencies: American Rivers, Blue Ridge Resource Conservation and Development, MountainTrue, Watauga County Soil and Water Conservation District and the U.S. Fish and Wildlife Service. 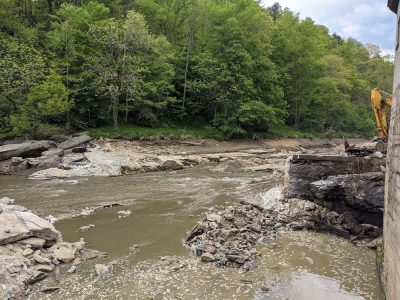 The Watauga River after removal of the Ward Mill Dam. Photo by Gail Lazaras

“The quickest thing you can do to restore a river is dam removal,” says Gail Lazaras, associate director of conservation at the national river conservation nonprofit organization American Rivers.

Dams pose risks to rivers in all sorts of ways. They increase water temperature, reduce river flow and block the natural passage of sediment and debris. Then there is the physical barrier dams create for fish and amphibians.

Hill, who serves as the Watauga Riverkeeper, worked with researchers from Appalachian State University before the dam was removed to collect data on the hellbender salamander, a species of special concern in North Carolina, and other aquatic species native to the Watauga River.

“There’s a whole list of subsidiary benefits [to dam removal], but if I had to choose one as immediate it would be fish passage,” Lazaras says.

Lazaras said the removal of dams can also mitigate risks of drowning and flooding.

Understanding the Dam’s Past

The proposed removal of Ward Mill Dam in 2017 prompted a survey of B.O. Ward House and Mill, the historic structures associated with the dam, by the North Carolina Department of Natural and Cultural Resources.

Historians Ellen Turco and Jason L. Harpe completed a detailed historical analysis of the site over a period of six months. Their report documents the life of Ben Ward, who took over operating the sawmill in 1932. Following a flood in 1940, he rebuilt the sawmill and operated the B.O. Ward House and Mill Complex until his death in 1970.

“This dam should be listed as a national historic site to what ingenuity can do,” community member Margaret Eggers wrote on a message board in 2020. “Ben was a marvel.”

The report also details the rise and fall of the lumber industry in Appalachia and the Ward family’s long-standing commitment to providing hydroelectricity for their community.

Ben Ward supplied power to 15 homes for $1 per month and free power to one church until new Federal Energy Regulatory Commission regulations prohibited it, according to On The Watauga.

FERC records show that after Ben Ward’s death, his son Ray received a license to generate hydroelectric power at the dam.

“It was a great resource for the community but at some point, it no longer technologically made sense,” Lazaras says.

In 2017, Ray Ward and his wife Virginia Ward surrendered the 30-year license to the FERC, permitting the removal of Ward Mill Dam.

In July 2020, Turco and Harpe submitted their findings to the Blue Ridge Resource Conservation and Development Council, Inc., a nonprofit that addresses water and land conservation.

Now that the dam has been removed, 35 miles of aquatic habitat in the mainstem of the Watauga River and 140 miles of streams across the watershed are reconnected, according to Hill.

Under the National Historic Preservation Act, the B.O. Ward House and Mill Complex remain. Two barns, a swimming pool, a house and a machine shop, all reminders of the ingenuity and resilience of the Ward family, will be placed on the National Register of Historic Places.

Historic preservation at the federal, state and local level has always been highly focused on the built environment, according to Lazaras. But rivers have legacies too.

“For tens of thousands of years, rivers have been free-flowing, and we set this thing up for the blink of an eye,” she says.

This broader perspective has helped communities understand the long-term impact of dam removal.

The information compiled in Turco and Harpe’s report will be used in the future to survey similar sites in Watauga, Wilkes and Avery County, according to Lazaras.

Several state and local organizations, including MountainTrue, have partnered with Appalachian State University to closely monitor the state of the river following dam removal.