A High Price for Low-Quality Water

Posted by The Mountain Citizen on Saturday, February 20, 2016

“Absolutely not,” says Hunt. “You can’t drink it. One day it looks like s—, the next day it’s cloudy looking. You never know what you’re getting when you turn the faucet on.”

Even so, he states that the worst part is when nothing comes out at all. While neither he nor his family drink the water, it’s their only choice for showers, washing clothes and more. And even that comes with problems; Hunt says that he and others occasionally get bad rashes after taking a shower. Like others in the area, Hunt and his family rely on bottled water for drinking and cooking — and that doesn’t come cheap.

“We drink about $300 a month in bottled water,” he says. “And that doesn’t include paying the water bill.” That water bill can vary wildly from month to month. In September, the bill was inexplicably $186.

Hunt is hardly alone in this situation. On average, Martin County has the eighth-highest water bills out of all water districts regulated by the Kentucky Public Service Commission, according to a September report released by the nonprofit law firm Appalachian Citizens’ Law Center and community group Martin County Concerned Citizens. 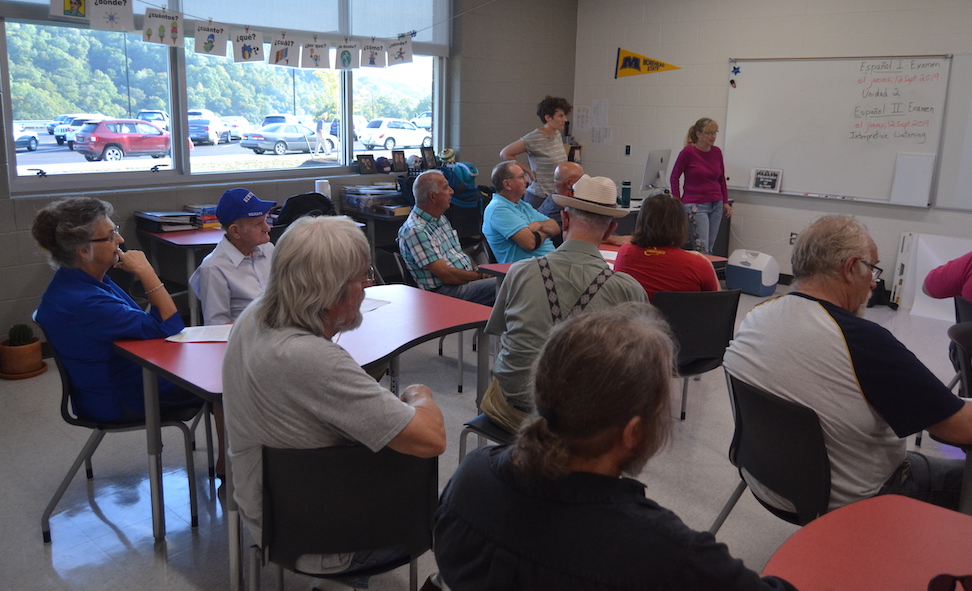 Residents expressed dissatisfaction with how state and federal funding was allocated in their community at a Sept. 12 Martin County Concerned Citizens meeting. Photo by Roger Smith/The Mountain Citizen

Leaky pipes remain a major problem for the aging water system, according to the report. More than 63 percent of water was lost somewhere between the treatment plant and customers in 2018, and nearly 70 percent between January and September 2019.

The district’s water also has a history of being polluted with unsafe levels of byproducts from chlorine disinfectants used in water treatment. A 2018 change in chlorination methods improved this, according to the report.

Still, preliminary results from water tests conducted by Martin County Concerned Citizens at 100 randomly selected homes in summer 2019 found that 15 to 20 percent of residences had levels of disinfectant byproducts that exceed the maximum allowable limit. A similar percentage had coliform bacteria, which is not always harmful but indicates that other pathogens could be in the water. In attempts to address the massive debt the system is in, the water board has increased rates by 42 percent since January 2018. This has been especially tough on residents as the county is one of the poorest in the state. 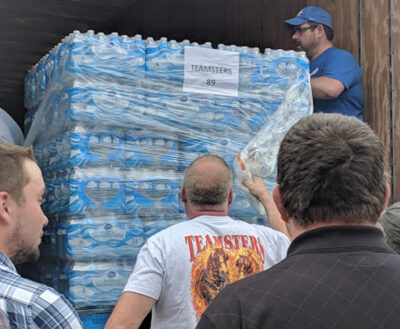 According to the report, water is currently unaffordable for nearly 46 percent of Martin County residents. Although the Public Service Commission is aware of the county’s financial situation, the commission’s legal position is that it cannot take water affordability into account when deciding on rate changes.

On Nov. 20, the commission announced that outside company Alliance Water Resources, Inc., would take over management of the district starting Jan. 1, 2020. The commission did not declare an additional rate increase, which is good news for residents like Martin County Concerned Citizens Chairperson Nina McCoy, who had been expecting a sharp increase.

McCoy and others have expressed concerns that the entire district could eventually be bought out by a private company, which can lead to higher water bills and other problems.

“We realize we always have to stay vigilant for the possibility of a move toward privatization since there seems to be a worldwide campaign toward that,” wrote McCoy in an email. “However, at this time having the technical and managerial expertise of hiring a management company along with the oversight of a citizen board is the best possible choice for our community.”

While Martin County’s water problems are extreme, they are hardly an isolated case. Many rural water districts in Kentucky and across the nation suffer from drinking water loss, contamination and more.

In November, the Kentucky Public Service Commission ordered the Southern Water and Sewer District to reduce the monthly bills for their 5,400 customers in Scott and Knott counties from $58.82 per month to $54.71 and outlined ways to further reduce water bills in the district.

Like Martin County, the district is plagued with aging infrastructure and what the Public Service Commission characterized as “years of willful mismanagement and neglect” on the part of the board and general manager, who were replaced earlier in 2019. A $1.5 million grant from the federal Abandoned Mine Lands Pilot program is slated to help pay for new water meters in the district.

More than 1,600 communities across the country, including Martin County, have drinking water that is contaminated with unsafe levels of trihalomethanes, a byproduct of chlorine disinfectant used in water treatment, according to a 2017 report by the nonprofit Environmental Working Group. Many of these are rural farming communities.

The drought led to a severe water shortage in Benham, Ky., in October. After water supplies dropped to one-fifth of normal levels, the rural community had to start pumping from the river — but the problems didn’t stop there, WYMT News reported.

The 1970s-era water lines couldn’t handle the restored pressure once the river water started flowing through them, causing multiple line breaks in mid-October, according to WYMT News. Benham Mayor Howard White told the news station that the city does not have the funding to fix the lines, and that another six-inch line break could cause the whole area to lose water.

Luckily, no additional line breaks had occurred as of late November, according to the Benham City Clerk’s office. The city received help from nearby Barbourville, Ky., as well as from two statewide utility associations.

A major increase in federal funding for drinking water systems is needed, wrote lawyer Madison Condon in the American Bar Association’s October issue of Human Rights. Condon states that less than $2.8 billion in federal funds were allocated for water infrastructure projects in 2019 — less than 0.5 percent the amount the U.S. Environmental Protection Agency estimates is needed. 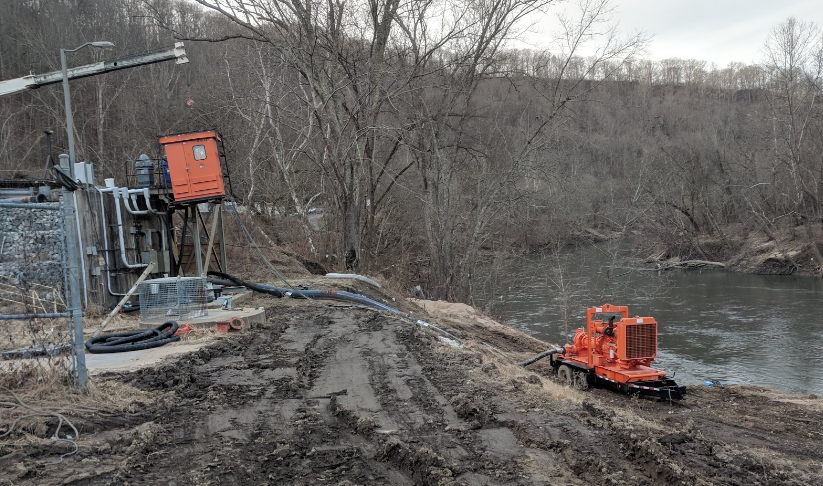 The water intake system at the Tug Fork of the Big Sandy River has experienced frequent failures and caused two water supply crises in 2018. Photo by Ricki Draper

Just this fall, $4 million in federal grants was announced for Martin County’s water system, but much of the money is intended to support water service for a federal prison, not to fix residential water lines. Read more in the October/November issue of The Appalachian Voice at appvoices.org/VoiceAMLPilot.

“Not only are water quality violations more likely to occur with water systems that service minority or low-income populations, but oft-discussed solutions to America’s rural drinking water crisis, such as privatization and regionalization, fail to address the unique barriers that poor communities and communities of color face,” wrote Condon.

In a November 2018 order approving the second Martin County rate increase that year, the Kentucky Public Service Commission stated that the water district “currently operates in a constant state of emergency and its ratepayers are suffering the dire consequences of decades of poor choice made by its management and commissioners.”

When the water board requested a 49 percent rate increase in January 2018, Martin County Concerned Citizens intervened in the case in front of the Public Service Commission.

“And when that happened, the previous water board all quit,” says Nina McCoy of the community group. “They’re not used to having to answer to citizens. They’re only used to having to do whatever they want to do.”

The Public Service Commission eventually approved two increases that amounted to a 42 percent rate hike. In the Investigations since, the commission found that there hadn’t been a completed audit by the Martin County Water District since 2011 — meaning those rate increases were approved without any evidence to show how much money was needed.

“The water district was $1 million in debt at the time when this new board took over in January 2018,” says McCoy. “They say that there’s no documentation, which means to me that money was misappropriated. Audits are supposed to be required under the law, so why are people able to get by without following the law while at the same time just saying to increase the rates on the common people?”

“It’s a very tangled web here, it’s not an easy story of bad water,” says McCoy, referring to the influence of local elites. “It’s corruption, it’s not having to be accountable to the public.”

The Martin County Water Board had not responded to requests for comment as of press time.

This winter, Martin County Concerned Citizens is working with the University of Kentucky on water testing and a health survey. Ricki Draper, the community engagement coordinator for Livelihoods Knowledge Exchange Network, works closely with Martin County Concerned Citizens and states that they expect to be able to circulate the results through a series of community meetings in early 2020 where the group also hopes to discuss possible solutions to the water crisis. Meanwhile, water will still be on the minds of Martin County residents.