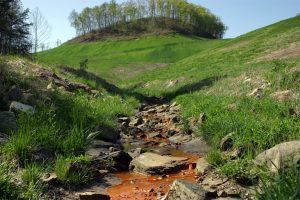 On July 16, the Department of the Interior released a draft of the long-awaited Stream Protection Rule to regulate surface coal mining. If done right, the final rule could safeguard streams and people by reining in the ravages of mountaintop removal.

While the proposed rule appears to take steps in that direction, it is far too weak and would still allow coal companies to blow the tops off mountains and bury mountain streams with the waste. Comments from citizens like you demanding a strong rule will be critical. (We’ll have more details soon on how you can get involved.)

In announcing the proposal, Interior Secretary Sally Jewell spoke of the body of science that demonstrates the health threats and ecological harm caused by mountaintop removal. We commend this recognition of the facts.

She also tacitly acknowledged that the destruction wrought by mountaintop removal severely impedes efforts to make “coalfield communities more resilient for a diversified economic future,” and we vigorously applaud that.

But we emphatically disagree with the secretary’s statement that the proposed rule represents a “balanced approach to energy development.” There is nothing balanced about blowing the tops off ancient mountains and jeopardizing the health of thousands of Americans.

Appalachian Voices, our partner groups and citizens directly impacted by mountaintop removal have met repeatedly with the Obama administration to press for a rule that would make a positive and profound difference on the ground. Many of you have contacted the administration as well. Still, this proposal falls short.

This is the administration’s first, and probably only, rule directly addressing mountaintop removal. It’s taken five years. In the meantime, mountaintop removal is still happening, and it’s moving closer to communities. It remains the overwhelming environmental threat to Appalachia’s communities and natural heritage. This rule is the president’s best opportunity to institute lasting protections against the abuse this region has suffered for decades. We need him to take it.