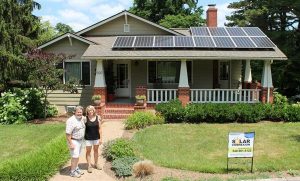 It’s like Christmas in July — for those of us who get excited about energy news, at least.

Last week, Virginia’s utilities released their long-term plans to meet electric demand. Here we unwrap that bright and shiny package and take a look at what mix of resources Appalachian Power Co. plans to pursue between now and 2029.

What would you expect APCo to include in its plan? It wouldn’t be a surprise to see huge investments in solar and wind; after all, clean power is growing rapidly in the commonwealth. For example, in the first three months of 2015, clean energy jobs picked up rapidly to the point that Virginia was ranked seventh in the country, counting biofuels and other clean transportation projects. Solarize initiatives and institutions are further fanning these flames, and this fire now appears to be reaching the utility level, too. With utility participation in this trend, there is a chance to realize serious health, economic and employment benefits.

And there is another important consideration in Virginia. Last year, the State Corporation Commission, which regulates Virginia electric utilities, directed APCo to look at ways to meet national carbon pollution reduction goals.

Now that APCo’s latest long-term plan is out, we have a window into how the company hopes to meet future demand. We can now ask how these options promote healthier communities, lower overall energy bills and create more sustainable clean energy jobs in the company’s service area, which includes much of western Virginia. And we can see how its plan interacts with new pollution standards.

Here are five points to help illuminate the plan: its purpose, the mix of sources, how energy efficiency is treated, the role of fossil fuels, and the scale of renewables.

1. APCo calls its primary option the “hybrid” plan. According to the plan summary: “While not the least-cost plan, the Hybrid Plan, when compared to other portfolios, attempts to balance cost, the potential risk of a volatile energy market.” That last phrase can help defend the options based on the fluctuations in natural gas prices and may refer to regulations, too.

3. But let’s look at energy efficiency. Currently, there are no APCo efficiency programs underway in Virginia. There is, however, a set of “demand-side management” programs that the commission approved to begin later this year. And the company does fund low-income weatherization. Still, its Hybrid Plan largely ignores the opportunity to expand energy efficiency, which under the plan accounts for just 1 percent of energy needs by 2029. The state goal endorsed by Governor Terry McAuliffe is 10 percent savings by 2020. Only by developing much more robust energy efficiency programs can APCo significantly invest in reducing customer bills, help create jobs in home energy assessment and retrofitting, and avoid the need to develop costlier sources.

4. Clinch River Power Plant units 1 and 2 are still on schedule to be converted to natural gas now and then retired before 2026, and unit 3 is close to being retired. Glen Lyn is now also retired. While the Hybrid Plan describes pursuing constructing 836 megawatts of combined-cycle natural gas units, it appears the company plans to build those plants out of state, limiting the growth of carbon emissions in Virginia, but leading to an increase in the carbon footprint of APCo’s Virginia customers.

While APCo representatives stress that the resource plan document is merely a snapshot in time and subject to changes and evolution, it’s worth engaging with the utility about what this plan says about its priorities.

Since APCo’s choices figure into Virginia’s ultimate compliance with the Clean Power Plan, it’s critical that the utility consider how to maximize benefits for customers as it works to meet emissions targets. Over the next 15 years, APCo must plan to reduce its total annual carbon pollution, not just slow its growth. The goals for greenhouse gas reductions are within reach, and our energy choices send signals that echo louder than ever across the Southeast.

As APCo navigates permitting and rate-setting processes for its vision of future clean energy projects, customer involvement will be essential. We’ll need to be ready to challenge any and all barriers to smart renewable energy investments that diversify local energy sources, create jobs in the clean energy sector and result in healthier air in APCo’s service region.