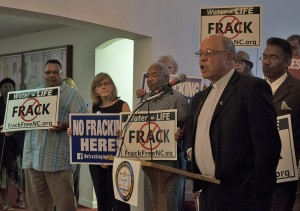 Rev. Hairston, president of the Stokes County, N.C., NAACP, speaks at an event to bring attention to disproportionate environmental threats in low-income communities of color. At left, a concerned resident holds a sign asking for the state to designate Belews Creek as a high-priority coal ash cleanup site.

Story by Julia Simcoe and staff

Appalachian Voices joined representatives of the National Society for the Advancement of Colored People in Stokes County, N.C., last May to stand in solidarity against disproportionate polluting in low-income communities of color. Representatives from local and national levels of the NAACP spoke at the event, joined by Karenna Gore, director of the Center for Earth Ethics at Union Theological Seminary and daughter of Al Gore.

Stokes County is home to the coal ash ponds at Duke Energy’s Belews Creek Steam Station. The two communities closest to the ponds — Walnut Tree and Belews Creek — are predominantly African-American and low-income, although the county as a whole is less than 10 percent African-American.

All 14 of Duke’s N.C. coal ash ponds were found to be polluting ground and surface water, and recently, close to 200 households near some of the ponds were issued notices from the state health department advising them to not drink or cook with water from their wells (see full story on page 24).

The state’s recent decision to drill an exploratory core sample to assess natural gas reserves in Walnut Tree has led to concerns that hydraulic fracturing might come to the area.

Tracey Edwards grew up next to the Belews Creek Steam Station and remembers when coal ash used to fill the air, landing on their homes and gardens. She recalls eating from the garden and worries that the ash may have affected her health.

Edwards feels she has already dealt with too much pollution, and does not want fracking to come to the community.

Jacqueline Patterson from the NAACP urged the crowd to see connections between racism, healthcare and pollution. “Sixty-eight percent of African-Americans live within 30 miles of a coal-fired power plant,” she said. “African-American children are five times more likely to enter into the hospital from asthma attacks and three times likely to die from asthma attacks, so this is definitely a moral issue.”