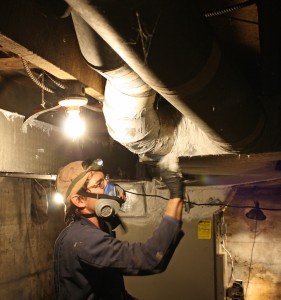 On-bill financing programs are a way for utilities to offer energy efficiency upgrades with no up-front cost to customers. After receiving the upgrades, customers see immediate savings. A portion of the savings goes back to the utility to pay for the upgrades through residents’ monthly bills (hence the name on-bill). When the improvements are paid for, residents pocket all their utility savings, which could be up to a 40 percent reduction in their bill. In turn, residents are able to use what they would otherwise be spending on electric bills to further stimulate the local economy.

Energy efficiency upgrades covered by most on-bill financing programs include air sealing, insulation, duct sealing, and heat pump repair or replacement, depending on what needed improvements are identified through energy audits. General contractors have specialized in energy efficiency certifications in order to do this work. Because this work is more labor intensive, every dollar that is redirected from the energy sector and spent in the home improvement industry has a more prominent impact on the local economy and jobs.

According to The American Council for an Energy Efficient Economy, a dollar spent in the local economy has more than double the positive effect on domestic employment and wages of spending a dollar on utility bills. John Kidda is the founder of reNew Home, Inc., a Boone-based home energy improvement company. “An additional $300,000 annual revenue stream would be a game changer for my business,” he says. “It would mean at least two new employees.”

The ideal on-bill financing program is accessible to everyone because it is tied to the meter, meaning once the renter or homeowner moves, the on-bill financing charge will not follow them but will instead be paid by the next occupant or owner who will also see savings. The program that works best also operates without a credit check, with eligibility instead being based on utility payment history, thereby removing traditional barriers of getting a loan.

Appalachian Voices is working in the High Country to promote and help develop programs that will benefit residents who are suffering from poorly constructed or aging homes. Blue Ridge Electric Membership Corporation (BRE) provides electricity to most of the High Country. The rural electric cooperative serves approximately 66,500 residential customers.

A report produced by Appalachian Voices in early 2014 found that a larger portion of BRE members’ income goes to utility bills than the national average. If Blue Ridge Electric offered on-bill financing, and, if just 1 percent of its residential customers took a $7,500 loan:

Several businesses already focus on weatherization and energy efficiency improvements in the High Country, and could see their businesses grow if an on-bill finance program were in place. “If there were financing available, I would be hiring local contractors to improve the homes in our local area,” says Sam Zimmerman, President of Sunny Day Homes. “It means local jobs and reduced reliance on fossil fuels while improving home value and comfort.”

With an average 23 percent poverty rate in Blue Ridge Electric’s service area, this program would help raise the market accessibility for companies such as Sunny Day Homes and reduce the cost of living for families some of whom are barely making it. “The economic benefits are dramatic for the people who get the jobs and the people who get the work done,” Zimmerman says.

Energy efficiency and on-bill financing programs would have a significant and positive impact on all of the area’s weatherization businesses says Will Hadaway, founder of HomEfficient. “My usual crew consists of myself and two others,” Hadaway remarks. “This would equate to 2/3 to 3/4 of a years worth of work for us, and that is very significant to say the least.”

Kent Walker of Blue Ridge Energy Works agrees that the program could have a significant impact and provide a steady stream of work for his business. “BRE could really stimulate the economy with this program!” says Walker.