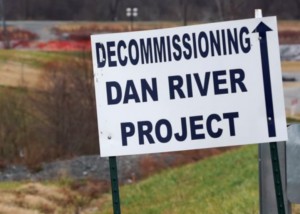 Facing federal criminal charges stemming from the Dan River spill and pollution at other sites across North Carolina, Duke will pay for its coal ash crimes.

Duke Energy likes to use a tagline that goes something like “For more than 100 years we’ve been providing customers with reliable, affordable electricity at the flip of a switch.”

It’s boilerplate, but it works. So I doubt the company will amend that punchy bit of self-praise to include “and we were recently found criminally negligent for polluting North Carolina rivers with coal ash.”

Even so, a year after the Dan River spill, Duke seems to understand that coal ash pollution has its own chapter in the company’s corporate story. Now, Duke will pay for its crimes.

The bombshell news came in two pieces around the same time last Friday; the U.S. Department of Justice announced the charges and Duke announced it struck a deal with prosecutors. A few days before the big reveal, Duke told shareholders in an earnings report that it set aside $100 million to resolve the federal investigation that began after the Dan River spill.

The company faces nine misdemeanor charges for violating the federal Clean Water Act at multiple coal ash sites across the state. On Friday, the U.S. Attorney’s Offices for the Western, Middle and Eastern Districts of North Carolina each filed charges in their respective federal courts, related to violations that occurred at coal ash ponds owned by Duke in their respective districts.

According to DOJ, Duke was criminally negligent in discharging coal ash and coal ash wastewater from storage ponds its Dan River, Asheville, Lee, and Riverbend plants into North Carolina rivers. Violations related to equipment upkeep were found at the Cape Fear Steam Station, where Duke was cited by the state for illegally pumping 61 million gallons of toxic water from a coal ash pit into the Cape Fear River last year.

The DOJ’s press release makes clear that the filing of charges is not a finding of guilt, and most prominent news outlets left any indication that Duke is guilty of its coal ash crimes out of their coverage. We decided to use the word “guilty” in our press release largely because a proposed plea agreement including millions in fines had been reached. 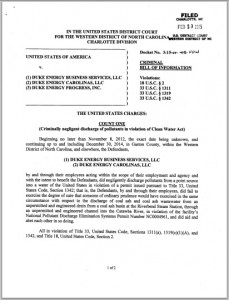 Read one of the three criminal “bills of information” detailing charges against Duke Energy (PDF).

Also, in a consent to transfer the plea and sentencing proceedings to the Eastern District court, an attorney for Duke wrote: “… the Defendants wish to plead guilty to the offenses charged.”

Of course, Duke steered clear from the words “guilty” or “plea” in its own announcement. But, as the Southern Environmental Law Center’s Frank Holleman told the Charlotte Observer, “When anyone pays $100 million to resolve a grand jury investigation, that indicates something serious happened.”

There’s still a lot of specifics we don’t know about the agreement between prosecutors and Duke. Prosecutors say they won’t comment until after court proceedings where the agreement must be approved by a federal judge.

It’s important to note, though, that this is a plea bargain to resolve a criminal investigation, not a settlement to avoid a civil trial. The proposed agreement includes $68.2 million in fines and restitution and $34 million for community service and mitigation. The fines cannot be passed on to customers, meaning Duke’s shareholders will take the hit.

Importantly, the agreement would also put Duke on probation for five years, during which a court-appointed monitor would ensure compliance with provisions related to training, audits and reporting. According to Duke, the full agreement will be made public if it is accepted by the court.

“We are sorry for the Dan River spill, and remain grateful to our friends and neighbors for your support,” Duke CEO Lynn Good said in a statement. “We are committed to moving forward in a safe and responsible way.”

For a year Duke has been saying sorry to its customers and communities along the Dan River — basically demanding that it be held to a higher standard. So even though the company is no longer in crisis mode, it’s still watching its back as it tries to repair its reputation and move beyond the spill.

The problem of coal ash pollution in North Carolina is far from resolved. According to Duke’s own assessment, 200 seeps at its power plants leak nearly 3 million gallons of polluted water into streams and rivers every year. Just yesterday, Duke was cited for contaminating groundwater at its Asheville Plant.

In addition to investigating Duke Energy, federal prosecutors subpoenaed current and former employees of the Department of Environment and Natural Resources and the North Carolina Utilities Commission, which used to regulate coal ash ponds. But none of the charges against Duke allege any improper, or illegal, dealings between the company and state regulators.

Without clarification from the U.S. Attorney’s office, it’s unclear whether the grand jury has finished its work, only finding Duke in the wrong, or if an investigation into actions of DENR is ongoing.

“While prosecutors aren’t legally obliged to explain charges they don’t file, in this case the public needs more substantial disclosures,” the Fayetteville Observer wrote in an editorial. “The Justice Department needs to let us know whether a cloud of suspicion remains over DENR.”

Subscribe to the Front Porch Blog to receive regular updates.