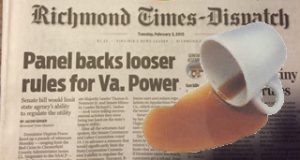 An overwhelming majority of Virginians say they want the state to develop a plan that reduces carbon pollution and increases cleaner sources of energy that will help create jobs and boost the economy, according to a poll released today.

It’s good news, and it confirms what we hear almost every day in our conversations with citizens of the commonwealth. It also aligns with a growing body of public opinion research ­— Americans increasingly understand that carbon pollution harms our health and environment and is causing global warming. They also get that shifting to clean energy sources will yield not only environmental protection, but also tremendous economic benefits.

Today’s poll was conducted jointly by two national firms — one Democratic and one Republican — for the Natural Resources Defense Council. Four hundred Virginia voters were surveyed during the second week of January, just as the General Assembly was mired in a slew of industry-backed bills that would thwart efforts to move Virginia toward cleaner energy. (It never ceases to amaze how tone-deaf legislators can be when it comes to the vox populi on environmental issues.)

A few more highlights from the poll, but it’s worth taking a look at the summary:

64% of Virginians support the U.S. Environmental Protection Agency’s “Clean Power Plan” to reduce carbon pollution from existing power plants.
83% want Virginia in the driver’s seat in developing ways to meet EPA’s goals. Support in the Roanoke/Lynchburg area (the western-most area that was polled) is 79%.
95% of all Virginians support increased energy efficiency to meet our future needs.
88% support boosting the state’s use of renewable power, including wind and solar.
Hannah Wiegard, our Virginia Campaign Coordinator, is in Richmond today, joining our allies to ensure that our elected officials see these results as they consider key legislation.