An interview with Christopher Scotton, author of “Secret Wisdom of the Earth” 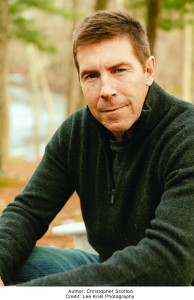 “Secret Wisdom of the Earth,” the debut novel by Christopher Scotton released this week, is a coming-of-age story that takes familiar themes — tragedy and the quest to find healing — and explores them with the backdrop of a Central Appalachian community beset by mountaintop removal coal mining.

Set in 1985 in the fictional Medgar, Ky., a richly conceived town full of even richer characters, “Secret Wisdom of the Earth” traces the summer 14-year-old Kevin Gillooly spent at his mother’s childhood home in the mountains, as he comes to grips with the tragic death of his younger brother.

With Kevin as the narrator, Scotton weaves together stories spanning generations of Medgar residents, close friends and unabashed enemies, including many who are struggling with questions of identity and whether or not to abide by the bounds of tradition.

Mountaintop removal, at first, is depicted as a pervasive but rarely-seen evil encroaching on Medgar, with a prideful, blustering coal baron acquiring more and more land surrounding the town. Ultimately, however, it’s the friction created in the small community by mountaintop removal that precipitates a spellbinding story of family, friendship and overcoming the odds that will change Kevin’s life and the town of Medgar forever.

Released on Jan. 6, the ambitious novel is popping up on lists of new and noteworthy titles and editor’s picks. On Jan. 11, Scotton will start a 15-date reading tour, stopping in many cities in Appalachia and across the Southeast.

After reading an early release of the novel, we spoke with Scotton about its heartrending themes, its Appalachian setting and his enduring relationship to the region.

Brian Sewell: You started working on the novel more than a decade ago. Looking back, can you talk about how you initially conceived of the story and went about shaping it into the novel we get to enjoy today?

Christopher Scotton: The kernel of the idea came to me when I was in my twenties. I met a friend’s mother, who was this beautiful women that had this intrinsic sadness about her. I don’t know if you’ve met people like that that have a facade of happiness, but in their unguarded moments you can see that there’s something not quite right. I asked my friend about it and he told me the story of how his older brother died. This was before he was born and his older brother was three and died in the most horrific accident in their front yard that you could possibly imagine, and 30 years later the mom who witnessed it still hadn’t healed. I was so absolutely aghast by that and I knew I had to write a novel about it; how could you ever possibly heal from that?

Now that I’ve become a parent many years later I can understand exactly why she would often look through me when I was talking to her at some place in the past. And now I know why, because you can’t fully heal from something like that. That spurred the idea in my head to write a novel about that awful tragedy and its effect on a family. I wanted to write a coming of age novel so I thought that having Kevin as the narrator, having him recover from that tragedy I figured would make a good story. A parent could never really recover, but maybe a sibling could.

The next question was setting. Do I locate it in the suburbs, where I grew up? When I was in my twenties, I was doing a lot of backpacking, camping and backcountry survival stuff with my college friends and I just fell in love with Appalachia. As I visited the region, I just fell in love with the people and the mountains. It’s such a beautiful place. I went down to eastern Kentucky and realized the paradox of that particular part of Appalachia and thought it would make a good backdrop for Kevin’s story.

I really didn’t connect mountaintop removal to it right away. I had started writing a story centered in eastern Kentucky. The tragedy was there, I had developed the characters, but I hit a narrative logjam and nothing was connecting. I went down to eastern Kentucky for research again and saw my first mountaintop removal mine and could not believe that this practice was allowed to go on. Once I saw that, it all clicked in; the permanent loss of the mountains in eastern Kentucky became so obviously allegorical to the loss that the main characters feel. Once I connected those two together, the rest of the story flowed so easily.

BS: Tell us about some of the other characters such as Kevin’s grandfather Pops that we really get to know. Did they emanate from the setting itself or personal experiences?

CS: I spent a lot of time in eastern Kentucky just meeting folks and listening to their stories and getting to know them. In small towns throughout Appalachia, you just meet wonderful, quirky, interesting people who you want to write about because they’re so real and interesting. You also meet some awful people, just like everywhere else. You meet wonderful people and awful people in New York City too. There are pockets of beauty and pockets of evil absolutely everywhere. A lot of the town characters that I wrote about are just folks that I observed and met while in Kentucky. 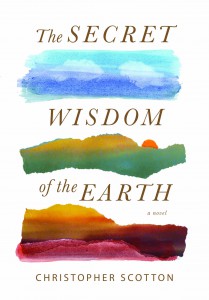 “Secret Wisdom of the Earth”, the debut novel of Christopher Scotton, is out this week. Cover photo courtesy of Grand Central Publishing.

I didn’t have a grandfather like Pops in my life when I was an adolescent. Pops is the grandfather I wish I had and the grandfather that I hope to become; a kind of amalgamation of those two people. Everyone needs a wise mentor in their life and I didn’t have one growing up. Kevin certainly requires it given the tragedy he’s gone through. Adolescence is hard enough, even in the best of circumstances. But when you’ve gone through something like he’s gone through and layer on the guilt from his father, you need someone who can ground you, and Pops definitely does that for him.

BS: Characters like Pops challenge the simplistic images of Appalachian prevalent in media and pop culture. Could you remark on the different brands of wisdom found in the book?

CS: You could argue that in the novel there are several stereotypical characters; Paul is a gay hairdresser and you can’t get much more stereotypical than that. But the reality is that there are elements of truth in stereotypes and you see that everywhere. One thing that my trips down to eastern Kentucky, West Virginia and Virginia really taught me is that, sure, there are stereotypical folks in that region but there are many folks that don’t fit that mold and they’re probably there in equal measure. There is wisdom in both.

Pops is someone who loves the land and has the capacity to listen to the earth. He goes off by himself into the woods and just is, existing in the woods by himself. At times in my life when I have done that, when I’m off camping by myself for a few days, I listen to the earth and appreciate the earth in ways that you can’t from an office or even camping with friends. You gain so much wisdom and appreciation for how complex and interconnected the earth is when you do that.

The people in Appalachia tend to be rich just in and of itself. If a capable writer can create good characters, they can do that in any setting and any plot. Appalachia gave me great material to work with and I’m very thankful for that.

BS: You introduce mountaintop removal from an almost innocent perspective. From Kevin’s perspective it’s this off-in-the-distance, over-a-couple-of-ridgelines thing going on. But as you get deeper into the book and Kevin grows into the community, you get closer and closer to the destruction.

CS: Kevin’s experience with mountaintop removal is very similar to mine. I visited the region, eastern Kentucky specifically, three or four times before I had seen a mountaintop removal mine. I had been camping and backpacking extensively but never come across it. You really don’t see it until you get off-trail. I had no sense of what was going on.

I was down in Williamson, W.Va., and heard an explosion and asked someone what’s going on and they described the blasting. That Sunday, I snuck through a fence and climbed through the woods and came to the edge of the operation and looked over two miles of moonscape. It disgusted me. So Kevin’s experience was very much my experience.

BS: Something the novel does well, considering when it takes place, is looking at mountaintop removal as a human issue and a little-understood emerging threat that’s dividing the communities where it’s taking place.

CS: After I saw the mountaintop removal mine, I probably asked someone, “Do you have any idea what they’re doing up there?” But you talk to someone whose family member works up there, they have a very different perspective. I was struck by how it divided the folks that I talked to. I thought that was a really sad and interesting aspect of it. Those that live near it and have the put up with the devastation often hate it, but some of them have relatives that work in the mines so it really is a sad paradox.

Now the pendulum has swung to where, in towns beset by large mining operations, there seems to be a majority of folks that really don’t want it there. It’s gotten so far out of control and the damage is so well documented by organizations like yours. Certainly in 1985, when the novel takes place, and even in 2000, when I was doing the bulk of the mountaintop removal site work, there was less understanding of the damage.

BS: What’s your relationship to the region after writing “Secret Wisdom of the Earth?”

CS: Calling it a second home wouldn’t be accurate because I don’t visit as much as I would like. But I feel a kinship with eastern Kentucky and with the people there because, without their help and support and endorsement, I couldn’t have created this world in my head to tell Kevin’s story. I feel a tremendous connection to that region and the people. I’m so looking forward to spending time in the region and getting to know it again.

BS: You’re heading back to the region to do a reading soon. Have you gotten a lot of positive feedback from readers in Appalachia?

CS: A lady from a major coal-mining county in Kentucky who told me, “You did this region proud.” That was the best praise I think I’ve gotten — from someone who is from the area and felt I did the region justice, dealing with the region with humanity and with truth.