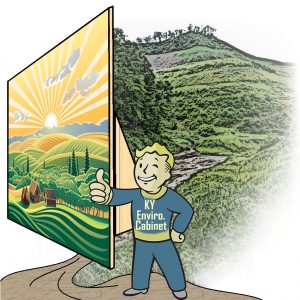 Kentucky’s environmental regulators can’t have it both ways. On one hand, the Kentucky Energy and Environment Cabinet claims it does not have enough funding to do its job. On the other hand, it says it’s doing its job just fine.

Long-standing failures of the cabinet, which regulates coal mines and other polluters, have become even more evident in light of new legal action brought by Appalachian Voices and our partners and a recent court ruling.

In a scathing opinion issued Nov. 24, Franklin Circuit Court Judge Phillip Shepherd rejected two settlements that the cabinet had reached with Frasure Creek Mining for submitting false water pollution reports several years ago. A week before Judge Shepherd’s rulings, we had filed a Notice of Intent to Sue Frasure Creek for again submitting false reports in 2013 and 2014 that again went unnoticed by the cabinet.

Not Just a Matter of Money

For years, despite clear and persistent evidence of problems, the cabinet repeatedly claimed to be fulfilling its duties under the Clean Water Act. But it was ignoring the underlying problems, including potentially illegal water pollution discharges masked by false reporting.

In response to our recent notice that Frasure Creek has perpetrated some 28,000 new violations of the Clean Water Act, the cabinet issued a press release that essentially claimed it has everything under control. The cabinet says it’s focusing on “violations as submitted” on water monitoring reports, ignoring the fact that those reports are false or could even be fraud. The release goes on to defend the cabinet’s settlements with Frasure Creek — the ones later thrown out by Judge Shepherd — and said the cabinet had been looking into Frasure Creek’s more recent violations:

The Division of Enforcement within the Cabinet has been monitoring compliance with the April 13, 2013 Agreed Order with Frasure Creek and initiated an internal compliance review in January 2014 that has identified violations as submitted on DMRs [Discharge Monitoring Reports] to the agency. Administrative action on those violations is ongoing and is pending within the agency.

Seeking to understand the validity of these claims, our lawyers submitted a formal request for the information on the cabinet’s “internal compliance review.”

In a bold showing of its own incompetence, the cabinet asked us to clarify what we meant by “[v]iolations ‘mentioned in’ the press release.” It appeared that they did not even know what they were referring to in their own press release.

Once we clarified our request, we received this convoluted response:

The phrase ‘internal compliance review’ that was used in the November 17, 2014 press release is a term used to describe the primary function of staff in the Compliance and Operations Branch of the Division of Enforcement (DENF)…. The phrase does not encompass a specific period of time with dates certain for beginning and ending the compliance process, but it is used within DENF to refer to any ongoing review. With respect to Frasure Creek, our compliance review is ongoing and underway at this time, but it has not progressed to the point where NOVs [Notices Of Violation] have been issued or referrals for enforcement action have been generated.

The fact that the agency is strapped for cash has never been in question — even Judge Shepherd agrees. As he stated in his recent ruling:

Commissioner Scott further testified that the cabinet has been subjected to a series of major budget cuts during the last 10 years that have drastically and adversely affected the ability of the cabinet to do its job in implementing the Clean Water Act.

[T]he record in this case makes it abundantly clear that the Cabinet simply lacks the personnel and budget to effectively investigate and enforce these requirements of law.

But it’s not a lack of funding keeping the cabinet from effectively enforcing laws as much as a lack of will.

You would think that if the cabinet truly were intent on protecting the environment, they would have punished Frasure Creek to make an example of the company, rather than wasting taxpayer dollars trying to prevent citizen involvement in this case. You would also think that the cabinet wouldn’t spend its limited resources on unsuccessful legal challenges to the Environmental Protection Agency’s guidance on conductivity pollution from coal mines, or weakening water quality standards for selenium, a common coal mining pollutant. 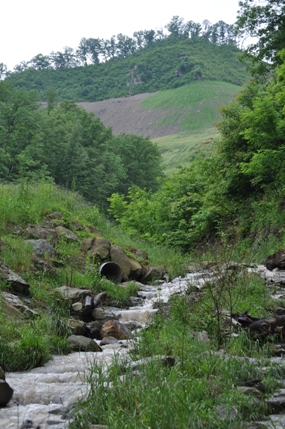 Brown water at a Frasure Creek Mine. This is one of the discharge points that the company submitted false data for.

The cabinet serves at the pleasure of Gov. Steve Beshear, whose strong pro-coal attitude is without doubt. In one State of the State address, Beshear went so far as to say, “Washington bureaucrats continue to try to impose arbitrary and unreasonable regulations on the mining of coal. And to them I say, ‘Get off our backs!’”

When elected officials are beholden to a single industry, as many are in Central Appalachia, it’s no surprise that regulators would be easy on that industry. But the level of corporate influence in Kentucky is out of control. Coal companies should not be able to flout the law without fear of serious prosecution. And whether the bosses like it or not, the cabinet still has the legal duty to uphold the Clean Water Act.

Could Criminal Charges Be in Store for Frasure Creek?

The cabinet and other Kentucky officials have generally ignored or dismissed the possibility that the false reporting was intentional fraud. But recent cases of laboratory fraud in West Virginia make criminal prosecution seem more feasible. One case involved discharges from coal mines where a lab employee was collecting water samples from a “honey hole,” a spot known to have good water quality, rather than from the actual pollution discharges. In another, a contract employee was reusing data from previous water monitoring reports because they had failed to pay their laboratory.

In a statement that indicates a criminal investigation should ensue, Judge Shepherd wrote:

The conditions observed by the cabinet’s inspectors during the performance audit of Frasure Creeks’ so-called “laboratory” demonstrated either a plan or scheme to submit fraudulent information in the DMRs or incompetence so staggering as to defy belief.

Kentucky Attorney General and gubernatorial hopeful Jack Conway has vowed to look into the new Frasure Creek violations. But several years ago, his team looked into the previous violations and told reporter Ronnie Ellis that they couldn’t find anything “that rises to the level of intent or criminal fraud that’s ready to be prosecuted.”

The cabinet’s dismissive attitude toward the seriousness of environmental problems in Kentucky is unsurprising given the state’s political climate, not to mention the fact that the Frasure Creek cases expose the agency’s utter incompetence. But the jig is up. It’s time for the cabinet to either start doing its job or step aside and let the EPA do it instead.