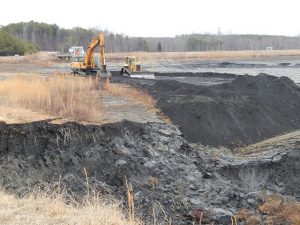 In two weeks, the U.S. Environmental Protection Agency will finally release the first-ever rule regulating the storage and disposal of coal ash, a toxic byproduct of burning coal. For years, communities and environmental groups across the country have pushed the EPA to finalize the regulations, and now, due to a court ordered mandate, the rules are expected to be released on Dec. 19.

In the years following the 2008 TVA coal ash spill in Kingston, Tenn., the EPA repeatedly delayed finalizing a coal ash rule, allowing the dangerous waste to sit in unlined landfills and contaminate groundwater at sites across the country. As a result, there have been more coal ash disasters, including the February 2014 spill into the Dan River at Duke Energy’s plant in Eden, N.C. A new study conducted by Wake Forest University research biologist Dennis Lemly puts the cost of the Dan River spill at $300 million.

Spurred by the devastating Dan River spill, enormous public outcry, and a federal criminal investigation into the ties between Duke Energy and the N.C. Department of Environment and Natural Resources, state lawmakers set about writing their own coal ash regulations prior to the EPA rule’s release. The result was not what North Carolinians hoped for.

The Coal Ash Management Act, which became law in September without Gov. Pat McCrory’s signature, only requires the full cleanup of four out of the 14 coal ash storage sites in the state. The fates of the remaining 10, including Belews Creek (home to the the largest coal ash deposits in the state) have been left in the hands of a Coal Ash Commission, which may allow sites to be capped in place, a method of coal ash storage that does not eliminate the possibility of groundwater contamination.

McCrory did not sign the bill because he felt that the Coal Ash Commission was unconstitutional since a majority of its members were appointed by legislators and not the governor. On Nov. 13, McCrory and former governors James Hunt and James Martin sued the General Assembly, stating that the commission has been tasked with carrying out executive branch functions, as well as functions normally overseen by state agencies such as DENR. Speaker of the House Thom Tillis and Senate President Pro Tempore Phil Berger, who are listed as defendants in the case, issued a statement opposing McCrory’s lawsuit as costly and time-consuming.

Despite the weaknesses of the Coal Ash Management Act, the law has already forced Duke Energy to begin cleaning up the coal ash at four high-priority sites, and to submit preliminary cleanup plans and groundwater assessment plans for the remaining 10. But now new controversies are emerging over where the company plans to relocate its waste.

Last month, Duke announced plans to move 2.9 million tons of ash from its Riverbend and Sutton plants to former clay mines in Chatham County and Lee County. Citizens in both counties are upset by the proposal, stating that they feel blindsided and citing the lack of an environmental or health impact study as problematic. In Chatham County, some residents already live near coal ash ponds located at Duke’s Cape Fear plant, which are not currently designated for cleanup.

Duke Energy contends that the clay mines are ideal for coal ash storage because of their close proximity to railways and the added environmental protection of impervious clay. The company says it will put in liners and install groundwater monitoring systems at the sites.

Under the Coal Ash Management Act, millions of tons of coal ash precariously stored along North Carolina’s waterways will have to be moved somewhere. But the unfortunate reality of the law is that many previously unburdened communities and others already burdened by toxic waste dumps may be forced to house some of the ash. Ideally, most of the coal ash will remain on Duke Energy-owned property, but what cannot safely stay on Duke’s land will have to go somewhere. Every North Carolinian has a ton of coal ash to their name, but not every North Carolinian will have to deal with their ton.

In addition to considering new landfill sites, Duke Energy is also looking into the potential of beneficial reuse of coal ash.

If the EPA’s coal ash rule is weak, it will not protect communities from potentially dangerous coal ash landfills or coal ash reuse. Though there are no ideal solutions for the toxic waste, moving forward with the understanding that the substance is indeed hazardous would lead to more safeguards for human health.

If you haven’t already, take a moment to think about why you care about coal ash pollution and explore this topic with others. As North Carolina and the rest of the country move toward coal ash cleanup, it’s more important than ever for us to stand united to demand the safest storage possible.