{ Editor’s Note } A 2014 study on post-mining reclamation efforts found that “There is no evidence that mitigation is meeting the objectives of the [Clean Water Act] and looking forward there is no reason to believe this will change unless new mitigation requirements and scientifically rigorous assessments are put into place.”

It seems that whenever a picture of an active mountaintop removal mine site is posted online or shared on social media, someone steps in to comment that coal companies “put it back” or that, a few years after they reclaim the land “you won’t be able to tell the difference.”

For years, Appalachian Voices has been combating misleading claims about reclamation used by the industry and pro-coal politicians — especially the myth that mountaintop removal is necessary because it creates flat land for economic development. In a 2010 survey of mountaintop removal sites, we found that, of the 1.2 million acres of leveled Appalachian mountains, around 90 percent of reclaimed mine sites are not being used for economic development. In fact, most are just rocky grasslands not being used for anything at all. 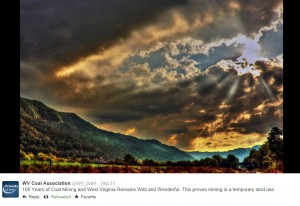 The industry argues that it does a good job of reclaiming the land, and will use a handful of good examples of reclamation with a few nice pictures, and pretend that this is the norm. I particularly like this tweet from the West Virginia Coal Association a few weeks back.

As you can see it’s basically a pretty picture of the sun coming through the clouds with a caption that reads “100 Years of Coal Mining and West Virginia Remains Wild and Wonderful. This proves mining is a temporary land use.”

I can’t figure out how this picture “proves mining is a temporary land use.” I suppose the picture shows that companies have not blown up those particular mountains. Or the sky.

The reality of reclamation usually looks more like this… 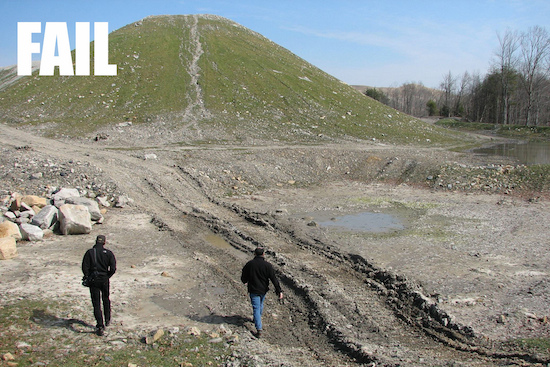 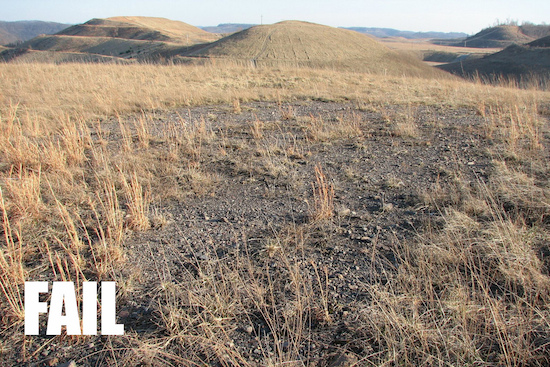 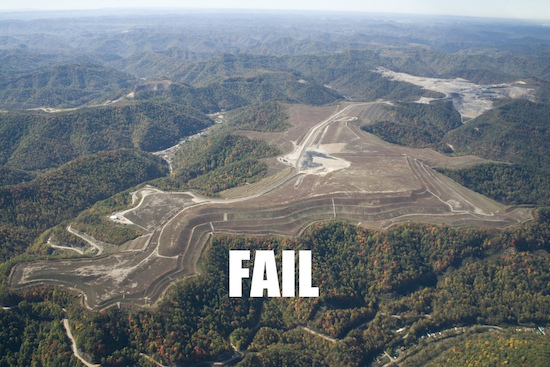 The failure to recapture the beauty that was once a 300-million-year-old mountain covered in old-growth, biodiverse forest is tragic, but it’s not the only problem with reclamation. Attempts to mitigate water pollution have repeatedly failed.

A 2014 University of Maryland study shows that mitigation and reclamation have totally failed to protect stream health.

According to the study:

Loss of aquatic biodiversity below [mountaintop removal] mining operations is well documented and there is no evidence that these downstream impacts decline over time–mine sites reclaimed over 20 years ago still contribute to significant degradation of water quality.

Overall the reports provide no evidence that stream mitigations being implemented for coal mining in the southern Appalachian states of Kentucky, Tennessee, Virginia, and West Virginia are meeting the objectives of the Clean Water Act to replace lost or degraded natural resource values and functions.

The coal industry is blowing up mountains in Appalachia. They are not putting them back together again. The industry is polluting and burying streams, and they are not finding a way to fix them.

In 2009, the Obama administration promised to overhaul regulations meant to protect Appalachian communities and their waterways from mountaintop removal.

Yet, five years later, mountaintop removal coal mining is still happening. Until the Obama administration and Congress take serious actions, no amount of reclamation is going to fix the problems the mining is leaving behind.