Colossal Conifers: The Quest to Restore the Mighty Hemlock 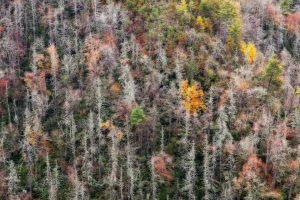  “Forest Ghosts” photo by Daniel Burleson; Winner of the Our Ecological Footprint Category at the 2014 Appalachian Mountain Photography Competition. A view of the Bynum Bluff trail in North Carolina’s Linville Gorge shows how destructive a non-native insect can be to an entire tree species.

The forests of central and southern Appalachia are recognized as some of the most biologically diverse ecosystems in the world. In the southern portion of this heavily forested mountain range exists a pristine temperate rainforest that feeds crystal-clear mountain streams and mighty whitewater tributaries, all of which host a dizzying array of aquatic life. Also present are rare ferns and mosses, copious wildflowers and more species of trees — poplars, hemlocks, and rhododendron among them — than can be found in all of Europe.

The central portion of the Appalachian Mountains is equally impressive, boasting contiguous stretches of forest that provide recreation and clean drinking water for people in Richmond, Baltimore, Washington, D.C., and other heavily populated urban centers. Forests here act as an interface, merging the colder conditions of the northern Appalachian mountains with the temperate rainforest of the South. Trees range from stands of towering conifers such as the Eastern hemlock and white pine to deciduous forests full of oak, hickory and maple.

According to David Walker, a research associate with the Virginia Tech Department of Forestry, the forests of Appalachia are resilient and remain generally healthy despite the litany of environmental issues brought about by human pollution and encroachment.

“It’s important to remember that our forests are dynamic, not static,” Walker says. “They face a variety of different threats coming from numerous angles — many of which are human causes — but, they have a remarkable ability to respond and adapt.”

Walker says the most pressing challenges come from deforestation projects and urban expansion, but he has spent much of his career studying the effects of another threat, this one posed by a tiny invasive pest known as the hemlock wooly adelgid.

The Disappearance of an Old-Growth Legacy

Few organisms play a larger or more ecologically prominent role in central and southern Appalachia than the mighty hemlock tree. Whether it’s the Eastern hemlock, known for a range that stretches from Canada and Minnesota to parts of Georgia and Alabama, or the less-prolific Carolina hemlock, found primarily in western North Carolina and Virginia, this colossal conifer is a foundational species in just about every ecosystem where it takes up roots.

As one of the longest-lived and tallest old-growth trees in the region, the Eastern hemlock is often referred to as the “Redwood of the East” and is known to boast life spans of some 500 years while reaching heights in excess of 150 feet.

More important than their profound beauty, however, is the essential and irreplaceable habitat that these majestic trees provide. They grow in clusters near mountain streams and rivers, supplying deep shade and stabilizing soil, keeping water clear and free of sediment.

In the heart of winter they harbor snow in their evergreen canopies, freeing up much of the forest floor below and facilitating foot travel for whitetail deer and other mammals. All told, the hemlock has a positive impact on the lives of some 120 wildlife species throughout Eastern North America, making it a critical keystone species and a life-sustaining force. Without its presence, the forests of Appalachia would be permanently and irrevocably altered.

Tragically, the mighty hemlock is beginning to disappear from the ancient forests of southern and central Appalachia. The culprit? An exotic and near-microscopic insect known as the hemlock woolly adelgid.

The hemlock woolly adelgid is a tiny, sap-sucking aphid-like creature that takes up residence at the base of the hemlock’s needles, ultimately robbing them of the nutrient-rich material the tree depends on for survival. Aside from eventual tree death, the pest’s existence is evidenced only by the white, cottony ova sacs that develop on the underside of infected hemlock branches. The negative effects of the wooly adelgid are compounded by the fact that it’s an invasive species with no native predators to help quell its devastating and rapid spread.

A Forest Fixture Fights for Survival

The plight of the modern hemlock is a heartbreaking tale that began sometime in the early 1920s.

“We know from DNA research that the adelgid originated in southern Japan, and was apparently brought over on ornamental weeping hemlocks in the early 1900’s,” says Dr. Patrick Horan.

Horan is a professor emeritus from the University of Georgia. After retiring he moved to the mountains of western North Carolina with his wife and shifted the full force of his focus to the hemlock-adelgid issue. He now operates a website, called SavingHemlocks.org, meant to raise awareness about the adelgid and aid private landowners seeking to restore their hemlock populations.

According to Horan, the hemlock wooly adelgid was distributed to horticultural sites across the eastern seaboard after its initial arrival in the U.S. One such site — a private arboretum just outside Richmond, Va. — was officially recognized as the first spot to harbor adelgids by the U.S. Department of Agriculture in 1951.

“The small adelgid colony discovered by USDA in 1951 was outside the native hemlock range,” Horan says. “But it was allowed to spread northward and observed on wild hemlocks in Virginia as early as 1970. These early Virginia populations formed a huge infestation in the Shenandoah Valley by the 1980s, and eventually formed the population base for an avalanche that cascaded down into the southern Appalachians.”

It wasn’t until the early ’90s that government land agencies in the South began focusing on the inevitable arrival of adelgids in their neck of the woods. By then it was far too late, and the lack of action allowed the invasive bug to take up far-reaching roots throughout the hemlock’s southern range. Southern hemlocks — completely defenseless against the adelgid’s onslaught — began to die off in massive quantities. Groves that had once harbored massive stands of old growth — some as tall 170 feet — became little more than haunting, skeletal reflections of their former glory.

Forestry experts and botanists were forced to stand by helplessly and watch as these ancient behemoths were brought to their knees by an invasive pest no bigger than a pinprick. One person who witnessed the hemlock’s early destruction first hand was a young botanist by the name of Will Blozan.

Today, Blozan is the president of the Eastern Native Tree Association as well as Appalachian Arborist, Inc. But in those days he worked as a forest technician in Great Smoky Mountains National Park, assigned to a small task force responsible for mapping large old growth trees while preparing the park’s hemlocks for the inevitable arrival of adelgids from the north. Blozan knew that an infestation was fast approaching years before it actually happened, but the knowledge did little to soften the blow once the day finally arrived. 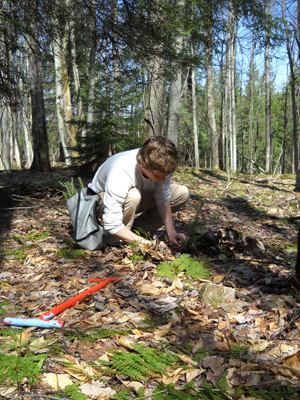 A red spruce seedling is carefully placed into the ground. Photo courtesy The Nature Conservancy.

“In a wilderness area in South Carolina on Dec. 3, 2001, I was climbing a tree that I hoped would break the world height record for Eastern hemlock,” Blozan wrote in an article for American Forests magazine in 2011. “While descending a 167.7-foot hemlock called the East Fork Spire, I brushed up against a branch and noticed a woolly fluff on my jacket. I then realized that the hemlock woolly adelgid had officially arrived in my woods, and received word a few months later that adelgids had been discovered in the Smokies.

“By 2004, the East Fork Spire was dead. By 2005, virtually all of the groves I had mapped in the Old-Growth Project were infested. By 2007, they were essentially dead,” Blozan wrote.

“Those lush, deep green cathedrals of ancient hemlocks — some with trees over 500 years old — were now sun-baked stands of gray skeletons. The results of centuries of undisturbed growth were erased in a mere four years, and my own forest legacy was rapidly disappearing.”

Because adelgids were allowed to thrive for more than 50 years completely unchecked, they have done an alarming amount of damage to hemlock forests throughout the Eastern United States, but there is still hope. Now that the issues presented by this invasive pest are being addressed and scientific resources are being directed at the problem, certain control methods are beginning to contain populations at more manageable levels.

Chemical treatments with pesticides, such as Merit 75 WP, are common and usually implemented by way of ground drenching or root injections, and insecticidal soaps and horticultural oils are often sprayed in heavy applications throughout a tree’s foliage. While these methods aid in short-term hemlock restoration, many biologists feel that the future of hemlock survival lies in a more organic method known as biological control.

Biological control methods seek to stop the adelgid’s spread by introducing natural predators to its habitat. Dr. Richard McDonald is a North Carolina-based entomologist who has focused on controlling the spread of adelgids for more than a decade. According to him, the only way to fight adelgids on a long-term scale is by releasing predator beetles that kill the invasive pest at a high rate, thus causing their populations to dwindle and giving hemlocks a fighting chance.

Imported beetles from Asia have been in use since 1995, but it wasn’t until recently that scientists discovered native populations of adelgid-killing beetles in the United States.

“In 2007 the DNA results came in,” McDonald says. “It turned out the adelgids from the Pacific Northwest ‘were their own native lineage.’ Once we heard these words, we began looking inside our own borders for most of the answers concerning predatory beetles.”

One of the native predators that McDonald champions is a small beetle known by the scientific name of Laricobius nigrinus.

L. nigrinus is significant because it arrives on the scene in mid-October and remains present throughout the month of May, targeting the notoriously unmanageable winter generations of adelgids that have been wreaking havoc on Southern Appalachian hemlocks for decades.

Researchers at Virginia Tech have studied this beetle since 1997, and McDonald has distributed it throughout southern Appalachia since 2003. Since then, L. nigrinus has spread much faster than anticipated.

McDonald also played a vital role in the discovery of another predatory beetle — Scymnus coniferarum. Unlike L. nigrinus, S. coniferarum feeds on adelgids throughout the summer months.

“Once you have both the winter and summer predators present on hemlocks, this mimics the system nature has put in place wherever hemlocks occur naturally,” McDonald says.

“The beetles go to work and knock adelgid numbers down to manageable levels.”

While there has been a substantial amount of success using chemical controls to supplement biological ones, McDonald is uneasy about the use of pesticides and somewhat wary about introducing predator beetles that are not native to North America. He says that L. nigrinus and the aforementioned S. coniferarum pose far less risk of wreaking their own form of invasive havoc on the landscape.

Issues like those posed by the hemlock wooly adelgid are occurring all over the forests of central and southern Appalachia, and time is running out for species like the Eastern and Carolina hemlocks. Luckily, wherever these threats arise, there are usually hardworking folks like Dr. Richard McDonald, dedicated to preserving and restoring the land for the benefit of future generations.

“The program works,” McDonald says. “And we need to get the word out in order to save as many of the region’s hemlocks as possible. If we can organize quickly we can still save many hemlocks and all the other plants and animals that depend upon hemlocks for survival.”