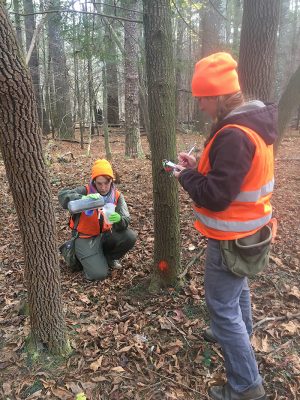 The hemlock woolly adelgid is now in every Appalachian state. Its broad range has also mobilized a wide array of efforts to fight it.


Margot Wallston serves as coordinator of the Hemlock Restoration Initiative, which aims to protect North Carolina’s hemlocks from the pest. The initiative is funded in part by the N.C. Department of Agriculture and U.S. Forest Service and is a program of the Asheville-based nonprofit organization WNC Communities.

The adelgid was first detected in North Carolina around 1995. At the time, the trees were stressed by drought and especially susceptible to the adelgid, which allowed the insect to gain a strong foothold in the state.

Initial efforts to treat trees with pesticides were expensive and, in hindsight, involved more chemical applications than necessary.

“A lot of the trees that are left that look like healthy, lovely hemlock trees are there because people decided to make the investment in chemically treating them,” Wallston explains. “Over time, we’ve learned more about how to use those pesticides, how often we need to use them and really how much is required to have an effective treatment without dousing the tree in excessive amounts.”

But, she says, chemical treatment “is still our No. 1 tool for ensuring that an individual tree does not succumb to hemlock woolly adelgid.”

The initiative works with state agencies and volunteers to try and provide every surviving tree on the state’s public lands a quick, basic chemical treatment, based on the understanding that even one exposure to pesticides can make a big difference.

“Sometimes land managers haven’t been able to get out to re-treat trees for 10 years and those trees still look so much better than all the ones that never got treated,” Wallston says. “They’re green and they’re thriving whereas their neighbors aren’t.”

In 2017, in partnership with N.C. Forest Service programs, the Hemlock Restoration Initiative treated over 11,500 Eastern and Carolina hemlock trees on state forests, parks and game lands, according to Wallston. The National Parks Service and the Kentucky and Tennessee state divisions of forestry have similar programs underway. 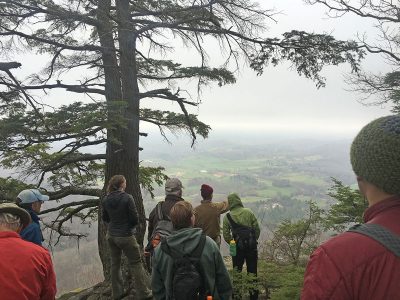 Like many land managers across the region, Wallston and her partners are using a variety of tools in their efforts to arrest the adelgid’s spread.

“As a state, we’ve been working on integrating more biological control in the form of predators that will consume hemlock woolly adelgid and create natural predator-prey balance,” she says.

The initiative also supports scientists with the North Carolina-based Forest Restoration Alliance who are trying to breed a hybrid between native hemlocks and Chinese adelgid-resistant hemlocks and understand why some native trees are able to withstand the pest while neighboring trees succumb. Researchers are also studying the most effective way to plant and raise young hemlocks in the forest.

“All the hemlocks are not dead,” Wallston says. “We are definitely going to protect pockets of hemlocks, and the hemlock will persist across the landscape.”

Be a Hemlock Helper

Treat your trees: The Hemlock Restoration Initiative’s Margot Wallston says that applying chemical treatments is the most effective way to defend individual hemlocks from the woolly adelgid, and advises residents not to overlook young, understory trees.

She explains that the cost of chemical treatment has dropped dramatically over time — large trees can be treated for a few dollars, and little ones might cost pennies. “[Landowners] don’t need to hire anybody if they are comfortable doing it on their own and they only have to do the treatments every several years instead of every year or every other year as initially thought,” she says.

Wallston discourages most individuals from using predator beetles, noting that it’s an expensive option and there’s no guarantee beetles will stay on a specific property.

Take a picture: Come across a healthy hemlock in the woods, surrounded by trees that have succumbed to the woolly adelgid? Upload a photo via the Tree Snap app to share the tree’s location with researchers investigating hemlocks that are naturally resistant.

Prevent problems: Help avoid the spread of another invasive species by using only native plants in your landscaping.

For more information or to volunteer, visit the Hemlock Restoration Initiative at savehemlocksnc.org.