Across the Years: Updates from the Archives

For two decades, The Appalachian Voice has reported on environmental issues from across central and southern Appalachia. In honor of our 20th anniversary, we looked back through our archives to identify important topics that we’ve covered over the years and provide updates on where these issues stand today. 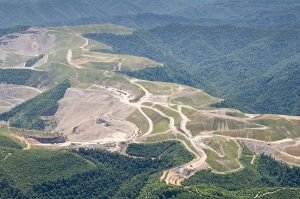 Mountaintop removal coal mining continues to threaten the mountains and rivers of Central Appalachia. This image of Kayford Mountain was taken in July 2014. Photo by Lynn Willis, courtesy of Appalachian Voices/Southwings

In our inaugural issue in Winter 1996, The Appalachian Voice ran its first story about mountaintop coal removal mining. In “A View From Kayford Mountain: ‘Seng, Ramps, And The Human Casualties of Burning Coal,” Mary Hufford wrote about a particularly destructive form of surface mining that would grow in scope over the coming years.

In Winter 2003, we once again covered the issue when Tiffany Hartung discussed the damage already being caused by a recently permitted mine on Zeb Mountain in an article called “Mountaintop Removal by any Other Name… Elk Valley residents voice concern as cross ridge mining comes to Tennessee.” For 10 years, community members and advocacy groups fought to stop this destruction, and in June 2013, we reported on their victory. After repeated violations to the Clean Water Act, a legal settlement ended mining on Zeb Mountain.

Mountaintop removal coal mining has destroyed more than 500 mountains and over one million acres in Central and Southern Appalachia to date. In recent years the pace of the mining has slowed, but the health risks to nearby communities remain significant. With many regional coal companies now going through bankruptcy, citizens and advocacy organizations are increasingly focused on ensuring that these sites are properly cleaned up and reclaimed. 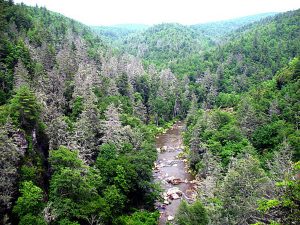 The aphid-like woolly adelgid is devastating hemlock populations in the southern Appalachians, leaving behind gray ghosts like these in the Pisgah National Forest in North Carolina. Photo by Steve Norman, courtesy of U.S. Forest Service

Hugh Irwin’s article, “Exotic Pest Invasion Threatens Many Tree Species,” in the Spring 1996 issue contained our first mention of the threat posed by the hemlock woolly adelgid. This non-native, aphid-like insect sucks the sap out of both the eastern and Carolina hemlocks and can damage or kill the trees within a few years.

Deborah Huso’s article, “Praying for a Good Predator: Biologists introduce beetles, try to save Eastern Hemlock,” in the Summer 2005 issue was one of several we’ve run over the years about the ongoing efforts to save the hemlock trees.

While the hemlock woolly adelgid is found across much of the eastern United States, its impact in the southern Appalachians has been profound. The U.S. Forest Service is combating this pest by introducing natural predators and insecticides that kill the woolly adelgid and looking for hybrid varieties of hemlocks that are more resistant to attack.

A recent study of hemlocks in North Carolina by U.S. Forest Service scientists found that once the trees are infested, more than 85 percent are dead within seven years.

A Haze Over the Great Smoky Mountains

Air pollution affects the visibility at Great Smoky Mountains National Park, as evidenced by these images of clear versus hazy days. Photos courtesy of the U.S. National Park Service

The first issue of the publication in Winter 1996 was “partly devoted to the insidious, sometimes invisible problem of air pollution” — a topic that has been a regular theme since.

The Summer 2004 issue included a story by Matt Wasson and Harvard Ayers called “And the Winner Is… America’s Most Visited Park Is Also Its Most Polluted,” which covered air pollution in Great Smoky Mountains National Park. At the time it was reported that, “Over the last five years, the Smokies have had more than 100 days when breathing is potentially dangerous due to excess ozone. Even healthy visitors and staff are warned to limit exertion of any kind on such days, including hiking and biking.”

While ozone levels remain elevated, according to the U.S. National Park Service no ozone health advisories were issued in 2013, the latest year for which records are available. 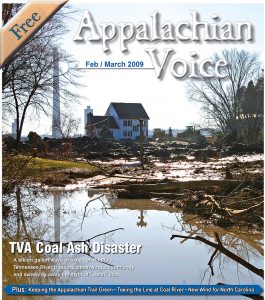 Our February/March 2009 issue focused on the disastrous coal ash spill that took place in Kingston, Tenn., on Dec. 22, 2008.

Following the catastrophic coal ash spill in late 2008 at Tennessee Valley Authority’s Kingston Fossil Plant, the February/March 2009 issue of The Appalachian Voice was devoted to this disaster that brought the problem of coal ash to national attention. We have followed the topic closely ever since.

Nearly eight years later, toxic coal ash — waste leftover from burning coal — continues to poison the region. In Alabama, communities are struggling to deal with coal ash that was transported to the area after the 2008 Kingston spill. Subsequent disasters, such as the North Carolina’s Dan River spill in 2014, keep the issue in the spotlight.

In December 2014, the U.S. Environmental Protection Agency released federal rules for disposing of coal ash, which environmental groups criticized as insufficient. Earlier that year, the N.C. General Assembly passed even stricter regulations, but many of the state’s guidelines have since been overturned. And in towns like Walnut Cove, N.C., toxic compounds are still leaching from neighboring coal ash impoundments into residents’ drinking water. The cerulean warbler’s population is in steep decline. Conservationists are working to preserve its summer habitat throughout Appalachia. Photo courtesy of the U.S. Department of Agriculture

Migratory birds took center stage in “Less Twittering in the Trees: Migratory Birds Show Alarming Population Declines,” an article from April/May 2009 by Kathleen McFadden that described how the loss of habitat, especially through forest fragmentation, was threatening populations of many migratory birds.

While many populations are still in decline, conservationists are hoping to reverse this trend. Appalachian Mountain Joint Ventures — a regional coalition of organizations and agencies working to conserve the habitat of migratory birds that was cited in the 2009 article — continues to partner with private landowners to protect the natural homes of at-risk birds.

In January 2015, the coalition was awarded federal funding for a five-year program to enhance the habitat of the cerulean warbler. This program includes funding to manage and improve 12,500 acres of forest land and 1,000 acres of reclaimed mine land in West Virginia, Pennsylvania, Kentucky, Ohio and Maryland.

Battle to Save Blair Mountain In June 2011, environmental activists gathered for the March on Blair Mountain in an effort to save the historic site from destruction from mountaintop removal coal mining.

The largest labor uprising in American history took place in late August and early September, 1921, on Blair Mountain in southern West Virginia. At that time, thousands of miners joined forces to fight for better treatment and the right to unionize.

In the Summer 2005 issue, Denise Giardina wrote an article called “The Battle of Blair Mountain… Revisited” about the ongoing struggle to save the archaeological remains of the battle from destruction by mountaintop removal coal mining.

After years of victories and defeats for conservationists, for now it seems the site will be preserved. On July 26, 2016, the U.S. Department of the Interior dropped its appeal of an earlier case, paving the way for the site to be returned the National Register of Historic Places, which will add some protection to the battlefield.

Passing on the Pipelines 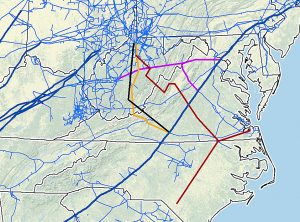 The expansion of natural gas pipelines into the Appalachian region was first mentioned in the Late Summer 2003 issue. In “Passing on the Patriot Pipeline: Duke Power Criss-Crossing New River Watershed,” Lynn Caldwell and Jeffrey Scott wrote of their fight to block a pipeline already under construction.

By the next year, the Patriot Extension was fully operational. The 95-mile pipeline is now operated by Spectra Energy, a spin-off company of Duke Energy, and extends from one natural gas pipeline in Wythe County, Va., to another pipeline in Rockingham County, N.C. On July 23, more than 600 people gathered in Richmond, Va., for the “March on the Mansion” to ask Gov. Terry McAuliffe to stand against proposed pipelines in the state.

Since then, natural gas infrastructure has expanded across Appalachia, and so has our coverage. Today, community members and environmental groups, including Appalachian Voices, are fighting to block the construction of two more proposed lines — the Mountain Valley and the Atlantic Coast Pipelines, in Virginia, West Virginia and North Carolina. For the latest, read more here.