By Matt Wasson, Ph.D., Director of Programs for Appalachian Voices

The new findings echo previous science demonstrating the negative environmental effects of mountaintop removal, a coal mining practice that uses explosives to blast away the tops of mountains to access thin seams of coal and dump the waste into valleys below. In 2010, a group of 13 prestigious biologists published a paper in the scientific journal Science that analyzed peer-reviewed studies and West Virginia water quality data. According to the paper, the group found “serious environmental impacts that mitigation practices cannot successfully address.” 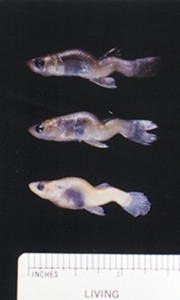 Selenium has caused grotesque deformities from s-curved spines and double-headed larvae to fish with both eyes on the same side of their heads. These fish (above) were caught at Belews Lake, N.C., which is adjacent to a Duke Energy coal-fired power plant. Photo by Dr. Dennis Lemly

The authors of the recent study, published in the peer-reviewed journal Freshwater Science, found a 50 percent decline in the number of fish species and a two-thirds decline in the total number of fish in streams below mountaintop removal mines in West Virginia’s Guyandotte River drainage.

“Our results indicate that headwater mining may be limiting fish communities by restricting the prey base available for fish,” Nathaniel Hitt, a USGS research fish biologist and lead author of the study, said in a press statement. “For instance, fish species with specialized diets of stream insects were more likely to be lost from the streams over time than fish species with more diverse diets.”

The study also indicated that water quality played a more significant role than habitat in influencing fish population health. Previous research has focused on how water quality deterioration from mountaintop removal mining has impacted aquatic insects, but the July study is the first USGS paper to examine the issue from the perspective of fish.

Declines in populations of both fish and aquatic insects indicate the declining health of an ecosystem on which all organisms depend, including people. The “ecological indicator” theory is consistent with the dozens of scientific studies published in the last few years that show communities near mountaintop removal mines suffer an array of poor health outcomes ranging from high rates of cancer, respiratory illness, heart disease and birth defects to low life expectancies that are comparable to those in developing nations like Iran, Syria, El Salvador and Vietnam.

Stream decline also has a significant impact on the economy. In Appalachia, sportfishing is a multi-billion dollar industry, creating more jobs than surface mining in each of the states where mountaintop removal mining occurs. Unlike coal, it is also a growing industry: the number of jobs it created in West Virginia more than tripled between 2001 and 2011.

The USGS study comes as the EPA and other federal agencies grapple with rules intended to protect streams from the types of pollution cited by the study’s authors.