“In crystal clear water on a sunny day, everything appears to be enlarged. The snorkeler’s facemask enlarges the fish. The plants sway in the current and the sun plays on the rippled surface of the graveled substrate,” wrote avid snorkeler Casper Cox in his book “Snorkeling in the Hidden Rivers of Southern Appalachia.” 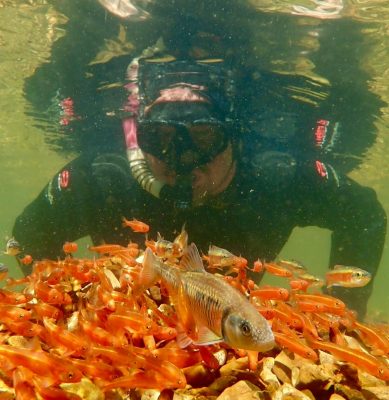 On the inside cover of “Snorkeling Hidden Rivers of Southern Appalachia,” writer and snorkel expert Casper Cox peers over a redtail chub mound active with Tennessee and striped shiners. Photo by Gary Hansell.

Cox has been exploring the rivers and streams of the Southeast for two decades. According to biodiversity maps, the region boasts the greatest diversity and number of fish species unique to the Appalachian region. He shares this beauty with others by leading snorkeling trips in cooperation with the Cherokee National Forest at several Tennessee creeks and rivers, primarily the Conasauga River. Although the Conasauga is popular among bass fishers, it also has fish unique to its waters because of its geographic isolation from the Tennessee River watershed.

“There are fish found in the Conasauga River which are found nowhere else in the world,” Cox says. These endemic species include the Conasauga logperch and the bridled darter.

One of the more unique families of fish a river snorkeler may encounter is the Nocomis genus, known as mound-building chubs. Click here to learn more about chubs!

Cox has also spotted other rare and endangered species such as blue shiners and holiday and amber darters. The Cherokee National Forest provides protection for the Conasagua, making the river a wonderful exploration site as the waters are often clear and silt-free, according to Cox.

Alongside the Conasagua, Cox has also explored the Big South Fork of the Cumberland River as well as the Hiwassee River, Little River, the Tellico River and its tributary Citico Creek, which all drain into the Mississippi River. Snorkelers in these rivers might see fish ranging in size from the tiny tangerine darter to the large and voracious longnose gar. 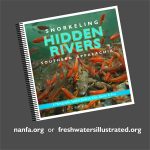 Casper Cox wrote “Snorkeling the Hidden Rivers of Southern Appalachia” as a companion piece to the film Hidden Rivers. Contents include a guide to seven snorkeling spots and information on gear, safety and environmental issues. Order a copy at FreshwatersIllustrated.org or NANFA.org.

Snorkeling is limited only by the number of clear rivers. Beginners can refer to Cox’s book for guidelines, but a few basics include being aware of safety concerns, planning the trip thoughtfully, and letting someone know where you are and when you will return. Cox also advises those new to snorkeling to participate in guided trips for their first few freshwater adventures.

Experienced snorkelers who understand the safety issues involved can engage in do-it-yourself snorkeling. Adventurers might see a hellbender in the Hiwassee River, a brook trout in the Tellico, or spot a fish they have never seen before just below the surface of a local river.

Snorkelers should be cautious of sudden water releases from dams or heavy rains that can wash them downstream with disastrous results. Additional hazards include fallen trees, rapid currents and thunderstorms.

Ten-year-old twins Kai and Cassie Cormons have been snorkeling the waterways of Virginia for a year and a half, with supervision. Their favorite spots include the North Fork of the Moormans River in Sugar Hollow and Pleasant Grove Park on the Rivanna River, where the twins enjoy chasing fish and looking at intriguing algae and rocks.

“At Sugar Hollow a couple of weeks ago I snorkeled next to this … rock ledge, and I saw a giant trout,” Kai Cormons says. 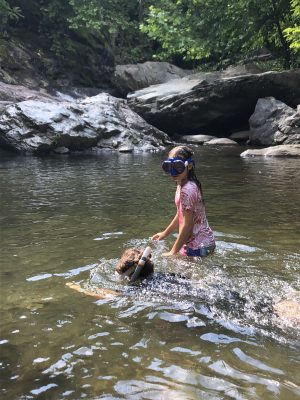 Kai and Cassie Cormons enjoy using their snorkels to explore underwater life on the North Fork of the Moormans River. Photo courtesy of Tom Cormons.

For those starting their snorkeling journey, Cassie Cormons advises snorkelers to go deep for more interesting views and creatures. Kai Cormons reminds beginners not to inhale water through their snorkel.

“Don’t go underwater and then take a breath because then you’ll get a mouth full of water and it’s just not pleasant,” he says.

The twins say that people who are curious about snorkeling “should just try it.”

The rivers of the southern Appalachian states are many and varied. They beckon novice and experienced snorkelers alike. Fish-watchers may also see crawfish, salamanders, freshwater mussels and other aquatic life. Excitement awaits for snorkelers who catch a glimpse of life beneath the water’s surface. Please snorkel safely and be respectful of the habitat these creatures depend on.

Editor’s note: The print version of this article incorrectly referred to the area where Cassie and Kai Cormons snorkel as “Sugar Hollow Reservoir.” Sugar Hollow refers to the large, beautiful valley through which the Moormans River and its two forks run. There is also a drinking water reservoir, where swimming is prohibited, just below the confluence of the two forks. Their snorkeling in Sugar Hollow is in the North Fork, not in the reservoir.